Diabetes is one of the most dangerous disease in the world and it is said that one in every nineteen people suffers from the same. The sugar level is very important for the diabetics. If it become higher than the upper limit it is dangerous, similarly if it gets lower than the target, then also it prove fatal. There was a time when it was considered as RajRog – a disease mostly seen in wealthy people; is now affecting everyone. Eating much of sweats, an undisciplined lifestyle, being a couch potato, doing very low amount of physical activity, and heredity, are amongst the common cause to get diabetic.

Some regular activities which lead to physical tiredness (for example walking or doing exercise) or taking a food intact which affect the glucose level in the body! Now that is a dramatic situation for someone who suffer from diabetes. To measure sugar level (or Glucose level), one of the measure is to test various human body fluids (like Urine or mainly Blood). Now checking the blood too often is not practical (and it is painful too).

So which other body fluid can be used? Well, the tears can also be used to analyze the Glucose level in the body at the given point of time. But collecting tears is also a very tough job. Scientists like Babak Parvis worked on the project to have some smart lens to do the job! In 2011 Microsoft also collaborated with him on the project of developing such smart lens. In fact they have published a video in the same year about the same.

The project didn’t found the success as desired (we come to the conclusion because we haven’t heard much about this ambitious project afterwards – if you got to know more about the same, do let us know via comments below). Babak Parvis is now working with – Google X – team; and Google team have decided to go for the project.

Google is known to work on the several project which are far away from its core business. Some of them are:

Google also keeps shutting down the projects which are not performing as per the expectations. 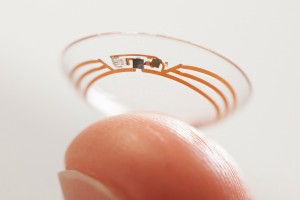 Google is currently working on the Smart Lens which is targeted to measure Glucose levels via the micro chip fitted inside the lens and update the same every second! Once the prototype is tested thoroughly there will be indicators to indicate the dangerous level of Glucose. Of course, the project will take time and there is a lot to be done in the same. But if all go as per the plan, this device will be (if cost effective) a positive aid for those who suffer with diabetes. And probably it will be able warn those who are not affected with it so far! It may also replace the painful way of testing blood to diagnose diabetes.

Let us hope for the best.