Posted by: Editor2 December 28, 2019 in Books, English Leave a comment

Ideally, justice and law are complementary things. Laws are made so justice can be served. In that aspect, we can say that – justice is the goal and laws the resources to enforce the goal is reached.

Things are not always ideal. We have seen in many cases that the laws are bent or interpreted in a way that they help the wrongdoers. Ultimately, laws and rules are to be interpreted, implemented and executed by humans. And, like everything else, there will always be a dark side of human beings too. Criminals and wrongdoers are not the species from the other planet, they are people like us, living amongst us and acts from within the society itself.

Possibly, that is why when the laws are bent a little bit or added with macho actions by the authorities, common-folks supports it. Be it in the films or reality, people wanted to see the justice being served. The latest example is the encounter of the rapists of a doctor in South India. People stand with the cops who executed the encounter.

Being a gateway to the virtual world explored with, the book cover plays a very important role in a remarkable number of book reading and/or purchase decisions. 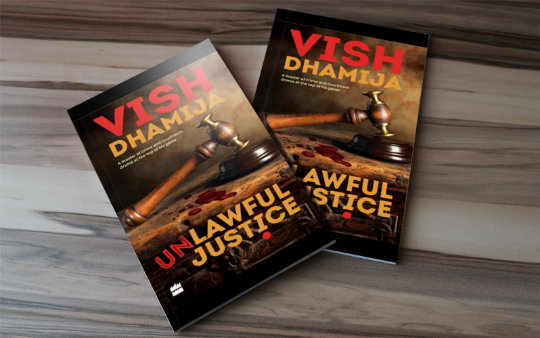 As the title suggests, a symbol of the judiciary system is expected on the book cover. A gavel (a judge’s hammer) is shown on the book cover with the blood spots on the table. It represents the entire story and book title in quite an effective manner. The shades of brown, red and yellow; make the cover page attractive, dark and decent at the same time.

Unlawful justice explores a fiction story in 243 pages segmented in 32 chapters. It is quite possible that some parts of the story shall remind you of many Hindi films (I want to skip the names to avoid spoilers).

There is a lawyer in a metro city whose practice is enviable. He doesn’t discriminate amongst the client as good or bad, as far as the money is flawed. His expertise has given him a really good reputation. And, the people (including those, who are on the wrong side of the law) are keen to get his services.

He has a beautiful and intelligent wife and a loving daughter. As the couple is having busy times, they have a house-help. A maid, which is no lesser than a family member for them.

There is a friend for the lawyer who is even more successful than him. He happened to be his classmate during studies. The lawyer, his wife, and his friend share a friendship that is true and dependable. They do not call each other daily, nor they socialize on regular bases, but they know that the other one will always be there when needed any assistance, no matter how tricky the situation will be.

There is a client of the protagonist who is on the wrong side of the law. His front is very genuine, though. He never allowed himself caught with anything illegal. And, that’s why his public image is of a clean and genuine fellow. He had tonnes of skeleton hidden in his cupboard, though. He has a son who is gone out of his wits due to the influence of his father. He thinks that he can do what he wants to.

And he did something terrible one fateful night. The wrongdoing affected the lives of all the characters we have mentioned.

What was the action? And, what were the reactions? How it affected the lives of the people associated and how the justice will be (if) served?

The book is a dark thriller and is for mature readers only. Like any crime fiction, this book has explored some violence, brutality, legal aspects and adulteries. We must say that the author remains in control of the story throughout. The research work he has done is remarkable. The way the landscapes are explored, the scenes are elaborated and emotions are talked about; gives a thrilling and satisfactory experience to the readers.

It is the sixth book by Vish Dhamija, and the author himself says that:

… Everything changes between the first and the sixth book. Like anything else, you’ve set an expectation for the readers. They start comparing your sixth book to the first five; they draw parallels with the works of other authors. The biggest change is they do not just evaluate your sixth bool, they evaluated you now.

He summarizes the tale beautifully in his own words (which also elaborates his vision behind the story):

Unlawful Justice brings forth the point that crimes aren’t sins and vice versa, and what we humans think is justice isn’t necessarily the final judgement in God’s eyes.

The book has many characters; Maheep, Ragini, Maninder Singh, Priti, Dr. Shah, Mr. Vansh Diwan, Mrs. Diwan, Baby, Gayatri, Akash Hingorani, ASP Kapoor, Dr. Mehta, Hardy Lohia, Judge Shilpa Singh, and others. It is not easy to keep track of these many characters and weave the incidents so convincingly that all of them are linked properly. The author does it like it is the play of his left hand. I found none of the characters out of sync or not given enough footage.

Vansh Diwan’s character has various shades. He has his strengths and vulnerabilities. His “practical” approach to life may not always be approved by the reader. Mrs. Diwan’s character is of an ideal lady of the house. She stands by the truth, no matter what. Their daughter inherits the characteristics of both of her parents and reflects the way the youth think and behave. The way she and her mother stands by the maid and her daughter will be approved by all readers.

Akash’s character is worth paying attention too. More importantly, the way the antagonist’s characters are also given proper footage. It is said that the hero is as stronger as the villain (if not more). And, if the villain is not capable enough, there are no heroics left to be done by the hero. Maheep’s character reflects the mindset of the spoilt wrongdoers in an effective manner.

I also like the way the author developed the characters without any gender prejudices. I found “strong-characters” always an important attribute in Vish Dhamija’s books.

Be it the mention of Lady Shri Ram College, Delhi; Mr. Diwan’s office, the antagonist’s farmhouse, the traffic and localities of Delhi, the home of Diwans, the courtroom scenes, the telephonic conversations or any other aspect, you will enjoy reading them all. And, most of the time you will get a feeling of watching a fantastic thriller movie (or TV show).

The author’s command over the language is known. The way he weaves the things in words is commendable. For example, here is a line, I like to read:

Legalities are put in place so that malicious people don’t take advantage of the sickly and the old. If even if your intentions are clear as sky, it is the paperwork that attests it.

It is very true, because, while the case is running, the evidence and paperwork are very important aspects to consider. That’s why preparing charge sheets require a significant amount of time and even more importantly, the choice of words and other linguistic attributes play a vital and important role in it. Sometimes, just a small slip in a sentence moves the case from one side to the other.

The author came up with some fantastic oneliners in this book as well.

Some of the advises given in the book are applicable to all the aspects of life, and, should be implemented.

… build as many bridges as you can when you have time and resources.

So, by now, you must have got an idea about linguistics and writing quality to expect in this book.

The pace of the book remains good throughout and I don’t find dull moments there. The end may look quite a filmy and surprising, but it remains true to the spirit of the book (and its title, too). The book is not just a courtroom drama but much more than that.

Overall, a nice thriller meant for adult readers. It explores police-procedural, politics, the world of crime, courts, and life-style in a metro city and its positive and negative aspects quite effectively.

Previous: With Ash on Their Faces By Cathy Otten | Book Review
Next: The Nameless Book: Everyone Has A Story By Deepthi Ayyagari | Book Review