Vish Dhamija is an excellent author. His vocabulary is so rich and his way of elaborating a scene is really fantastic. What I like the most about his writing is the way he infuses sarcasm and humor (not always dark).

Earlier I got a chance to read a thriller named Bhendi Bazaar from our team, and I have shared my unbiased review for the same at:

I don’t like abusive stuff and adultery in the book, and Bhendi Bazaar has a lot of that, but it has a lot of other stuff as well, which made is a nice crime thriller. So, I decided to read Vish’ latest work The Mogul, and I am happy that I took that decision :).

I always feel that the cover page plays a vital role in the purchase/reading decision we make. Of course, it is rightly said that “one shouldn’t judge a book by its cover” but, it is the human nature that we like attractive and tidy things (and that is why they are considered “attractive” :)). 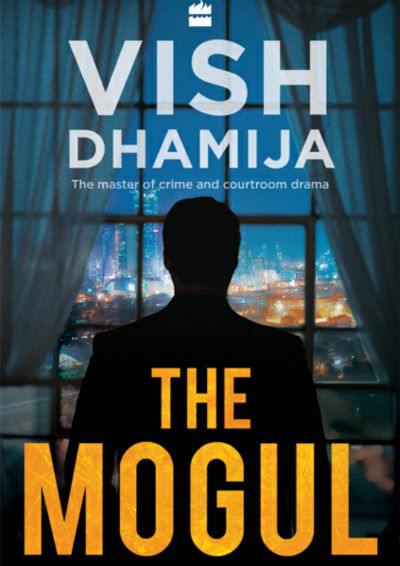 As you can see that the cover page of The Mogul is quite impressive. A wealthy and influential businessman looking out from the top of his mansion where the city seems to be smaller. It gives an impression of his influence on the area he is The Mogul of! The protagonist, however, is a middle-aged person in the story, and the representation here is of a young fellow.

Overall, a cover page which reflects the title of the book in an effective manner.

Prem Bedi heir of the Bedi empire worked hard day and night to keep the reputation of his ancestral business intact and live up to the expectations people had from him. Tej Malhotra is his legal advisor. But his loyal work for Prem since around a decade made him his best friend and confidante.

Prem’s personal life is not so good. He got divorced with Rea before many years, and she holds no place in Prem’s life anymore. In fact, Prem didn’t meet him in the years and she is almost non-existent for him.

One day (precisely, 9 Jun), when he was on a business tour in Korea, to finalize a business deal with Mr. Sung-min Lee, he got a couple of calls from India. It happened after his leisure time (when business happens along with pleasure) when he was with Mr. Lee at Nine Bridges Resort on Jeju Island, South Korea where he was enjoying his time playing Golf. Upon following the calls, he found that it was to inform him that his ex-wife is found dead! And, so does her current Husband Mahesh Desai!

Considering that he might be needed in case, especially as there are no immediate relatives of Rea are there, and he may need to perform her last rites, he goes to Seol to take a flight to India.

In India, the situation is getting tensed day by day as Manish Desai, the brother of Mahesh Desai openly accuses Prem with the murders. Prem has to defend himself. Rather than going for a battery of lawyers from any well-known advocate firm, he decided to hire Rohan Malhotra, the son of Tej Malhotra to defend him in the court!

Will inexperienced Rohan be able to defend Prem? Was it prove Prem’s worst decision? Well, you need to read the book get the answers, and most importantly to know who committed the murder(s).

We (all the members of our writing team) strongly suggest the readers to not to miss the preface, forewords, prologue, epilogue, glossary and whatever other sections are included in the books. I know many of the readers who have a habit of just jumping to the main story. It is like eating the main course when you are eating out. From starters to dessert everything has a specific experience for you (of course, your budget plays a role there). In a book, when everything is available as the part of the package, missing any segment will be like missing a piece of the story.

The author’s notes at the beginning of the book, however, should be read with a consent. Actually, Vish Dhamija himself asks you (the reader) to do so. And, there is a reason. He refers that the story was in his mind since long and it took him time to get it penned and published. He then mentions the case of Dr. Abirami Chdambaram of Alaska State Scientific Crime Detection Laboratory in Anchorage… You can run a search query in any popular search engine to know more about it, but, I will suggest you do it after you complete reading the book.

I would consider this book as a Legal Thriller specifically. Of course, it is a murder mystery and there are many things happening throughout, but it all revolves around the legal aspects of a case (or cases) and thus it will remind you of reading a John Grisham book.

The story seems fresh (despite the time it took to get published as said earlier), and most of the readers will find it so. The author is good at building characters. During the course of the story, we meet Prem Bedi, Tej Malhotra, Rohan, Urvee, Pia, Sheila, Rea, Mahesh Desai, Manish Desai, ACP Ranjeet Dutta, Gajpati Apte, Veena, Mr. Sung-min Lee, Huan (the translator for Mr. Lee), Dr. D’Souza, DCP (not naming him here), Sonya, Arti, Freddy Vakil among other. Even the butler of Bedi house is named and explored a few of his characteristics, it will be enough to know the detailed characterization of the book.

The book explores that no one is black or white. Each of the characters has his/her shades of grey. But surely some of them are whiter than the others and vice versa. While we have an ACP who is genuinely doing his duty, there is a DCP who has his own preferences. So the author tried balancing the things and showing both the sides of the coin.

The book has its dosage of adulteries and cuss words, but it is comparatively smaller. And, it portrays a couple of characters, especially some of their characteristics, in the book, it seems necessary. However, it requires the reader’s consent for sure. So, read it accordingly.

The author captures the business tactics, especially what happens when cracking/negotiating a deal, in an interesting manner.

Neither man needed to negotiate: yielding a slightly higher percentage wouldn’t have bankrupted either, but the power play was about egos.

I found this line interesting as well.

A lion hunts not only for itself; it has to provide for all the other animals too, after its own hunger is sated.

The book has the dose of sarcasm. For example:

Bureaucracy is funny until you see just how comical politics can get.
— — —
So in all those years have you ever come across a “not exactly” that translated to a “yes”?
— — —
‘So when and where did the two meet?’
‘You mean Rea and M Bedi?’
‘no, Santa Claus and Mandrake, the magician. Of course, Mrs Rea Desai and Mr Bedi; who else would I be interested in at this moment?’
— — —
I could have run a University course on how to burn money in milliseconds. But it was all for the greater good – spend today, inherit tomorrow.
— — —
I want to tell them, obviously, only your friends could deceive you; your enemies would declare an open war.
— — —
Do not come between the lion and his pride, unless you want to end up as mean on the barbecue.

Here are some of the punchlines, I liked in the book:

I hadn’t missed the writing on the wall, I had missed the entire damn wall.
— — —
… if you told a lie often enough, it did not become the truth but it appeared to be the truth. And that’s all that was required. People believed in appearances.
— — —
…no doctor can help a patient who does not want to recover.
— — —
Bad news always found equally vile partners.
— — —
A defeated opponent should never be taken lightly: an aggrieved animal is always twice as dangerous.
— — —

The author is good at exploring emotions also:

Rohan had done me proud last night. He had beaten my expectations in many ways. as it is so often happen to all fathers, I had always imagined him as my little boy,…

The characters and their attributes are described in an interesting manner:

Bald by choice, tall and gangly, he was fifty, a bachelor and smoked like a steam engine.

The dilemma of a character when he was caught in the tricky situation reminded me a famous scene of Hindi Film “Meri Jung” where the female lead tells the male protagonist something which means “those who don’t have evidence not necessarily has been guilty, always”.

The problem was I couldn’t prove a negative. If someone said they could drive when they actually couldn’t, it would be simple to prove them wrong. But if someone…

The high morals and ethics or a character are explored through small yet effective lines like:

Tej, if you aren’t caught stealing, it does not mean you never stole.

And, to remain true to the genre, there are some “sarcastic yet related to the profession of a lawyer” lines in the book:

Advocate rule 101: never ever ask a question in the courtroom you don’t already know the answer to. You didn’t argue a case in court to discover things. You discovered things and then took them to the courtroom.

My vision behind sharing some of the lines from the book to show you the way the content of the book is crafted. So, you can check for yourself and if you find it interesting you can go for it.

The other thing I like about Vish Dhamija’s book is he tries to explain interesting facts about some important places we visit in his books. It gives us knowledge update.

I enjoyed the thriller and found it remains true to its genre. The twist in the tale is something you will enjoy. Maybe, a few enthusiastic readers could guess it right.

If you love thrillers and crime fictions, this book is for you. Though it is a legal thriller it tries to explore the psyche of various characters quite interestingly. A little bit of adult content is there.

Previous: Finding The Magic in You by Shivam | Book Reviews
Next: The Lethal White by Robert Galbraith | Book Review