With Ash on Their Faces By Cathy Otten | Book Review

When we see unrest in various parts of the world we may often ask a question to ourselves: “Are we really progressing?”

Reading With Ash on Their Faces: Yezidi Women and the Islamic State By Cathy Otten (a journalist) is an emotional experience. We are thankful to Fingerprint! Publishing for providing us the review copy of the book. The review is unbiased and uninfluenced, as always.

Let us take a look at the cover page of With Ash on Their Faces.

Being a gateway to the virtual world explored within, a cover page holds the power to influence many purchase and/or reading decisions. 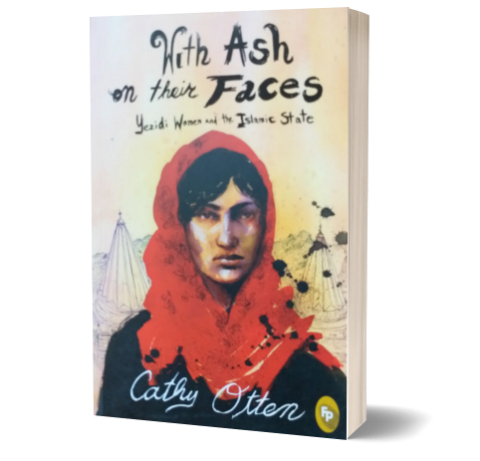 With Ash on Their Faces: Yezidi Women and the Islamic State By Cathy Otten | Book Cover

The book is about the dark side of humanity faced by Kurdish people, especially the Yezidi women. The title of the book reflects is quite well. So, the challenge for the cover page designer was to represent them in the most effective way. Of course, there are no cheerful colors used, nor expected on the cover page. The color and font face for the title creates an impression of something written by using a lump of burnt coal (or ashes from the same). The illustration of a Yezidi woman multiplies the effect.

Usually, we talk about the story and our views in two distinguished sections when reviewing a book. The nature of this book is quite different, so we are merging both the segments here.

Reading this book has reminded me of a book named The Doodler of Dimashq by Kirthi Jayakumar. It also reminded me of a story named “Kurdistan Ya Maut” (translated in Gujarati) which I read at least more than 20 years ago in a supplement of a Gujarati Newspaper.

This book is a collection of tales (or shall we say reported incidents) of Yezidi women and their relatives who suffered brutalities from ISIS. The political changes and religious extremism are the core reasons for these atrocities. The book is not for everyone. If you are an emotional reader, surely you will feel sorry and sad about the women referred to in the book. We need to remember that these are only reported incidents which the author came to know about, but, there shall be many more such incidents that didn’t catch anyone’s attention yet! And, that thought shall Shackle the conscience of a reader.

The author has taken care to change character names in many places, for the safety and security of the victims. Revealing identities will multifold their suffering, as after being exposed, they will come to the radar of the tormenters again and the society also will not find it easy to accept them!

I wanted to skip as many spoilers as possible, but, some of them are unavoidable. Let me mention a specific incident where the people of a village are confined and locked in a building. The parents of a girl force her to have sex in the bathroom with a fellow Kurd, as they don’t want the dignity of their daughter to be vandalized by a brutal fellow (or some fellows – as gangrape of the victim is quite common)! Just imagine the lives of those captives who somehow ran away from the prison then. What will be their place in society?

Also, the way the terrorist plan capturing villages, helmets, and cities in a well-planned manner that no one gets a chance to run away. The book also reveals the fact that whatever we say, people are still captured and enslaved for a small amount of money in various parts of the world.

We may find it tough to imagine the tortures and brutalities the captives need to face, by sitting in our comfortable holmes/offices. Life is not so comfortable for everyone.

The book also explores some customs in the Kurd people. The way a boy and a girl can choose their spouse and how they finally are got married to each other. We consider 14 (years) as the age of studying, but you see many girls from those places get married at that age! The case of a 14-year girl fall in love and getting married to her lover, actually doesn’t know the meaning of love, will shake you. The situation gets even more tragic when within a few years she will be busy making food for around 40 family members and soon her daughter becomes 11. The silver lining in the story, her husband, was on duty to protect the land. And, when their village was attacked, both of them were disconnected :(. What fate has for them in its pregnant belly?!

The initial segment of the book holds a glossary where you came to know about various political parties and other groups function there. The author’s notes and introductory chapters are long but must be read before jumping on the actual content of the book.

The author, being a reporter who has worked in the field and did real ground-reporting in many cases, doesn’t shy away in mentioning the name of the terrorist organizations and their ranks, along with the places which are harmed.

Writing a book on such a sensitive topic is never an easy job. And the research work requires a lot of time and resources. The author must be appreciated for her courageous work.

Most of the part of the book is written more like news reporting rather than like a story. And, thus the book became like a documentary. In some of the chapters, the story starts taking a shape and then all of a sudden something else took its place. Not all readers will find this a good reading experience.

The geographical and political detailing of the land and the people living there with minute detailing makes the book preservable.

Here are some lines from the book that I would like to quote:

The detailed list of references in the “Author’s Notes” segment is one of the other positive aspects of the book.

Of course, the story is not just a story, it is an exploration of reality which one shouldn’t run away from. And, that is why, despite its flaws, the book should have been read. It must be read for the people facing the brutalities and remain stronger even in unimaginable circumstances, just depending on a tiny thread of HOPE. The book is about conquering odds and never let the fighting spirits die.

The book is not for everyone. It is for mature readers who can read with an open mind and willing to explore the actual wrongdoings happening in the world we live in.

I hope you have enjoyed the Q/A session with her. And many of your questions might be already answered. Let us know that what do you think about this Interview session? Do you want us to ask anything else to heron your behalf? Do let us know. Also, let us know which other authors you like us to interview? Do let us know your thoughts and remarks via comments below. Do not forget to share this article with your friends over various social networks via Twitter, Facebook and others. And yes, you may like to subscribe to our RSS feeds and follow us on various Social networks to get latest updates for the site to land right in your mailbox.