Home / Books / Nothing Else Matters by Vish Dhamija | Book Review

It is not the first book where the protagonist is a sniper. Of course, there are many movies and books already available with this theme. Nothing Else Matters by Vish Dhamija falls in the same category, which I found, has some unique attributes to offer. If you love reading crime thrillers and police procedural, you must have heard Vish Dhamija‘s name or maybe got a chance to read some of his books, or you might be his fan also.

I found this book at a very competitive rate during a book promotion and bought it. As, we, at ThinkerViews have already read a few of his books and also had a chance to have an author interview with him, links given below, we knew that purchasing his book won’t be a regretful decision. And, when I finally read the book, I was happy for not being false in judgment.

Of course, we must not judge a book from ts cover. But, no one can deny the impact of the first impression. The cover page of a book is thus very important to consider, as it leads to many book purchase and/or read decisions. 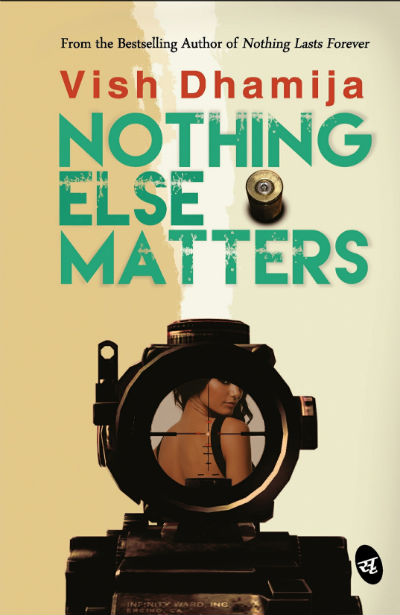 Nothing Else Matters by Vish Dhamija | Book Cover

As you can see the cover page of the book has an “old book” look. A lady seen from the telescope of a sniper rifle, below the title of the book. When you read the story within, you will be able to connect these elements to the book. And it, thus, is 100% faithful to the story. The use of yellow shades for the background and green for the title looks a little dull. The cover page could have been more impactful if used a better color combination instead.

The book explores the (fictional) story of an assassin – Heera. A nickname given to him by his recruiter by considering him as one of his gems – as Heera means Diamond. Baba Jee, is the man who recruited him into his gang. And, he hadn’t seen Baba Jee since then. But he knew that, whatever is shown in the films, entry to the underworld is always a one-way journey. You cannot come back to society to live a normal life. You remain always under observation (at least in Baba Jee’s case) and if you are found moving even a slight from the line, not only others are waiting to take your place, but are ordered to kill you too!

Had he always been wanted to become a sharp-shooter? Does his root link to the underworld since his early age?

Well, that is something for the reader to explore by reading the book.

It all starts when he is on a mission. He was given his target, time and place where and when need to fire to kill. And, he had recced the place to perfection. Everything was going as per the plan. And, his target had shown up quite on time. He took his aim and he was about to fire when he had seen someone along with his target!

Who was she? And, why her appearance matter, if it does? Or “Nothing else matters” to him then completing his job and slip away, as he is doing since years!

The entire book is narrated in the first person. It gives the book a feel of authenticity. When you hear the story from one of the characters of the same, it creates a positive impact about the book.

As mentioned earlier, the protagonist (or the antagonist) is a sniper who talks about his profession(!) in a manner like a doctor, an engineer or an accountant talk about his/her profession. It really leads to an interesting reading experience. The initial chapters of the book explore a lot of information about snipers and their lives. Especially, those who are working on the wrong side of the law.

The book is distributed (unequally) into three segments.

These three threads are independent yet weaved and moves ahead the story in an almost linear manner where the events from the past are explored through flashbacks. Many readers will consider this story as a crime thriller, which it is, of course; however, I see it as an intense love story where fate plays an important role and changes the plan.

A middle class couple, trying hard to meet the ends, selflessly does their best so their children can go to the best school they can afford and get the best education they can provide. Their two sons have almost opposite persona and had seen their parents struggle throughout life. What you expect them to do when they reach their peak of the youth? Well, the answer is expected, but life is not a well-written script. There are so many internal and external factors that can play their crucial role to change the narrative. These things are explored in the book very convincingly.

The characters are developed slowly and steadily. The biggest success of the author, according to me, is the way he is able to emotionally attach the reader to the characters. At places, things will remind you watching some filmy drama. But, then, it is often said that the truth is stranger than the fiction (and this is a work of fiction).

I like the pace of the book. It doesn’t lose the grip and remains steady throughout.

Vish Dhamija has a good habit to explore the relevant historical information about the place while exploring the scene. It makes the book a crispy read. Here is an example:

The Gateway of India is also called the Taj Mahal of Mumbai through its construction was much later than Shah Jahan’s mausoleum, and it was made for an altogether different purpose. This magnificent structure wasn’t built for a loved one; the British built it in 1911 to commemorate the landing of the King and Queen of England – who only saw a cardboard structure on their arrival as the real structure wasn’t ready until 1924. The most significant event t the Gateway of India was that the last of the British troops passed through this gateway, signalling the birth of independent India. …

The protagonist got an interesting line explaining the vunerable side of his profession.

Unlike most other professions, in my job you win and escape or you die. You don’t need an Einstein to tell you that most killers don’t carry a ration card in their back pockets.

You will also notice the sequences where the protagonist changes his SIM card frequently and uses different ones to talk to different fellows including his handler. I also like the exploration of college days and middle class family environment.

The following lines are quite poetic yet realistic.

Love and War …. I prefer to ignore all other and believe that the greatest similarity between the two is; it might be in your powers to being either but once you’re in, you have no control on how much havoc either would make.
And you have absolutely no power to end either of them.

There are some interesting lines in the book which spread wisdom and life lessons. Here are some of them:

Here are some lines where the protagonist talk about his profession in matter of factly manner and yet giving some important information about his habits too.

I have a detachable bipod – it’s like your camera tripod, but it’s a leg short. And, thanks to Mr. Steve Jobs for giving the world iPods; no one even gives me a second look when I sport my big noise cancelling over-the-ears headphones to keep any kind of noise and distraction away when I fire that crucial shot.
— — — — — — — — — —
I wear gloves al the time. I only take them off when I eat, as I don’t want my food to be contaminated by cordite.

You need to be an avid reader to be a good author. And, those who explore the crime-thriller genre must have gone through the works of Agatha Christie, Arthur Conan Doyle, and others. Vish refers the famous fictional detective Hercule Poirot at one place in the book:

From my school days, I know some poisons work immediately, but all poison isn’t cyanide. Some could be administered to kill hours later, like the ones Poirot always ferreted out in Agatha Christie mystery novels.

Here are a few other lines in the book:

Deshpande’s reciting the section number or criminal code made as much sense to Luv as exhibiting a Picasso to a blind dog.
— — — — — — — — — —
Her brain had a delayed reaction to an action she had passively permitted in a way, the ramifications of which were irreversible.

These lines must have given you an idea about the quality of writing and the research work the author has done for this book. There are some more such segments I wanted to include, but, had to resist myself to keep the spoilers at the bay.

The author has used words like “introverted” where he could have used better alternatives. But, overall the book is good at linguistics. The current generation might find some stuff less interesting.

Overall, a small, filmy thriller which you will surely enjoy reading.