Posted by: Editor2 August 8, 2018 in Books, English Leave a comment

Writing a crime thriller is a tough job and when it comes to investigating a case one needs to be very attentive to details and has to be realistic in exploring the things. So, I was curious to know how Vish shapes his stories and got so much popularity in his reader zone.

Let us take a look at the cover page of the book first. 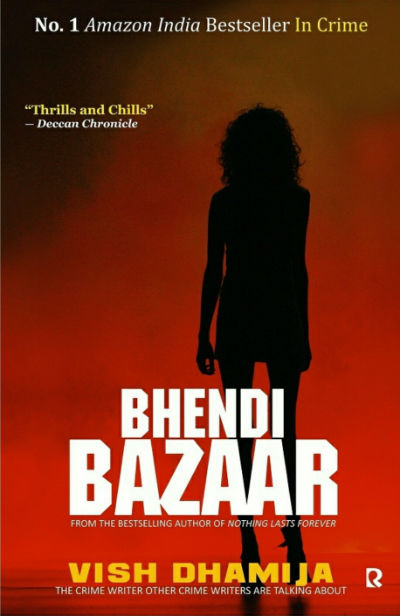 The book refers to a known red-light area (where prostitution is done) in Mumbai. So having dark red background reflects the environment or the setup there quite effectively. It is rare to find someone who is doing prostitution by consent. Most of them have their own reasons for falling into it. A girl’s illustration (yes, a girl, not a woman) in black color is a metaphor of such trapped souls. The cover page reflects the book content effectively.

The life of investigating officers from Police department is not easy anywhere around the world. Especially for those who perform their duty with honesty and remaining true to it. The working hours for them are never fixed. They are almost always on the duty. People when blame for their incompetency often forget the fact that they are all human beings like us. And yes, there are corrupt people in this department too, like in any other department, who are responsible for the wrong impression of the department. One, however needs to understand that all individuals are not same.

Anyway, let us focus on the story, which starts with a fantastic exploration of Mumbai city and a little bit of its history. The way the area got its name Bhendi Bazaar prove an interesting read for those who are not aware of it.

It is said the city of Mumbai never sleeps, and it doesn’t let sleep peacefully its honest and duty bound officials also! DCP Rita got a call about a murder in the city and she had to get ready to reach the crime scene!

Before many years, when a country has iron-clad its inside happening, and people started getting frustrated of living like they are in custody, a few girls decided to get out from there, for the better future. They wanted to go to some developed country where freedom of a person is respected and a life can be lived. They got a chance to get out of the country as they are athletes who got a chance to perform internationally (representing their nation). They tried finding some illegal way to remain outside of the country once the games are over, and eventually, fly to their dream destination from there. They trusted few unknown people for the purpose!

After the games are over, the things went as per their plan. They got separated (as they’ve planned) from their team and met the contact. And, then they were taken to a place for their over night stay after which they can board a flight to their destination. So everything is going according to the plan, right? Well, so far, yes. But the things took some unexpected turns and the girls are trapped in something they hadn’t ever thought about!

There happens to be another murder in Mumbai, with almost similar modus operandi. And the press was on their toes. The police officers need to investigate and resolve the murders at their earliest. The things are getting more and more complicated for Rita and her team.

Well, but aren’t we referring two different stories? Actually, there are to links of the same chain. Who is doing the murders and why? This question can be answered only by reading the book.

The book is a fantastic thriller and there are no two thoughts about the same.

If I’ve read just first 5 chapters I could have given 10 out of 10 stars to the book for almost every aspect of the same. But then the book falls into adult arena. No doubt, it explores the dark world of the prostitution and some adult content is unavoidable. But the goes into too much details. At least, as per my opinion. And, there comes places where it look like soft porn. The stuff however explores the brutality in the world of prostitutes, especially who are deceived and forcefully brought to the field. Some brutal stuff mentioned could be realistic (as truth is often stranger than the fiction), but it makes the book strictly for adults. It is more or less like watching a James Bond movie. As per my opinion the author could have given an impactufl thriller evenwithout getting into too much adult zone for sure.

The characters are strong and they grow up gradually and stands upto the expectations they have created in the reader’s mind on first impression. If we ignore the adultery segment, the book has all the ingredients of a thriller. Rita’s character is a nice example of an empowered woman. When you have abilities, your gender is just an attribute and nothing more. The way author adds some mysterious characters makes you believe that this person may be a culprit or the one who is pulling strings, adds thrilling moments to the book and the suspense.

While it could have been easy to mess the things up for the author, as in prologue some key incidents are mentioned, the author remains in full control and despite the readers knowing that the incident mentioned there has an impact on the story and where the suspense could be leading, the author is able to keep the reader at toes till the end.

Vish Dhamija, the author, is good at explaining scenes, exploring the historical details and elaborating characters and more importantly building a suspense and pen down thrilling incident. The way he add interesting lines in the story will amaze readers for sure. Here are some of them:

They – the alleged experts – had been wrong all along; a leopard could change its spots, after all.
—- —-
Don’t let routine throttle your intelligence, don’t let logic overpower creativity. —- —-
Sometimes when we get too close, we can lose focus, just like a camera.
—- —-
Lone wolves were acknowledge to be the most dangerous.
—- —-
Hope isn’t a strategy or an answer.
—- —-
Time is the greatest mathematician, they say.

Here are some line which provide good psychoanalysis of human brain and can be used for motivation purpose also:

…suicide mean accepting defeat, when your life feats you.
—- —-
Perplexity is like quicksand; the more you struggle, the more you sink.
—- —-
The human mind had a wider spectrum than an ocean: the feelings, the emotions, the fears, the reasoning, and sometimes, the aberrations that misguided the perplexed mind.
—- —-
Truth shouldn’t need consulting the brain; it should just spill out.
Think like you’ve never thought before to come up with an answer you cannot imagine or cannot believe.
—- —-
Never disregard your first impressions; it’s nature’s way of telling you something.
The butcher doesn’t need to be a genius, he just has to be smarter than the lamb to survive.
—- —-
Things doesn’t make sense only when you do not have the complete picture or the other person’s perspective. Everything else should make sense.

The realistic analysis of how the things are actually happening along with the punch of sarcasm is found in lines like:

Didn’t the sinking of the Titanic sell more paper than its sailing?
—- —-
The law might work on evidence, but a judge was always impressionable.
—- —-
Lack of sufficient info always gave birth to more possibilities than required.
—- —-
Little thieves are hanged, but great ones escapte had become an overused expression in uniformed police circles.
—- —-
But even a mug could be an Einstein with the benefit of hindsight.
—- —-
The servility of Indian bureaucracy stopped everyone from quizzing.
—- —-
Someone carried a gun. You were dead if you argued with a gun; you died if you didn’t argue with a gun.

Here are some effectively expressed emotions/scenes/facts from the book:

Like an dolescene who cannot decide if she’s is a girl or a woman, the third hour after midnight – most people would concur – cannot decide it it’s night or day.
—- —-
The telephone in the operations room was screaming like a neglected child that needed coddling when Rita returned.
—- —-
It was still. Still like the air, in some yogic stand, has held its breath.
—- —-
Getting back to sleep, though desirable, was difficult.

The pace of the book remains gripping almost throughout the book, and so does thrills.

The way the characters of police officers explored is good. It portrays them as normal humans with their own abilities and limitations, like all of us. The author goes ahead and explored the behind the scenes of the news channels and media also, in quite effective manner. Of course, not everyone is corrupt in any zoner. There are some genuine fellows, who make people believe in the system so far. And, the author tries effectively to balance the things in that way.

A gripping thrillers exploring the dark side(s) of the society and how it ruins the lives of innocent people without their faults. Strictly for adults.

Previous: Safari Magazine | Gujarati Edition | August 2018 Issue | Views And Reviews
Next: 102 Not Out | A Comedy Family Film Which Passes On A Strong Message | Movie Reviews