Mahabharta has something within it which makes people revisit it again and again from the same or different perspective. No doubt, it is the greatest and longest epic available in the world since ages.

The telling and retellings have made so many versions of the tale that it may count in 100s or probably thousands and we may not know the exact figure. Not only that it is retold many times by different people, but it is also available in many languages and more importantly in various dialects. So, it is quite possible that some of the versions are not available in written form also.

It would not be wrong to say that a writer or an author familiar with Ancient Indian (that is Bharatiya) literature dream of writing his own version of Mahabharata one day. And, the beauty of the land is, you are allowed to rewrite it from any perspective. Be it Jaya: An Illustrated Retelling of Mahabharata or Ajaya: Duryodhana’s Mahabharata; two completely opposite perspective.

Popular author Ashok Kumar Banker also came with his own retelling of Mahabharata. He has done something different by writing a series of short Ebooks under the hood “Epic Love Stories”. While Mahabharata is the story of the war for many of the readers, actually it has a number of love stories explored within. Here are the books in this series we have reviewed so far:

So far, there are 5 books published in this series, and today we are going to talk about the last book in this series – Amba and BhishmaA Love Story That Was Never Meant To Be). It is worth to note that as per the sequence (of stories) this is the 4th book in the series.

How many times a book cover has tempted you to purchase or read a book? Or the opposite happened (you left the book or didn’t feel to go for the book) by seeing the cover of the same? More often than not, right? The cover page plays a significant role in the selling of the book, without a doubt. 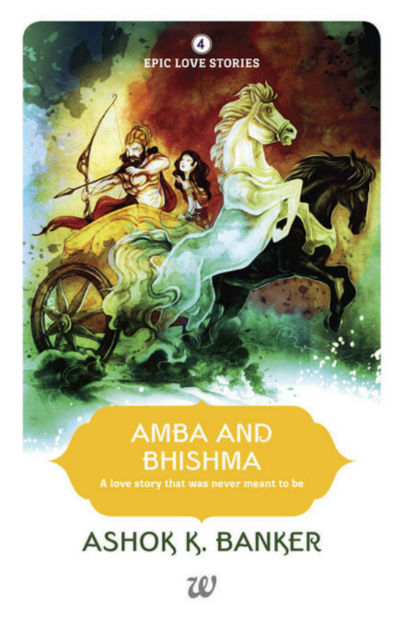 As you can see, the cover page of this book has an illustration of Bhishma fighting ferociously using his bow and arrows and is in a protective stance for Amba who is standing near him. Of course, when you think of Bhishma and Amba, a few scenes come to your memory; Bhishma entering in Kashi court and overpower all other attendees to take Amba with him, Bhishma is coming with Ganga to Hastinapur and en route he was attacked by Shalva and others whom he overpowered and took Amba to Hastinapur safely; and a few more.

The journey with Bhishma en route to Hastinapur from Kashi was the largest time Amba was in his company. It was that time when she got to know more about Bhishma and his qualities. So the perfect scene was chosen for the cover page. Also, both the horses of the chariot are of opposite colors, maybe reflecting the prime characters’ persona. The illustration could have been better though. Overall a moderately good cover page.

The story is almost known to everyone.

As per the tradition, Kashiraj arranged “swayamvara” for all three of his daughters: Amba, Ambika, and Ambalika. It was a grand affair and potential groom-to-be (who will be) chosen by these three young and beautiful princesses. Everything was going on as expected until a faitful moment (which was predicted by wise men earlier) when Bhishma entered the court and announced himself as the representative of Hastinapur king Vichitravirya.

Slowly, the voices of resistance grew in the court against the presence of Bhishma as everyone knew that, if he wishes Bhishma can overpower each of them and abduct the princess(es) he wants. But, together they were reluctant to try their luck and in any way they are not in their own kingdoms, so the damage is to be done at Kashi. Their own people and kingdoms were safe.

The challenge was overpowered and Bhishma took all three of them in the chariot with him and started immediately for Hastinapur.

En route to Hastinapur, he knew that he will be attacked by a group of these kings and their armies. He thought tactically and practically. He wanted to reach a place where he could have a strategic advantage. He knew that he had to take care of the three brides as well. And, the strength of the chariot horses is also limited. He was, however, very sure that the attacker will not take a risk to harm these brides.

Was he true in this assumption? Or was he not? Was he able to bring them all safely to Hastinapur? Will he come to know that one of the princesses – Amba, was actually in love with Shalva? And, if a girl loves someone from her heart, Bhishma, the man of principles, will not force her to marry king Vichitravirya. Will he? And, where did the undestined and unthought love story of Bhishma and Amba will start (if it will, ever)?

Writing a short EBook and that too based on a segment of the popular epic like Mahabharata is not an easy task. The main reason, of course, is the story is known to everyone. And, yes, you are entitled to infuse your creativity within, but at the same time, you need to remain true to the original content, as much as possible. It is kind of walking on a tightrope and the author does it quite well.

The story has some really hard-hitting lines. For example, take a look at the following dialog which refers to the custom of Swayamvara (the ceremony to choose the groom by the bride).

If you really wish to have pride and dignity, you would not have a swayamvara at all. You would simply choose your man and marry him. That is true freedom of choice.

Swayamvara – is always represented as the liberal thing which gives a woman to choose her life partner. But, then the woman’s point of view is quite logical. What do you think is the better choice?

“Why should a man only best at arms to be a suitable husband? Can he not simply be a good man? A loving, caring, sensitive, educated, intelligent man?”
He was describing Vichitravirya although she did not know it.

And yes, there are some sarcastic lines with a matter-of-fact tone.

“There is much you do not know about the world, princess Amba,” he said. “And I am one of those things.”

The chase and war scenes are good and the emotions during those rush-hour moments are explored very interestingly.

… At least for now, the desire to prove themselves superior warriors was still outweighed by their desire to gain wives It was when the balance shifted to the former desire that the real fighting would commence.

It is said that the true quality of a person can be seen in the way he treats those who are not superior to him. See the way Bhishma thinks about he horses in his chariot.

He only desired that his horses escape unhurt. They were most innocent of all in this conflict and did not deserve to be injured or killed.

A true human will care for everyone. Not only himself, his own family or his own countrymen. Everyone includes animals too. The real quality of one is into acknowledging the quality of other species too. And, it is rightly said:

… Animals? They are born loyal. Dying for one another is part of life for them.

The way one is grown-up, is reflected in his/her behavior. The author understood this human psyche pretty well. The author has referred it in one of the scenes through Amba’s behavior.

She was a princess born and raised, she could not overlook protocol and etiquette, even under the circumstances.

These quotes from the book must have given you a fair idea of the content quality of the book. The war and chase scenes are definitely a treat to read, so does the way Bhishma behaves during the fight and afterwards. The night scene at the bank of a river is not to be missed.

Love, as it is said, is really a pious feeling. Material stuff doesn’t matter much where true love is there. In most of the cases, based on the psychological levels of the people in love, of course, what the most matter are the attributes or characteristics of the other person. The book, thus, focuses more on exploring attributes of the characters and author is successful in his aim.

The book has some errors too. Of course, I am not referring to incidents or its course, as the author is entitled to do it as per his vision. The protagonist is refered as “Bhishma Pitama” at various places (Location 7%, 14%, …). The author could have taken care of such small things.

I enjoyed reading this short Ebook. And, as I bought it during a promotion, its value for money for me. I will suggest you to watch out for a good deal (which we keep sharing at our social media handles) and buy it at competitive rates. If you love Mahabharata or mythology retelling, you will surely enjoy reading it.