Posted by: Editor October 24, 2019 in Books, English Leave a comment

As the world has changed around us, the stories we tell reflect that different world. There are more and more voices airing how the lives of people in various corners of India are also changing with new opportunities and still to some extent appear unchanged at the fundamental level of beliefs. The popular, mainstream writers have managed to capture the voice of young India and how they are shaping up their world around them.

One such writer is Preeti Shenoy. She has a list of best-sellers to her credit, not to mention a huge fan base and she also delivers inspirational talks and sessions on creative writing. We have been exploring her work and recently, we came across her book called The Rule Breakers featuring the life of a young woman through the nineties as she finds herself and her place in life.

I liked reading this book and so on behalf of Team Thinkerviews, here are my thoughts and views on it.

We read this book on Kindle. As you know, when you are browsing through digital titles looking for that next read, an eye-catching cover page goes a long way towards making the decision whether you buy the book or not :), maybe add it to the wishlist and grab a bargain at later date… 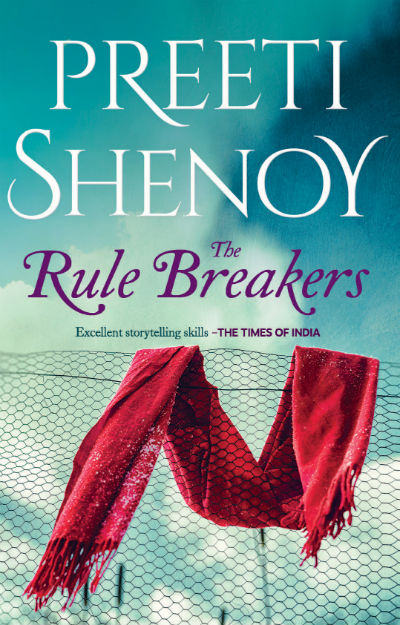 The cover page of this book has a very pleasant colour scheme. The red dupatta stuck on a fence, and still waving in a breeze is a great symbol for story of a young girl whose ambitions and dreams are suppressed by her family. And still, it has a message of hope. The cover page does a good job of attracting the browser while remaining true to the message inside the book.

The book is divided into four parts.

Part One: The Rules

We meet Veda, who lives in the idyllic hill town of Joshimath near Badrinath, with her parents, younger sisters Vidya, Vandana and Vaishali and youngest of all, her brother Animesh. Veda is a sweet, obedient girl, who likes studying and dreams of going to university in a big city and some day be a teacher in her small town. When she meets Suraj in her college, she accepts his offer of friendship. But, her parents have a different idea. Being the father of four girls, her father is keen for her to get married into a good family. Before Veda can do more than protest feebly, she meets Bhuvan and is married to him within a matter of months. She has to leave her home and her unfinished studies to start a married life with Bhuvan in Pune.

Part Two: Playing By the Rules

Bhuvan and his father are nice enough, but it is her mother-in-law who rules the house. Soon, Veda discovers that although she goes to college, she hardly has any time to study at home. Bhuvan has no romantic interest in her and her father-in-law lives in his own world. Veda’s only companions are letters from her sister Vidya. Vidya also smuggles letters from Suraj under her name, so Veda’s mother-in-law aka MIL does not suspect them. Things go rapidly downhill when Veda’s father-in-law dies of sudden heart failure. Veda’s MIL accuses her of bringing bad luck to them and starts actively abusing her. For the first time in her life, Veda fails in her exams.

At this lowest point, she meets Kanika – a neighbor and a childhood friend of Bhuvan’s. Kanika left her corporate job and now works for an NGO called Sankalp. They run a school for underprivileged children.

With Kanika and Bhuvan’s help, Veda gets permission to volunteer at Sankalp. She enjoys working with these children and soon Sankalp and her students – Kajol, Sanju and all others captivate her full attention as she sees their life in the slums and witnesses what they put up with on daily basis. They are joined by Ron from the UK, who also stays over as a teacher. Kanika, Veda, and Ron work really hard to ensure Kajol, Sanju and the rest of the class pass their year 10 exam.

Things have improved a little bit home for Veda, as the MIL is happy she has a full-time house help in the form of a cook and a maid. Veda also meets Suraj once and eventually realizes that she has romantic feelings for him. Bhuvan is still as distant as he has been since the day of their marriage.

So, Sankalp is essentially her life, but that is about to change. Sanju who has exam phobia tries to hook up with the thugs who run the racket of leaking the exam papers. As he has nowhere near-enough money, they thrash him badly. Ron, Kanika, and Veda find him, but it is too late. Sanju dies in the hospital.

As her life seems to spin out of control – Veda tries to get over the grief of Sanju’s death by throwing herself in work for the rest of the students. But Sanju’s parents and the rest of the slum dwellers accuse Sankalp for Sanju’s death and stop sending children to the school. Veda, Kanika and Ron are facing an investigation at work.

On a personal front, Veda finds out that Bhuvan is in love with someone else.

As we are introduced to the story, the quote below says it all:

Rules and Responsibilities; these are the ties that bind us. We do what we do, because of who we are. If we did otherwise, we would not be ourselves.

This is such an ingrained doctrine during the upbringing of children in India, where we all know our place and learn very quickly on what is expected of us. It builds the premise of the book very effectively. And although the first para about the world being populated with rule-followers and rule-breakers reminded me of the famous dialogue of the film “Bunty Aur Bubbly” about how this world has two types of people – those who follow the rules and those who break them – it does a good job of letting us in these world of a small town India in 1995.

I enjoyed the book – both for the characters and the narrative. Most of the story is told through the letters – written by Veda to Vidya and Suraj and their replies. This was still the time when letters and diaries were probably the only places where young women could express themselves freely. As we learn about inner workings of obedient, rule-following Veda and courageous, bold and rule-breaking Vidya, our heart breaks a little for both as we sympathise with them. While Veda is favourite with her parents for following the rules, she ends up suffering at the hands of her mother-in-law and the unknown world of the big city around her. Vidya, on the other hand, speaks up her mind, and so suffers the anger of not only her father, but also loses the people she thought were her friends at college.

One of the best things about this book, is to see both these girls find their voices and discover their strength within themselves – rather than the popular knights in shining armors of western love stories. They both find that education is the way to their dreams – as Veda goes back to college and Vidya decides to peruse Civil services exams – they are focused on finding their independence, to find the cause that will give meaning to their working life, to make the world around them a better place.

While Veda’s domestic trouble may be cast aside as something that every woman has to go through, we need to remember she is only twenty. At that age, the world should be a place of dreams and adventures, not one of depression and darkness. She has barely seen anything except her home and hometown and she has a lot to take in as she moves to this new life. It is hard not to feel for this girl, who slowly learns to win over her internal fear and demons and faces the adversities both at home and at work. We are happy for her, when she finds friends and takes every small step on this path of discovery. As she discovers that:

Some rules are nothing but old habits that people are afraid to change.

You are remembered for the rules you break.

As Veda also learns life lessons at Sankalp, especially that it is a privilege to be allowed to help others. They do not need our pity, they only need our hand to support them as they climb up:

We are teaching them to fly, so do not be their crutch. Be their wings.

It is only when you experience deep sorrow that you truly appreciate the power of kindness.

Vidya, on the other hand, learns how our opinions and attitudes are formed by the friends and people we spend time with. While she is with the popular group, she is more focused on the outer looks, but as they avoid her, she makes new friends who show her a different side of life. Sometimes, it is one of the best learning experiences when you suffer a set-back, but you need to take it that way rather than wallow in self-pity.

Life is better when you do not have false friends. Even if you are alone, it is better than having people who betray your friendship.

Clutter is negative energy. As we hold on to it, it does not allow new things to come into our lives. Only if we let go of the old, can we make place for the new.

And something that both Veda and Vidya wholeheartedly believe:

Speak your mind. Have the courage to go for what you want and stand up for it.

Although the book starts with Veda and Vidya and remains mostly focused on their lives – Part Three is more focused on Sankalp and the kids who go there. It is not possible to not like these kids who are trying to make a life for themselves in spite of no material possessions and juggling the family circumstances, abuse and menial jobs at their young age. They are talented, bright and ready to burst with energy only if they get a chance. While we admire institutions like Sankalp, the writer also shows how their good intentions can sometimes get lost in bureaucracy and following rules.

With so many sparkling characters and multiple threads in the story, the book covers a wide range of emotions and every character shows some redeeming quality.

It is a good combination of inspirational messages woven through real-life stories and you’ll enjoy reading it. At 325 pages, it is a good, lazy afternoon read.