Mahabharat or Mahabharata, the complex most epic around the world, is full of emotions, attributes and more importantly “lessons one should learn from“.

Since ages, it inspired authors to not only take inspiration from the same but (urge a wish inside to) to retell it once in their lifetime.

The retelling obviously has some of the differences in the plot and the way the events are explored then the most popular version. While in one way, it may represent the incidents from a different perspective, it also gives the storyteller a chance to share his vision for it. Probably retelling is the reason that such epics are so much popular and alive since thousands of years.

Ashok K. Banker is a well known author whose readership includes mythology and thriller lovers. He was one of the authors who has adopted E-Book format in very early days. As far as I can recall, he got his official website developed and readers could join it to read his books. Of course, with the rise of Kindle EBooks and its increasing popularity in India, the EBook readers are going for Kindle EBook version.

Recently, we found a fantastic book deal for Satyavati And Shantanu by Ashok and we couldn’t resist ourselves from grabbing it. And we are happy for the decision. From our team, I got a chance to read this book and here I am sharing my unbiased views and reviews for the same :).

Of course, we must not judge a book by its cover page only. At the same time, I firmly believe that a book cover plays a significant role in book purchase and/or read decisions. 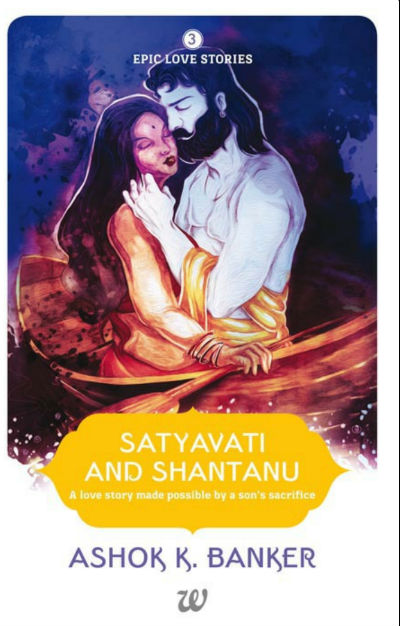 Illustration of Satyavati and Shantanu sharing a moment of love makes the cover page quite impressive and it goes in sync with the story as well. The illustrator didn’t forget to add a boat (though it is not perfectly in sync with the illustrations of the character) which was the main connecting factor between both the protagonists.

Shantanu, the king of Hastinapur was a son of a brave warrior and he himself was a good ruler. As he is not the main character of Jaya (aka JayaSamhita) from which a significant part is popularly known as Mahabharat (aka Mahabharata), he is not given much footage. And, often people mistake him as a ruler with personal limitations. The book, however, is meant to explore the incidents which lead Shantanu to meet Satyavati (aka MatsyaGandha who later became YojanGandha) and thus focuses on the same.

It starts with the time when Devavrat is returned to his father Shantanu by Ganga. Devavrat, with his remarkable versatile abilities, become an important part of Hastinapur. Eventually, he was declared as the crown prince and thus the successor of Shantanu. And, he is eligible for the same.

Things took an unexpected turn when during one of the hunting trips Shantanu sees a young fisherwoman who ferries boat on the mighty Ganga. Eventually, Shantanu was mesmerized with her and fell in love with her. We come to know that she was the daughter of the tribal chief. Shantanu met her father with a genuine intention to get married to her.

Their meeting didn’t go as Shantanu has expected.

What happened at the meeting? Well, most of the readers already know. And, those who don’t (if any) should read this short book to know more about it.

First thing first, this book explores only a small segment of the great epic “Mahabharat” so don’t expect anything which doesn’t fall in that context. While we got to know more about Satyavati’s father through this book (than the most common knowledge about him, there are no details about sage Parashar and his union with Satyavati (apart from brief reference).

The author is quite sure about what he wants to include in this book and what he wants to skip and based on what you expect from the book you can consider it as a positive or negative aspect of the same.

The author is really good at elaborating scenes and you witness his expertise throughout the book. In fact, the initial segment of the book is full of many such good scenes.

At the same time, Ashok Banker’s way of referring high philosophical values yet inevitable life lessons through simple yet effective lines is quite visible throughout the book. Here is one example:

No man could mourn forever, no heart could grieve indefinitely.

It is a challenging job for any author to elaborate emotions through his writings. And the same can be said about the periodic values. While a reader’s clock is moving in seconds, minutes and hours; the incidents in the book tend to take lapses of days, weeks, months or years! It is tough to talk about the passing time and elaborating its effects on the prime characters of the book. Let me share you some interesting lines from the book where the author did it beautifully.

In four short year, the young boy Shantanu had encountered by the river had grown to become an admirable young man. His innocence had been honed away through exposure to the daily politics of statecraft, and replaced by a canny understanding, insight into human nature and ambition…
Yet even in the moments of triumph, he never rubbed salt into their wounds or pressed their snouts into the foulness of their mistakes, choosing instead to smile with a twinkle in his eye and a friendly pat on the back…

One of the most remarkable attributes of ancient Indian literature is the way it weaves the nature in the stories. We know that rivers are referred as mothers in many hymns and ancient references. The author carries forward the same tradition and refer rivers as sisters. This way of giving a human touch to the nature is really interesting. Here is an example:

The book has some effectively written lines which talk about the wisdom of a prime character in the book.

.Even at that tender age, he was still wise enough to know that a powerful king always had enemies.

And the harsh and hard realities of the life which are nothing less than a bitter truth are explored effectively in lines like:

…. for there comes a time when such a man’s fame itself becomes his most powerful weapon.

And yes, if you love to explore wordplays, the book has some :).

…. but in any case it was not a matter of state, it was a matter concerning the state of his heart!

At the same time, some lines are effective in terms of sharing the emotions they are intended to, have some mistakes and could have been written in a better way.

.
It was amazing what a difference the simple removal of daily stress could affect on a person.

Overall, the book has more positives than the letdowns.

On the whole, a nice short read for those who want to re-visit the Shantanu-Satyavati segment from Mahabharata. I will suggest you to watch out for a good book deal and buy it when a promotional offer is running to get the best value of your money.