Mahabharat aka Mahabharata is the greatest, longest and most complex epic around the world. No matter that if a specific book series is going to break the record in terms of length (“number of words”). The way it is accepted and loved by millions of people will remain unmatched. The way it weaves the complexity of relations and society in a brutal yet aesthetic way is something unparallel.

Most of the people consider the Mahabharata, a story of a war. Of course, a great battle known as the same name is an essential part of the same. But the story had begun a long ago (in term of incidents and events which lead to the battle), and it moves forward a few generations after the battle itself. So, the battle of Mahabharata is simply a part of the entire epic, officially named as Jay (aka Jaya).

Every author, or let me say the majority of the authors, who are familiar with Indian mythology, has a desire to re-tell the great story from his/her perspective. Some author fell in love with some of the characters so much, that they consider that the respective character(s) is(are) not elaborated properly in the most popular version of the epic, and thus come up with the stories where the respective character(s) is(are) at the center of the story.

Anyway, let us talk about the love stories referred in Mahabharata explored by author Ashok K. Banker. Ashok has written 5 parts or 5 books (till now) in epic love stories – series. Here are quick links to our unbiased reviews for some of them.

In the same book series, one important love story is of Ganga and Shantanu. Ashok wrote a small book exploring this love story with the tagline A Love Story Written On Water.

No matter how good the content of the book is, it is the cover page of the same which makes the first impression. And, it often proves to be one of the most important factor behind purchase/read decision(s). 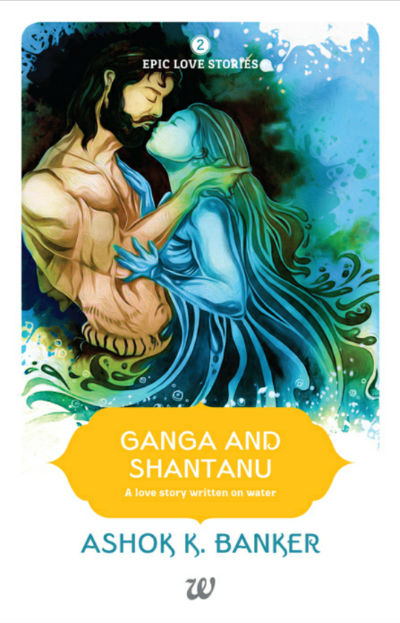 As you can see the cover page explores an illustration of the royal couple. The way the illustration is made, it justifies the tagline A Love Story Written On Water, especially the lady’s illustration and the way it dissolves.

It all starts with the story of king Mahabhisha. He was a king from the Ikshvaku clan. He was a very powerful warrior and a very prominent figure of his time. He visited councils of Deva quite often.

He visited one such council where Lord Brahma was also present. And when the council was going on, Ganga, the river Goddess and the daughter of Brahma came to meet her father.

In a fateful moment, the wind blew in such a way that the only garment Ganga wore untangled. It was a moment when she was all in her birthday suite. While all the attendees lower their eyes to respect the modesty of the lady, Mahabhisha couldn’t do that! Ganga caught his sight and reciprocate affirmatively. So, it was a mutual short affair!

The things, of course, didn’t well with the elders and eventually, a curse was thrown to Mahabhisha and his partner in crime, Ganga, was also destined to suffer the consequences.

Mahabhisha was later born as Shantanu. But, before his birth, Ganga reserved her place as the wife of yet-to-born child to King Pratipa!

What happened then after? Well, the tale is very popular and thus known to all those who have even a remote connection to Indian mythology.

Ashok K Banker is definitely a gifted author. He has the skills to explore a fantasy world on the pages. The way he elaborates a scene or explains the attributes of a character is worth reading.

Truthful and courageous, he was renowned for having performed one thousand Ashwamedha sacrifices and one hundred Vajpeya sacrifices. For his devotion and sacrifice, he attained entrance to the heavenly realms and was honoured by the devas.

See, how effectively he has explored the stature of King Mahabhisha.

Writing or retelling any segment of Mahabharat is like walking on a tightrope. On one hand the author needs to take care of hurting the sentiments of the reader(s) – as the epics of Ramayana and Mahabharata are considered sacred in a large number of household and a large number of characters are worshiped by the people – and on the other representing the already known tale in interesting manner.

Elaborating characters flawlessly by keeping intact the weaknesses of the same is one of the key factors to that. This is how he describes the beauty and power of Ganga.

Dolphins leaped and sang in greeting, turtles swam around her in homage and her power over the river was evident.

At the same time, the author delves into human psyche quite effectively. The way he talked about a prime character of the book is entering into his youth is quite realistic.

… and of the age when anything seems doable, even the most extraordinary feat imaginable.

And in addition to the vulnerabilities, the author talks about the strengths of the characters quite convincingly.

He swallowed. Nervousness was never one of his traits. A strong, powerful man with great gifts of mind and body, he had been raised without reason to doubt himself or his abilities. Yet before this vision of a woman, he felt tongue-tied and as nervous as an errant disciple before a stern guru.

The book has some really nice wordplays which will grab your attention. I like the way he talked about the dilemma of the king and his choice of free will in a specific situation.

At this he paused. So he had a choice. That was good. Some part of him. the most mature part, the part that has been schooled so thoroughly in the Vedas and Shastras, the science of kingship and governance, the legal aspects of society, that sill sane part whispered that it was a fair offer: he was free to reject it and go his own way. There was no coercion involved.

Continuing the same, there come even more interesting lines:

Of course, sometimes the most powerful form of coercion is the illusion of free will itself. Thus does destiny tempt and seduce us time and again. ‘I Chose’, we say proudly. But what other choice did we truly have?

If you are a fan of short yet effective punchlines, here are some of them from the book:

Only a gifted author can bring such nice lines to paper:

He felt a surge of panic, as an addict of soma feels when told that there would be no further supply of his precious honey wine for an untold length of time.

I like the way the book talks about true love and how it makes one practice monogamy instead of the (then popular) practice of polygamy.

Men who seek comfort in the arms of new women each night are men who have not discovered the supreme pleasure of the perfect union.

While the psudo feminists struggle in finding right words for woman empowerment and gender equality, the author, quite nicely brought in the importance of consent and more importantly love in the act of a union; in a simple yet effective way.

For it is love which is the ultimate aphrodisiac and without the emotional bonding and joining of souls, the act itself is merely violence without weaponry. An act of rage rather than pleasure.

Being a love story where the free spirit is very important and belong to a time and culture where it is highly respected, the presence of श्रृंगार रस is quite obvious. This book, thus, contains a lot of material which aesthetically talks at a length about physical beauty and desire of sex. The book, however, draws a fine line which the story never crosses. Nevertheless, it makes the book “for adult readers only”

While most of the people know Shantanu as a king who grew up in wealth and had a fall for beauty, not much about his bravery, warrior skills or any other aspects is explored. This book talks a little about that, which is good to read.

In terms of literary qualities, the book is really rich. And, some of the spoiler-free segments I’ve shared above can advocate that for sure. Ashok’s vocabulary is rich and his grip on English grammar is strong. And, it makes things better for a reader.

In a short story, the author gets comparatively lesser number of lines to build the things up and make the story gripping. It is a challenge for the author to make the reader curious about the rest of the story and developing an urge to explore it, from the first couple of pages. And the author successfully does that.

Let me conclude with nice philosophical yet realistic lines:

I bought the book during a promotion, so for me, it is the best value for money. I suggest you keep an eye on various offers running on periodically at various online stores and buy it at the right time.

I enjoyed this short EBook and I am sure any adult reader who love to explore romantic tales linked with ancient Indian literature will enjoy reading the same.

Previous: Five Minutes Longer By Siddhant A. Joshi | Book Review
Next: One Free Ebook Every Month For Amazon India Prime Members | May 2019 Catalog