India is the largest democracy in the world. The name India is however given by the foreigners. The original name is “Bharat” (भारत) and that’s why it is officially written as Republic of India in English and भारत गणराज्य in Hindi.

The name भारत is a tribute to the great King Bharat from the Chandravansh clan. He was the one who brought in the concept of a Nation and weaved the tapestry of various states into the nation – भारत.

This great king had great parents and there is a lot written about them as well. His mother Shakuntala was the daughter of Sage Vishwamitra (the first and only non-brahmin Brahmarshi) and celestial nymph Menaka, raised by sage Kanva. His father Dushyant (aka Dushyanta) was a great king of Hastinapur who was a fantastic administrator and ferocious warrior.

I think the following books will interest you to know more about these characters.

The stories are related to Mahabharat (aka Mahabharata) as it was Bharat whose descendants fought the great war of Mahabharat against each other!

Today, however, let us talk about the Epic Love Story of Shakuntala and Dushyanta explored by author Ashok K Banker in the form of a short story.

How many times have you experienced that you are attracted to a book simply by its cover? Well, when you are exploring a large display of books, it is the cover page which comes into your eye-contact right? And it makes the first impression which lasts for long.

Of course, the cover page is (and should not be considered) as the only factor to judge a book. You, however, cannot ignore its influence on the purchase and reading decisions too. 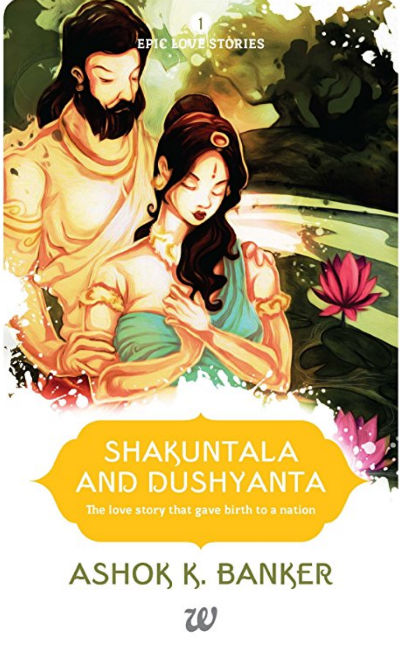 As you can see, the cover page is fairly attractive. It has illustrations of Dushyanta and Shakuntala in an intimate pose. Actually, the author has penned five books in “Epic Love Stories” series, and you can find a large number of similarities in the illustrations of the characters in all them. This is the first book in the series in terms of reading order.

The characters are not facing each other, but still, you can feel they are looking at and thinking about each other. The illustration of lotus flowers and other stuff shouts that it is a snapshot taken from their meeting at a beautiful natural place near Sage Kanva’s Ashram in the jungle.

An impressive cover page, I can say.

It all starts with one of the hunting escapades of Dushyanta, the king of Hastinapur. It was the favorite pass time (or hobby) of the king (and many more, yet to be born, in his lineage). This hunting experience was really fantastic in the beginning and it raised the adrenaline in the king, and in the ecstasy, he got deeper and deeper into the jungle.

But, everything doesn’t go as per the plan, and that’s why we call it a “fate”.

The jungle keeps getting more and denser and eventually, the sources of water started disappearing. The Sun is also playing its role and the king was reluctant to find water by getting even deeper in the jungle. It resulted in thinning his convoy (including men and animals both). And, he himself was also in the desperate need of water, the primary source of life, after the air.

When he was about to lose all hopes, he found a beautiful place, a jungle within the jungle. It is a charming place where he saw hunting and hunted animals drinking water together from a source. No one is a predator and no one is prey there!

And, he meets with Shakuntala there.

How? And, what would be the outcome of their meeting? How a chain of incidents started from here and how it is resulted in “then they lived together ever after” moment? You can read this fictional book to get the answer(s).

When you write about anything related to Mahabharata (or any other Indian Epic) you are tempted to cover many things, points, and aspects from many stories from different timelines. The author, however, has wisely drawn a boundary and remain focused on the incidents directly connected to the love story of both the protagonists, Shakuntala and Dushyanta. Everything and everyone else took a backseat. And, that works in favor of the book.

The author is good at exploring nature convincingly. In this short EBook, he shows both the side of nature, the beauty and the anger. No, there are no natural calamities explored in the book. But, whatever happened in the Jungle with the king and his convoy is something very similar we are experiencing slowly in the current time, and possibly a harsh future is waiting for us, if we don’t understand now.

Anyway, let us stick to book, and let me share the lines I found really fascinating when it comes to showing the anger of the jungle.

The forest had its revenge on the invading force. The riverbeds were parched, the ponds dry. Not a drop of water was to be found for miles and miles. Search as they may, they could find no trace of water, running or still. Surely the animals must stake their thirst somehow. But the animals could not speak, nor did the forest yield its secret.

The very idea of considering the forest as a character amazing.

For a storyteller, it is always a challenge to explore the attributes of a character. On a cinema or TV screen it is easy to convey such a thing, but representing them using words is definitely a tough thing. Ashok Banker, the author, explores the persona of the male protagonist though nice lines like:

His enemies feared him enough to show great respect and avoid confrontation – those that were foolish enough to oppose him in battle met with devastation and ruin, and were massacred or enslaved.

And at the same time, the innocence of the female protagonist is explored beautifully in these lines:

Shakuntala shook her head. ‘I do not know of this gandharva marriage. I am unaware of such matters. How can I agree independently? I ask you again, wait until my father returns. Ask him for my hand in marriage. If he consents, I shall not refuse you.”

And, when the father sees wisdom and selflessness in his child, even during the toughest of the times, he feels very proud. Both, for the child and the fact that he/she is his creation or his extensions to say it better. The author brings this emotion beautifully as:

And in his mind, he thought, This is truly my daughter. Even at such a moment, she did not ask for anything for herself. Only for her husband. Dushyanta is a lucky man to have her as his wife.

We have heard many times that “love is blind”. Actually, it prevents one to view the things as is. It is because one wants to believe that someone he/she care for, actually cares for him/her at the same extent, if not more. Same happened with Shakuntala when she was waiting eagerly and desperately for Dushyanta. The author explores her feelings as:

Her mind always found some way to rationalize and justify the delay, never once blaming him for the lapse. It was never Dushyanta who was at fault, merely circumstances, or the weight of kingship, or some unknown cause

It is a book (like many of them from ancient Indian literature, in their original form) which reflects the real idea of women empowerment. The pseudo feminists need to learn a lot about the real meaning of gender unbias and other stuff. Shakuntala was an empowered woman. Of course, she grew up under the wings of sage Kanva and she has the worthy bloodline. But, it is her own conviction, dedication, intelligence, commitment and wisdom which makes her so. I will suggest you miss a single word uttered by her in the court of Hastinapur. When she argued for the Dharma and other stuff, her words are simple yet loaded. For example:

Not for nothing is Yama lord of dharma as well as death.

Also, the author brilliantly explains her position in the court:

She was an island of dharma in an ocean of injustice.

The swan, on the other hand, seeks to separate milk from water to drink it. Similarly, the wise seek words of wisdom and quality when listening to other people speak. They ignore the bad or ignoble words and phrases and pluck out only for good, separating them from the rest like wheat from chaff.
— — — —
Fools take great pleasure in berating wise men. Wise men keep silent when confronted by fools, choosing rather to walk away than engage them in puerile arguments.
— — — —
It is a fact of life that the truly evil person always insists that he is truly good and that those who are genuinely good are truly evil!

The author’s depiction for true love comes up quite effectively in the book:

Even in exile, a wife refreshes her husband when all else is lost.

And yes, the way the circumstances force a person to change in entirety is mentioned in simple words:

Thus did kingship change men from flesh and blood to iron and gold with hearts of steel.

If I had to choose only one line from the book which is philosophical yet realistic, I would go for the following:

The honest person is always predictable for he or she will always do what is right!

So, by now you must have got an idea about the quality of writing in the book.

The characters are well defined and gradually they show different layers. Some readers may think that the author has tried to favor Dushyanta by giving logical reasons and enabling him to justify what he did.

This book (and all of the 5 books in the series) are filled in with श्रंगार रस. Of course, the author keeps a fine line and never let it be erotica. But, consent is required to read it. Love stories are meant to be explored by the mature (mentally) people, anyway.

I bought it during a book promotion and thus it is the best “value for money” for me. And, I will suggest you look for various offers (which we regularly share on our social media handles as well) and you will find the best time to purchase it.

Overall, it is a swift read which takes you to the journey of ancient times. If you already know (and you must) the story of Dushyanta and Shakuntala then also, you will love exploring this version.

Previous: The Kumbh Travelogue 2019 by Anuj Tikku | Picture EBook Review
Next: Listen To Any Song And Get Paid – Amazon Prime Music