The February 2014 issue of Reader’s Digest magazine (India Edition) is out and here are my personal reviews for the same. 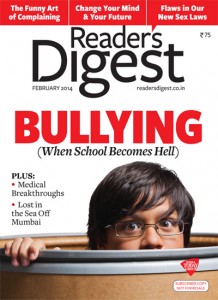 The cover page show a frightened student who is a victim of bullying and there is a hint of an article about the same inside. Genuinely I feel that bullying and ragging are considered as crime. Like rape, they hurt the mind even more than the body. The cases we had seen in movies like Table No. 21 or Zinda are not far from the truth. Sometimes it results into death of the victim and in lot of cases it lead the victim to lose his/her path in the life. The article also provides some hints to what to do to counter-fight those who bully you.

In editorial Mohan Sivanand talks about his views about bullying and his belief regarding the sex laws and why we need to take a fresh look at the same. He truly says that bullying someone else is rather a mindset one have developed.

React section contains several reactions about the past issues of Reader’s Digest. One such reaction by Dr. Jinu Mathew made me to think that why there is no – how to behave in emergency – for example when fire caught – situations – is not taught at school level in India? Shouldn’t we include such practical aspects in our syllabus as well?! What you think? Do let us know via comments below. If you have watched Arnold Schwarzenegger movie Kindergarten Cop – you have watched how the kids are taught to form a line and evacuate the area without creating/being a part of chaos. It is definitely a good and healthy approach. We hear the cases that the chaos at so and so tourist place, temple, mall or something similar resulted into the casualties of people. The proper knowledge of disaster management and training should have made people more responsible and awakened that such things have not happened at all! By the way, the same section contains a person’s real experience of the India-Pakistan partition time when two trains from India to Pakistan and Pakistan to India met at a station, how they saw the people in both the trains having same condition and even helped others! How can manual boundaries separate people’s heart?!

What I like the most in – Ask Laskas – segment is the advise to the young dude to help others in need.

My Story – brings the stories which are not ordinary – and this time it is the real tale of Michel Clark. Michael is also known as lion man and he shares a great bond of love and affection with lions. You have to read this article to know that even lions can be befriend with.

– whose book often took #1 place in the bestseller list. The interview is refers his book David and Goliath: Underdogs, Misfits and the Art of Battling Giants

. You will find it interesting to know the author’s view about Bill Gates, Steve Jobs, Oscar Schindler and others. His theory about – in real life weak wins and strong lose – is interesting read as well.

Our favorite segment in any issue of RD is definitely – The Kindness Of Strangers. We appreciate people having real human qualities. They are the ones who makes the Earth the better place to live. This time there are three real incidents of such real heroes brought to the light, they are…

Looks like film titles right 🙂 They are all good to read.

Story Telling : The African Way; is an article by Henning Mankell

(who wrote many books including Wallander novels

). The article gives you good amount of information and insight about the literature of Africa.

Do you know that there are people who love to affix padlock at various part of bridges to symbolize their love?! A bridge named Hohenzollern in Germany have more than 40,000 padlocks affixed by such lovers! You got to see the pictures inside this issue.

It is said that – truth is stranger than the fiction – and, the real life drama segment of this issue brings us such a similar story. It is the story named Lost In A Savage Sea by Deven Kanal. Small yet good read. The illustration is good.

So what is life really like in Arab world – brings us 10 facts in summarized manner about life there.

The funny art of complaining – the article is not only about but also bring us some weird cases.

As the magazine completes 92 years (clap clap clap), it is good to see the photographs of the founders of the same (Lila Wallace and DeWitt). And the photograph of the very first issue of the magazine (published in February 1922) is something vintage to see.

Tomorrow Town – is a science fiction article where the attributes of possible town/city which could be reality in the coming days – are discussed. Well categorized and summarized article. After completing the article you will think that all these should become reality.

The 11-year engagement – is a love story worth a read.

Change your mind – change your future. It is rather philosophical phrase and if you think from that angle it is very true too. If one change the mind (the way of thinking), one’s future is changed for sure. The article about attitude is summarized by David Shephard whose detailed material is available at http://www.performancepartnership.com/.

Outrageous – section brings one of the burning issue about – How a public hospital treats people. We saw unfair behavior at various public hospitals including but not limited to government hospitals, hospitals run by foundations, trusts etc. Of course, not all of them are bad in behavior, there are some genuine too, and we appreciate them. But, in majority of cases, we need to re-think and change the behavior for sure. People coming to such hospitals should not have to compromise with their self-esteem and should be attended promptly. Running something like a hospital is a great responsibility and it should be managed the responsible way only.

Your Amazing Body – this article have two major sections. (1)The extra ordinary things the human body accomplishes everyday and (2)The health advances that will keep it humming for years. Definitely an interesting article you should not miss.

Overall a nice issue which is worth the time and money you spend for the same.