Microsoft Corporation is definitely one of the biggest company in the Information Technology field. Its founder and first CEO Bill Gates remained the wealthiest human being for many years. Later he shifted his focus to the humanitarian work and Steve Ballmer took over as the CEO of Microsoft. After serving Microsoft for 3 years as the CEO (from January 2010 to February 2014) the time for him to focus on other aspects of life has come.

It resulted into the search of the new CEO for Microsoft and previously less known (at least at such large canvas) Satya Nadella was found fit for the position. It was 4th February 2014 when Mr. Satya was appointed as the CEO of the company. 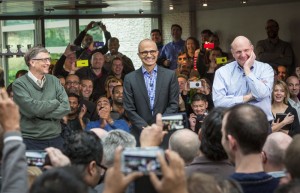 Here is his first interview as the CEO of Microsoft.

Do let us know your views about Nadella Satyanarayana Chowdary, better known as Satya or Satya Nadella, Microsoft, the direction he may took Microsoft towards, and anything else related to the same; via comments below.