Safari is a knowledge magazine from India which is running since many years. It had a set back period also, but, eventually, it was revived and is running stronger today. With the limitation of being available only in Gujarati, a regional (famous and popular too) language of India, its reach is limited too. It is worth to note that the magazine has tried publishing its English edition also, but unfortunately, it didn’t survive. The Gujarati edition is running strong, mainly due to the will power of Nagedra Vijay, the one man army behind the magazine; and yes, the love, affection, and respect of the readers for both the magazine and Mr. Nagendra Vijay.

Possibly thousands of magazines hit the newsstand every month but not all of them are worth your money and more importantly – time. Safari is a magazine focused on facts, science, and knowledge. The editor puts in an immense amount of efforts to make it error free.

Let us talk about June 2019 issue of Safari Magazine – Gujarati Edition (which is 301st issue of the same!).

Let us take a look at the cover page of this issue. 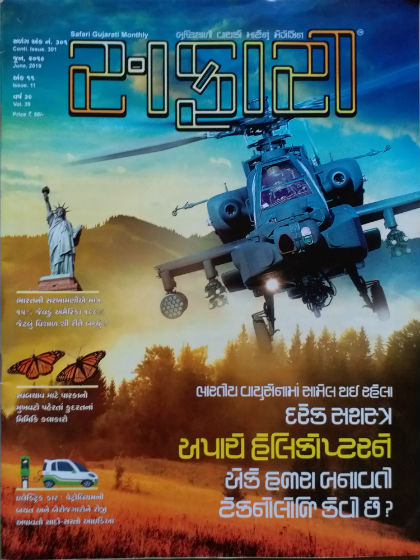 Being an entrance to the world of content within, the cover page plays an important role in influencing reader’s reading and purchase decisions. As you can see, the cover page is quite impressive.

The illustrative photograph of Apache AH-64E, the latest helicopter added in Indian arsenal, makes the cover page impressive. The color scheme gives an impression of a war related book. Other major articles of the issue are represented on the cover page with a thumbnail and title for each.

Regular readers of ThinkerViews know that we advocate for reading editorials. It is probably one of the ignored areas of a magazine by a reader. Actually, it is one of the most important segments of any issue which should not be ignored. It allows the editor to connect with the readers directly and share his/her vision about the content of the magazine and even the latest happenings.

The “Reader’s Reactions” segment does the opposite. It allows readers to convey their messages to the editor. Mostly they are about the last issue, but often more than one magazine issues are referred as well.

The editorial of this issue is quite emotional and explores the disappointment of the editor from the system. In reference to the fire tragedy happened in Surat, Gujarat (which claimed lives of many students); the editor mentions how he is advocating for the fire safety techniques and tried to meet various officials of Municipal corporations of his city in the ’80s to discuss the same. He was very keen on the technology which was new those days and could have saved several lives if it was available when this mishap in Surat has happened. He was however discouraged by the authorities :(.

Note:
There are so many videos of the tragedy are available on YouTube’s public domain and so does pictures and images; I am consciously avoiding to embed them here to respect the dignity of the dead. I would suggest you to read this article about a real-life hero who saved lives during this mishap otherwise.

If a genuine nationalist who wants to do better things for his/her motherland is discouraged and authorities are not found keen in taking advantage of his/her knowledge which is earned over decades; how can the nation progress positively and safely?

It is overwhelming to read the reader’s reactions segment. Most of the readers have congratulated the editor on successfully reaching the milestone of publishing 300 issues of Safari. For a film or entertainment or sports related magazine it is an expected milestone. But, for a magazine focused on Science, Knowledge, and Facts, it is rare to achieve such a milestone. And yes, some readers have shared their emotional moments and attachment with the magazine.

I will suggest you to not to miss either of the segments.

Apache AH-64E, the latest addition in Indian Armed Forces is in talks for its capabilities. Actually, the war experts of Indian Armed Forces are advocating for the modernization and updation of its arsenal since long and it is getting updated periodically. This is indeed a good addition.

[A video exploring various features of Apache AH-64E from YouTube]

For a common man though, most of the technical details are not digestive. In an interesting article, Capt. Vijay Kaushik (pen name of Nagendra Vijay himself) tries to explain the things in simple wods. The center page of the issue has an illustration of this helicoper alongwith details about its parts and features. It is very informative.

Definitely, a good way to understand the might of the beast :).

How USA Became So Big?

Considered as one of the superpowers of the world, referred by many as the most powerful country in the world – America – popularly known as US or USA has an interesting history. When European needed to find a way to India, various brave explorers have initiated many voyages. Of course, not all of them got the success they desired. But, eventually, they lead to finding the existence of many areas around the world. America was one such discovery. Who found it? Well, there are facts apart from popular beliefs, so please don’t ignore them.

In an article about USA, the author tries exploring various incidents which lead to the discovery of the land, how it was earlier a group of 13 colonies, how they became 13 states and how, eventually, it became today’s USA – the union of 50 states. It is rare to find such a comprehensive history for one of the biggest countries in the world in terms of various aspects.

To avoid spoilers I am not mentioning details about each of them. None of them are to be missed.

There are some fantastic wordplays in the magazine. Here is an example: 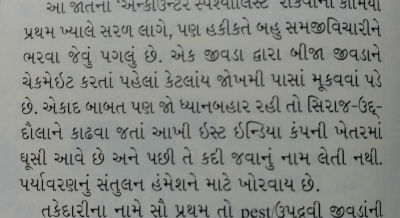 Actually, Nagendra Vijays’s writing style makes even boring topics quite interesting. And, he is the master of the language. The way he includes idioms, proverbs, and sayings, is amazing.

There are a couple of proof-reading errors also (see the name of the aeroplane it refers) like the following: 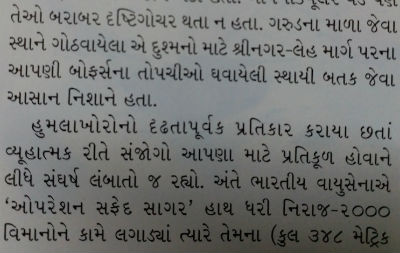 In such a nice and informative magazine such small points can be ignored easily. However, readers of Safari are not just regular readers who read for the sake of it. Most of them pay very detailed attention and they will surely pinpoint such things.

Previous: Why Should I be Good by Shweta Sumit Agarwal | Book Review
Next: Oleander Girl by Chitra Banerjee Divakaruni | Book Review