If there is anything we cannot buy with all the resources we can have, it is “time”. That’s why we need to spend it thoughtfully. The problem, however, is we cannot control the flow of the same! We like it or not, it passes at its own speed.

If we try to learn everything from scratch, the lifespan is not sufficient. The best way to do it is, rather than exploring everything by experience, we need to explore it through the knowledge, saved in the form of literature. Be it books, magazines or something similar, they provide us a mean of communication and carry forward the facts and entertainment both.

Talking about magazines, we know that there are hundreds of magazines published every month. And, we possibly cannot explore all of them. So, we need to shortlist a few issues to go for, from the large list of magazines published every week (or as per their periodic schedule). Safari is one of our favorite magazines as it explores factual knowledge. The articles written within are studded with informative graphics, images, maps, statistical figures, references and much more. It adds to the credibility of the magazine.

Let us take a look at the cover page of this issue.

Cover page of this issue has a dark background where you see a gigantic planet along with many small planets and meteors traveling in the space coming toward the reader. 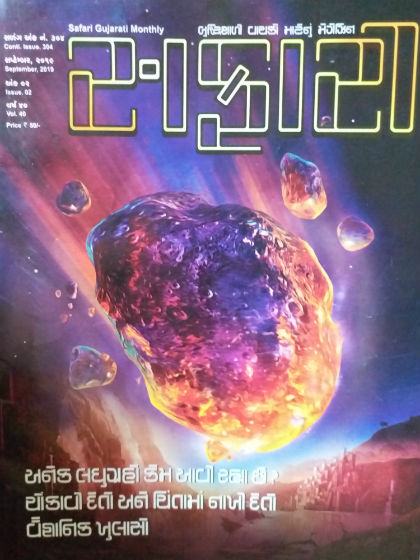 The illustration gives an impression of viewing this scene from the surface of a planet.

Overall, it is giving an impression of geographical or science-oriented magazine. A little dull yet attractive. Possibly putting titles (or mentions) for some of the interesting articles published within, and having a little brighter color scheme could have made it even more attractive.

This time the editorial is written under the title “Letter from the editor”.

To avoid spoilers we cannot discuss much about it, but the editor courageously talks about Article 370 of the constitution of India (that is Bharat). The editor doesn’t take anyone’s side and represents the historical incidents as is. And, he is doing journalism since decades, so he knows the things much better than many other so called experts.

You must read this 2 and a half pages letter for sure.

The union territories of Jammu, Kashmir, and Laddakh are the most talked topics around the world. The author – Sushil Bhatiya – tries to explore the 11,000 years old history of this region. Even if you consider talking about written history only, then also, we have documented literature for this region for last 5000 years!

The small and summarized article talks about the history of the place, how the places and tribes are named; and most importantly the “Sage Kashyap + Meer” = Kashmir theory.

You shouldn’t skip this segment.

In FYI segment you will find articles talking about

Reader’s reaction segment contains the letter which will show you the positive influence of the magazine and Mr. Nagendra Vijay on many generations. It also talks about the ignition of a revolution by sailors was not so successful and was a political party’s back of the hand was there in its failure?

How the idea of Pakistan was conceived?

Most of the people consider Muhamad Ali Jinnah as the man who presented the idea of a separate nation for Muslims when India (that is Bharat) was to get independence from the British invaders.

It was Iqbal, the famous poet, who wrote the famous song – सारे जहाँ से अच्छा, हिन्दोस्ताँ हमारा। – which is still played in India and is respected by the countrymen; who brought in this idea. 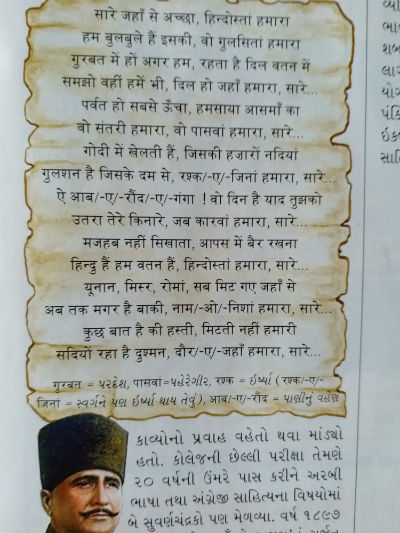 How can a person who was so mesmerized by the land and environment of India – aka Hindustan – think about the partition of the nation?!

Well, rather than coming to a hurried conclusion, we need to know about the events and incidents which made him change his perspective.

It is really a well researched and well-written article which brings in a lot of lesser-known or unknown facts. It also elaborates many historical facts which are rather ignored in history books in the schools. You will also find it quite disappointing that Iqbal’s song written for Pakistan is not accepted as the national song there.

We hear a lot about Global warming and its adverse effects. Actually, scientists and weather experts were telling the same things since years, but, we, the human beings have ignored it and now started tasting the fruits of what we have seeded.

The rise in the frequency of tycoons, tsunamis, earthquakes, and other natural calamities is not for nothing. The disturb seasons, too hot cities, heatwaves, and ice storms are all result of the imbalanced environment.

There are several things that rarely come to our notice is about the raising ratio of melting ice especially in Antarctica and Greenland. We need to understand that it is not a small thing which we can ignore. It affects a lot of passenger and cargo ships traveling to affected areas. The casualties it leads to are often beyond calculation, as melting of too much of ice lead to the rising of sea surface which eventually claim the land. If it moves at this speed, the days are not so far when we see a lot of beaches and megacities at the bank of various seas and oceans are about to be lost under the water!

A detailed article about global warming from the perspective of ice melting, creation of icebergs and the dangers it brings in for sea voyagers; is definitely worth reading.

Virtual reality or VR is not a new word nowadays. It blends a virtual world with the read one. It has its own problems and it does create a lot of problems for those who experience it.

Augmented reality, on the other hand, proves to be very effective in adding information to what you are viewing (rather than creating a virtual world for you). And, it is proving to be a better solution at this point in time.

A detailed article about AR in this issue is not to be missed. The way it explains both VR and AR is really interesting. Even a person not knowing the full form of both these abbreviations will find it easy to understand and even a knowledgeable person will get something more to learn about the same. Be it the choice of words or the style of presentation, the writer makes it a delightful experience for the reader. We are moving into a transitional time when these technologies are not too far from our reach and will be taking a significant space in our lives in (possibly) near future. Definitely, an article one should go for.

Talking about all the articles will contain spoilers and more importantly, it will look like a mouthpiece article written for the marketing of the magazine; which is not the case. As we genuine admire the magazine, the quality of content and its reliability to a respected level, we would definitely encourage you to go for it. This issue contains articles about the following topics in addition to having some regular Q/A and Fun segments.