Like every month we were curious to read and review some meaningful magazines this month also, and as the regular readers of ThinkerViews know that Safari is always there on our to read list.

Though it is sad that English edition of this Magazine was unable to survive, it’s Gujarati edition is running smoothly and we provide you our unbiased reviews for the same every month. Due to Holi-Dhuleti festivals in the beginning of March 2018 delayed the availability of the latest issue of Safari a little.

So, without wasting any more time, let me present you my reviews for the March 2018 issue of Safari Magazine (Gujarati Edition).

Let us start with the cover page of the issue. 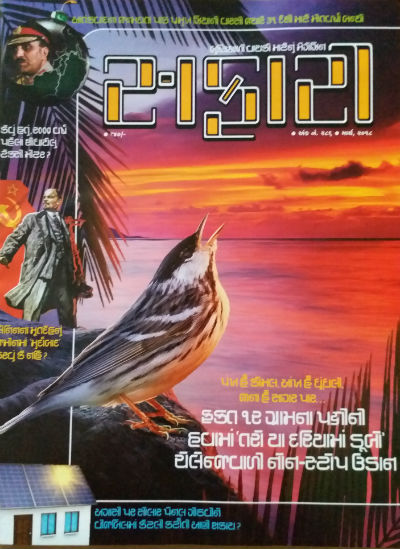 While it is said that a book (or for that matter a magazine too) cannot be or rather should not be judged by its cover; we all know that the first impression that is registered in our mind about any media is through its cover page. The cover page of this issue is attractive. The background uses a little dark color combination with them of sunrise or sunset colors showing a bird in the front. It creates a good impression on the reader/buyer. All the major articles available in this issue are shown along with its thumb impression making the cover page rich with information.

There is a good trend we see rising in many states of India including Gujarat to set up solar panels on the rooftop and try to get as much electricity as much possible using it. It not only helps in reducing electricity bills but also is a good alternative to the traditional way of producing electricity. Sooner or later we (the mankind) need to go for such pollution-free energy producing an alternative, without a doubt. So this is rather a good trend. In order to inspire and push citizens to for the same, the Government of India offers a subsidy of Rs. 20000 and the state governments are also offering various subsidies, in Gujarat it is Rs. 10000, which is in addition to the subsidy provided by the government.

Actually, a group of readers asked questions about knowing the work functions of solar panels, what they are? how do they work? and how cost effective this setup is? The result is a detailed article telling almost everything a layman needs to know about it. This article is a “not to miss” article from this issue, and I highly recommend it. Actually, if only this article could have published in this issue then also it will justify the magazine cost.

While Zia is considered as a hero by many, historians look at his actions which were resulting in creating chaos in Pakistan and seeding terrorism. Terrorists are terrorists and eventually, they may prove a danger to those who backed them.

The curious case of Osama Bin Laden is the well-known example of the same.

In a detailed article about the politics, Zia played is available in this issue of Safari, and it is “must read” for everyone to know how the hunger for power and clever yet cunning and selfish politics can result into something which later on became a headache for the almost entire world. Of course, India is sharing borders with Pakistan so it is affected more by the direct terrorism sponsored by Pakistan.

The article starts with Zia’s unexpected death in a plane crash and various theories about the incident. Whichever of them is possibly true, almost everyone unanimously agrees that the incident was not an accident.

In order to know more about Zia you can view the videos available in the public domain of YouTube.

The writing style of the author is really worth appreciating. He has weaved historical incidents very nicely. Often such articles became biased and boring, but this article is far from that. The remarkable amount of research done by the author is quite visible too. And, the article is studded with many graphics, illustrations, maps and historical photographs to add to the authenticity of the same.

What to do with Lenin’s dead body?

Vladimir Lenin is a historical figure from Russia. Upon is his death, the Russians did a remarkable job in keeping his body safe and secure. They spend a really remarkable amount of money and efforts to keep it fresh and look like as he was.

Those who visit Russia, and especially the place where his body is kept, choose not to miss a chance to see him with their own eyes.

Lenin’s idea of socialism is not going well in practical aspects and it almost broke down the economy of Russia (which was USSR then). Now the authorities there are in dilemma about whether to keep spending lakhs of dollar every year to keep Lenin’s dead body health or should they stop spending. As many believe that there is no point in keeping it the way it is now.

Ravindra Acharya’s article on this issue is worth reading part of this issue. In addition to talk about Lenin’s dead body and how it is preserved, he came up with many historical incidents from even other such political leader’s lives too. It is a small (4 pages) article which contain some good resources.

Often we don’t find the things interesting when we used to see it function in our routine life. For example, we don’t curious to know more about the odometer which makes taxi/auto rikshaw’s meter (to calculate the distance covered and thus the fare payable).

Do you know that the first such meter was made by Vitruvius? By the way, does this name gives you deja vu feelings? Remember the famous “Vitruvian Man” painting? Well there is a relation between Vitruvius and Vitruvian man.

By the way, the scientific link of odometer leads to Archimedes as well!

An interesting article about this essential equipment is available in this issue which takes you through the historical years. The article also covers the detail about the death of Archimedes. Overall, a very interesting and informative article which you don’t want to miss.

When we talk about the base of the modern medical surgery, the Bower Manuscript is referred with regards. But do you know what it contains? And what was the source of inspiration for him to search for this documents? And where they are held?

We talk about अतुल्य भारत (or Incredible India) and at the same time we know that Bharat (that is India) was the pioneer in many aspects. The invaders however looted a lot of precious gems (not only in the form of stones and metal, but also in the form of books and knowledge also) from this golden sparrow.

A small two page article about the Bower papers, and how a potter was able to do a fantastic nose surgery using the valuable books he inherited, is written nicely. There is a slight disconnect between the content of the first and second page though.

The article talks about Sushruta and his book Sushruta_Samhita and is considered to be must read by knowledge seeker.

Of course, there is a theme article in this issue which is about a small 12 gram bird which flies incredible distance in a single flight. Rather than telling more about it, I will suggest you to read it. It is worth reading. And it will surely makes you feel that how wonderful the nature is.

In addition there are various Q/A segments and puzzles which will work as a brain tonic and knowledge updater.

Also, there is an appeal to save the most fantastic language – Sanskrit – and the only newspaper named Sudharma is about to die, due to lack of readers. Do whatever you can for saving it. And as the government is very active in rejuvenating our ancient pride, it also have to come up with a solution for the same. We’ve talked about Sudharma newspaper in this review article in more detail, please visit it to know more, and I hope you will contribute a subscription to the same if possible.

I will also suggest you to not to skip reading the editorial.

Overall a magazine worth your time and money both. You will be investing your resources in something meaningful by buying/reading it. The only limitation it has is, it is in a regional language which limits its reach.