Regular readers of ThinkerViews know that, being an avid fan of quality reading, our team always search for quality magazines (in addition to other media). The motto is to find the magazine which is not only interesting, but explores something meaningful. Safari– is thus one of our favorite magazines. Here are our personal Views and Reviews for the July 2016 issue of Safari Magazine (Gujarati Edition). 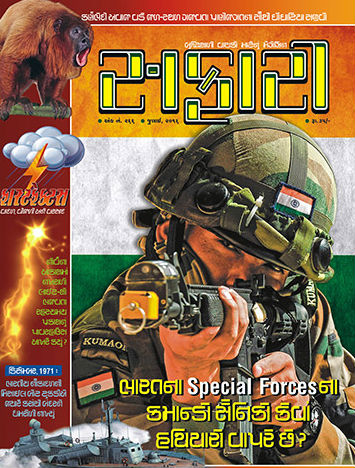 The cover page is attractive and gives the feeling of a magazine about armed forces at the first glance.

The thoughtful editorial and Sudharma Newspaper

We have repeatedly said that we consider the Editorial as one of the most important part of any printed media. As it not only serve as a bridge between the reader and the editor, but it also provides editor a chance to share his/her vision about the magazine issue, how the content is curated and/or about surroundings or latest happenings. Needless to say that it also gives the editor a chance to convey anything important to the readers.

The editorial of July 2016 issue of Safari is a not to miss one. Editor Harshal Pushkarna talks abo
ut how much (maximum) should be content v/s advertisement ratio in any magazine/newspaper, as per the guidelines. He then iterates that how some English newspapers are not following it and trying to focus more on earning money only. Harshal then talks about a Sanskrit newspaper named SUDHARMA. He brilliantly talks about how Sampath Kumar runs the newspaper just for the sake of true journalism and saving Sanskrit, the oldedst language from India.

The newspaper is not making any profit and it is alarming, they require more subscriptions, advertisements and financial support.

Sudharma – The Only Sanskrit Daily Newspaper

Official Wikipedia page of Sudharma available here.
You can read the Electronic version of Sudharma here.

The article about Superfast trains talks about Vacuum Trains and Hyperloop technology. For those who follow internet for latest technology related stuffs, some of the stuffs might have already known. The article however talks in detail about various technologies, the test conducted so far, the prototypes and other aspects. Here are some videos which will help you know more about the technology.

The article is well researched, and kind of “all about” for future trains. We recommend this short article.

If you want to know more about Clouds and Lightening, the fast facts segment summarizes it effectively in 2 pages, with some illustrations. A small yet informative segment.

Hessdalen lights of Norway are vary famous, especially among travelers. There is actually an entire website is there dedicated to it, which you can visit at: http://www.hessdalen.org/index_e.shtml. D. N. Kaushik wrote this article in interesting manner. We found most of the information about these mysterious lights in the article. The article have some photos to add to the information. It is worth reading article to know how much versatile is the world.

For some people (including me :)) the noise is a kind of disturbing thing which needs to be turn off. Some senseless sounds often does nothing but to adding to the sound pollution. We are however going to talk about an article from July 2016 issue of Safari which is focused on the species which possess high pitch sound. Most of us know that the sound is measured in Decibels (DB in short). This article talks about the following species:

You will definitely enjoy reading about these noisy animals 🙂

In 1965, Pakistan attacked Dwarka through Naval forces. Indian Navy was however commanded to not to retaliate, for unknown reason! These things didn’t went will with many Navy officers, including Vice Admiral Bhaskar Sadashiv Soman. Later on an operation named Operation Trident was planned and executed.

There is a very detailed article about this operation. The article also talks about the background, i.e. the sequence of actions which was responsible for this operation and how it is planned and executed. Definitely must read article.

We love reading this section because it tries to answer maximum questions from curious readers. This time we found answers for some of the following questions:

The super Quiz section answers 10 interesting questions. However we think it is better for you to explore them in the magazine itself.

One of the most important article of the magazine is about the weapons used by special forces of India. the article starts from the last cover page and is very detailed. The weapons of various category (from sniper rifle to close combat pistols) are talked about nicely with technical details. Definitely worth to read article.