Posted by: Editor2 November 29, 2022 in Books, English Leave a comment

We love reading thrillers. Especilly the ones with a substance.

In our quest to find quality books and promising authors we found Mainak Dhar. Reading a book penned by him was always an interesting experience. What we love the most about his work, is, it is not limited to a single genre. Though his most of the books have thrills, actions and mystery as core ingredients, they belongs to differnt genre. Here are some of his books we’ve got a chance to read and share our review about.

Started as a kindle book series, “7even series” is an interesting one. It is focused on the life of an Indian Army veteran and a sniper. It seems to be a series with 7 books. Here are our reviews for the first two books in the series.

A while ago, we found the third book in the series – Sniper’s Quest available via Kindle Unlimited program and we grab the opportunity to read it.


And, here we consolidate our unbiased views and review for the same.

We consider cover page as an interesting aspect of a book, because, it is responsible for the making the first impression of the book, as acts as a gateway to the virtual world explored within. Many a times the cover page intrigues a casual browser to pick a book, possibly explore its blurb and eventually buy/read it. 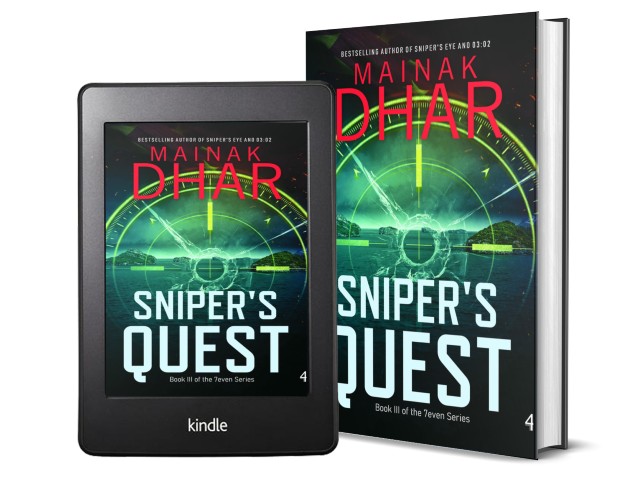 As you can see the cover page of this book is attractive enough to lure a browser.

Let us take a bird’s eye view of the book plot.
Aditya and Zoya are living a “normal” life with Aman – an apple of their eyes. And, it is special for Aditya and his family, as based on his background and quests in the past, leading a “normal” life is not only unusual, but unexpected too. And, they wish the life goes on in the same way.

But, fate always has its own way to play with you, especially, when it is not expected.

One day Aditya was called in to go for a trip alongwith a government official. It was planned as a formality trip where he was merely required to be present. During the trip he found some people and some detailes that shocked him.

A lady was found captured who tried to send a secret message. Checking the authenticity of the message was a challenging task, and working over it, well it may lead to a lot of consequences. But, how can Aditya leave a laddy in distress alone? And, when he and his family is targetted, he would be out of bounds, right?

There are so many twists and turns in the story which better be explored by reading it rather than talking about it.

The book keeps the adrenaline rushing in the readers’s mind during action scenes, elaborates emotions at the right time, has sarcasm and humor entangled in dialogues, making it a complete masala thriller you will enjoy reading.

We love to keep spoilers at the bay, wherever possible. That’s why we didn’t talk about the book plot in much details. To elaborate various aspects of the book, I would quote some lines from th book, and they might include some spoilers. So, please take forward your journey with that consent.

The good thing about the book is, it works completely fine as a standalone thriller also. So, the readers’s who hadn’t read first two books in the series will not find themselves lost in the story. Of course, there are references and continuity, but not knowing them will not affect your reading experience much. And, I think for the author, it is a challenge. Mainak scores with flying colors here.

Another aspect of the book is relatibility with the characters. As a reader, one loves to see the real references in the fictional work he is exploring. Not only, some shades of the prime characters, but also, the side characters and some “mere mentions” (eg. Varsha Singh and her channel ICTV) also reminds you of some real life persons/entities :). And same we can say for the character of Ajay Gopal, the National Security Advisor to the PM; General Subir Singh, the Chief of Army Staff; and others.

Introducing a character is always a challenge for an author. It is not just about revealing his name and/or location and job function(s), but it also include various attributes of the same to be mentioned. Sometimes you require number of paragraphs or even pages to do the same. Sometimes, a line is enough. For example, in this book we found the following line:

If the sniper didn’t get him, the Americans would. So Ghafoor had cashed in on old favours and moved to Dubai. Here, he was known as a businessman called Faisal.

The pigeon didn’t need the weather report to tell it just how hot it had been over the last few days, and neither did the man lying under the blanket.

An interesting wordplay! The author here actually refers to the current situation of a sniper who took position to hit the bull’s eye. The author describes that it all look good on a film screen, but in real life, thees jobs are not a fancy experince! Here are some lines from the book in the same regards:

The author is good at creating suspence around the words. For example: “Operation Lotus” will keep reminding you about a very important mission. It is mentioned like a character. A character’s thought process, his likes/dislikes, beliefs and political admirations; plays an interesting role in a person’s life. It would not be wrong to say that it influences his/her choices. Here is whaat the author captures for a character:

He was a devout Muslim, and his father would have told him that no man should judge anyone so harshly as to justify taking their life—judgement was Allah’s prerogative.

When working as a team, as buddies, especially during challenging times and/or in armed forces, leads to stronger relations. Even stronger than blood relations in some cases. Here are some interesting lines exploring various feelings, sitiuations, attributes, comradarie and other stuff in the same aspect:

We had found references of people with combat skills, who are part of armed forces or associated with law and order situations are deceived by the political authorities. Of course, not in all cases. There are some exceptions. And, such references are bluntly made in various books, movies and TV Shows. Why then they keep themselves fighting for the cause? Well, probably answer can be in the follwing lines:

Since the first time I’d put on a uniform and slipped into the night with my brothers to put ourselves in harm’s way and to do harm to the enemies we were directed to kill, I had come to realise one simple truth—old men sitting in their comfortable offices played politics and games of power, but it was young fools like us who did the bleeding and dying.

I chuckled as I imagined spies and terrorists of all hues bumping into each other on dark web message boards and forums. Did they have handles they could recognise each other by? Did they form friendships? Did any of them ever meet there and fall in love and then discover they were tasked to kill each other? I’d let Bollywood develop that line of thinking further.

If I need to pick only one line from the book, possibly I would settle for:

Bravery did not lie in physical acts of courage or not being afraid to die but in coming to peace with the choices you made.

These quotes must have give you a fair idea about the quality of writing in the book and whether it meets with your likes.

Layered characters, revealing them (the layers) gradually over the course of the story and satire infused dark humor are the key takeaways for me.

For me, it is a worthy book reading experience.

Sniper’s Quest keeps the adrenaline rushing in the reader’s mind during action scenes, elaborates emotions at the right time, has sarcasm and humor entangled in dialogues, making it a complete masala thriller you will enjoy reading.