Mainak Dhar is popular for his Thrillers. He has a day job to do, but, his passion for writing keeps him finding time for the same. Inspired by his father M. K. Dhar, he keeps exploring thrilling stories. Usually, “love for the nation” is the theme of his books.

Recently he came up with a novella named In Enemy Hands. Actually, it was written as part of Amazon’s pen-to-publish contest. It is worth noting that the book is available only as a Kindle Ebook. We bought the book when it was available for an attractive rating during a promotion.

From our team I got a chance to read it, and here are my unbiased views and reviews for the same.

Let us start with the cover page.

As the cover page is responsible for making the first impression of the book it is meant for, it plays a very important role in a large number of the purchase and/or reading decisions. 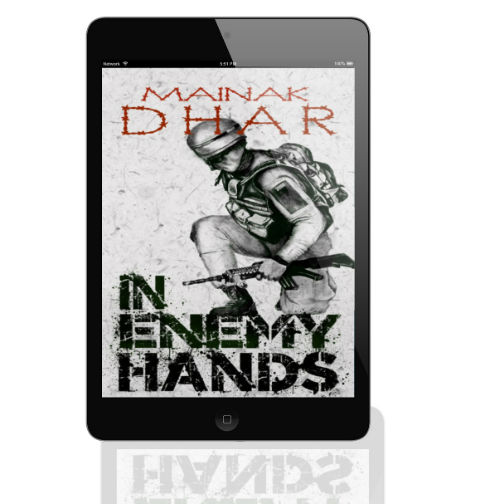 In Enemy Hands: A Novella By Mainak Dhar | Book Cover

A minimalistic (in terms of use of colors) yet attractive book cover. Puja Sengupta (cover designer) did a nice job.

This novella is distinguished in three segments:

As said earlier, the protagonist is an Indian army officer posted in the state of Jammu And Kashmir. One day he was on his regular duty rounds and in the josh of the moment he overlooked some of the protocols (or safety precautions) and something unexpected happened to him and his team.

While the terrorist attack was fatal for his team, he was survived with injuries. When he saw a young lady who was also there near the attack scene, he decided to help her reach her home safely. This is what Indian soldiers do. They care for the civilians more than their own lives. And, duty is the most precious thing for them. It is in their DNA to live a self-less life for the country and fellow citizens.

Will he (himself severely injured) be able to accompany the girl to her home? Will they both be survived? What was his mistake by the way? And, will he be ever again fit and fine to serve Indian army (considering that he might be survived)? What are the public and political aspects of this incident and its consequences?

All these questions are better get answered by reading the book.

While the story has emotional and patriotic aspects, what I like the most in the same is the way the situation in the state of Jammu and Kashmir is explored. The author didn’t shy away in exposing various agendas and the race of getting into limelight by various segments of the society.

I also like the way the commitment of a soldier towards his duty is explored in the book. They are the brave fellows who makes the country secure from enemies on both the sides of the borders. In addition, to explore the strong will power of the soldiers, the author also explores the weak moments. Some momentary decisions taken in a leap of faith may lead to the consequences unexpected. That is the reason why there are rules and protocols and they have to be followed religiously. As it is said, the security forces need to be succeeded in 100 out of 100 times while the terrorists need to be successful in their one attempt!

The way a soldier is trained to think is explored at various places in the book. Let me share one such segment:

Then I slapped myself. Get a grip, major! You are behaving like a scared, hurt civilian.
…
Most of all, focus your mind not on what had happened, or on what you might have done differently, but on what you could do now to get back safely.
…
I knew that there would be time later for regrets, time for nightmares, but for now, I needed to get my shit together if I wanted to last the night. …

Mainak is good at writing thrillers and exploring scenes. The way the places in the state of Jammu and Kashmir are explored is interesting. The place has fantastic natural beauty and rightfully called as the heaven on the earth. However, this heaven is hit by terrorism (both physical and intellectual) and is a tough place to live at. The way the security forces work, the way some local citizens consider them as friends and some consider them as outsiders and enemies; shows two sides of opinions. The author explored these aspects quite realistically.

What I found good in the book are strong characters. The gender or the professional position of the character doesn’t matter much. The author has given them the required footage in the short story. Even the protagonist has his own limitations and vulnerabilities. But, it is his will to learn from the mistakes and bounce back with a positive attitude and courage, makes him the hero. I think most of the readers will relate to the climax (in terms of the behavior of the people from various fields and statures) and will enjoy reading it.

It is not easy to explore the thought process or psyche of a person caught in a tricky situation and is almost bumping between life and death. The author has done it nicely along with the exploration of war-techniques. Here is an example:

It may have been dark but when you hunt others for a living and are in turn hunted by them, you learn to use senses beyond just what you can see.
…
I got the sicky sweet smell of blood, of death.

It also conveys some fantastic advices that are applicable in all the aspects of life:

Perhaps both of us were realising that we had a lot we disagreed about, but if we wasted our energy arguing, we would probably never make it to safety.

And, here is one more:

I would be lying if I said I was not afraid of death. However, I also said that being afraid did not make you a coward, it only made you human.

Overall, a short, interesting and realistic (of course, the story and incidents are fictional) thriller set up in the state of Jammu and Kashmir.

If you love reading thrillers you can definitely go for this book. There are promotions going on for this novella periodically (and we keep sharing them on our social media handles), so keep an eye and you will find a fantastic deal to buy it.

Previous: Long Road to Mercy by David Baldacci | Book Review
Next: An Interview With Pankaj Giri – The Author Of – The Fragile Thread Of Hope