Reading books by Mainak Dhar is always an interesting experience for me. I got to know about his books a long ago while exploring online bookstores and eventually I gave one of them a try. Then, the quality of his writing proved its own metal and since then, not only me but any of our team members don’t miss a chance to read his books.

Since shared our review for Sniper’s Eye which was/is meant to be Book 1 of the 7even series, we were curious to explore its next instalment.

Sniper’s Debt continues the fictional tale of Aditya and Zoya along with many characters including Aman from the point forward. Of course, it took us longer than expected (to get a chance to read the book and share our review for the same), but it was another interesting read we have had.

We strongly believe that a book should not be judged solely based on it’s cover page. However, we, human beings are attracted towards beauty and thus it is quite natural to pick a book with an attractive cover page. Of course, thus it is obvious that large number of book purchase and/or reading decisions are found influenced by the attractiveness of the cover page. 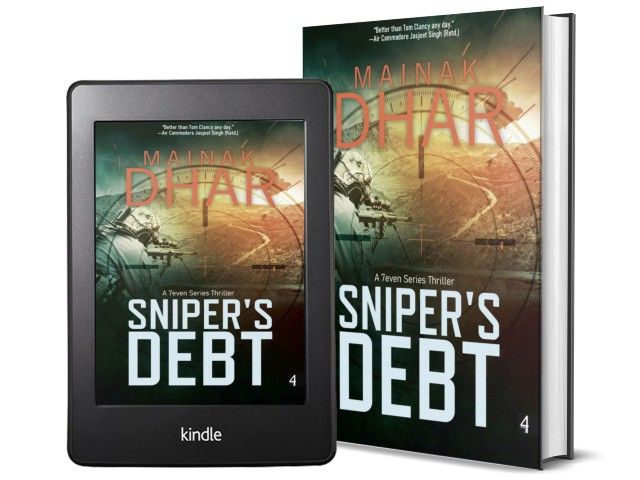 It is obvious to find a sniper rifle’s telescopic marker view on the cover page. We see the terrain of a dry and hilly areas (as a representation of areas of Afghanistan). A flying airplane and other elements make the cover page richer with details. The bottom area of the cover page is dark and the book title is in its contrast.

A cover page that could have been even better, but moderately impressive for sure.

The story continues after a few years of the incidents happened in Sniper’s Eye. Major Aditya Ghosh is now married to Zoya and they are living the “normal” family life. They are blessed with a son whom they named Aman. The name is very special, of course. If you’ve read “Sniper’s Eye”, you can get the connection.

They are flying abroad to have some peaceful and joyous time. But, fate has something unexpected planned for them. Their flight got hijacked! An US armed forces veteran tried playing brave and smart which lead him to met with his death. Due to presence of the family, Aditya was vigilant and was thinking logically.

The flight was taken to a barren hill in Afghanistan and the hijackers took some passengers at a different place! And that lead to the separation of Aditya from his wife and son!

Will they be able to see each other again? What are the challenges they are going to face individually? And why the book is named as “Sniper’s Debt”? You can get the answers when you read this gripping thriller. And in this journey you meet Aditya, Zoya, Aman, Aman (no it is not by mistake I wrote this name twice), Larry Murphy (US Army), Captain Wilson Smith, Major Aditya Ghosh, Arif, Khalid, Aman, Gul Mohammad, Karzai, Rasool, and others. And yes, Late MK Dhar makes a cameo too.

Do you love thrillers set up in International canvas? If yes, then reading this book is a treat for you. The way the author connects the dots with the previous book (Sniper’s Eye) is interesting. The way the canvas is set up in Afghanistan (and introduces readers to places like Nangarhar province and others) works positively for the book. The author’s detailed exploration of the terrain, people, livelihood and circumstances in the area is amazing. It shows the detailed research work the author has put into. The way the story explores a connection of the incident to US is also worth exploring.

The book starts in an interesting way.

You know your vacation in Paris won’t end well, when a guy sitting behind you tries to be a hero and end up dead.

Mainak is good at exploring characters and their attributes. And, not only the prime characters, but also, the small (in terms of length) characters are elaborated nicely. Be it the elder village person (in Afghanistan) or a young adult soldier. Even the US armed forces veteran that appears for a very small time, remains with you. The author doesn’t forget to pay tribute to the worthy characters.

The poor man had died because he had tried to do the right thing, to try and live by the code of the warrior he had lived for all his life.

A reader cannot connect with the character if he/she is not introduced properly. The author makes the appearance of these fictional characters in the virtual world visible to the reader through his words.

… He was tall, almost as tall as my six feet three inches, and while he looked American or European, his skin was weathered and dark. Not the kind of tan you get from a beach holiday, but the kind you get from spending endless days in hostile terrain and scorching weather for years on end.

And the same is true when he explores a six months old kid.

At just under six months, he was a bundle of restless energy, forever flailing his arms and legs, apparently able to get by without much sleep and with no seeming consideration for the zombie-like, self-deprived state he had reduced us to.

The conversations also remain faithful to the characters involved. For example:

Did my time in ‘Nam during the last couple of years…

If you’ve watched a lot of war films, you may connect the dots here. I also like the way the trained mind does the psychic-analysis of the other one.

Normal, terrified hostages didn’t comment on the training levels of their hijackers.

And, the characters to ask questions about advancing technologies as well!

Could they get 3-D printed guns in through airport security?

During challenging times rather than being emotional, being rational is more important. If you want to win a war or overcome a situation, you have to be at your best. Just letting your emotions overcome your actions doesn’t prove to be helpful, it is otherwise in fact. Sometimes, even the best mind needs this to be reminded. And, in this book, you see one character help the other remembering this lesson.

… We go to war, but we do so on a full stomach and with a plan. We go in informed not blind.

And, to remain sane during tough times, a person needs to have sense of humour. Probably that’s why we see a dose of sarcasm in most of the James Bond, Arnold Schwarzenegger movies :). The author, in this book, says:

…keeping your sanity and retained your sense of humour when everything was going to hell was what kept soldiers alive and gave them an edge.

Major, the only sure thing in life are death and taxes, but in Afghanistan, even the latter doesn’t always hold given how little the government controls.

The author also knows how to elaborate brutal situations and yet giving the due respect to the characters they deserve.

His death was his last act of heroism and defiance.

In the war (of any kind, not all of them are between armies of two or more opposing countries), sometimes situations are not in your hand. Keeping calm and go with the flow is the only option remains for you then. The author talks about this tough situation in a simple manner.

Sometimes when you have nothing else to do, that is the best you can do. Die as well as you can.

I found some explanations amazing in this book. They hooked me while reading them. Here is one example:

His face was lined with wrinkles that looked no less deep than the valleys surrounding us.

In real life, the situations are not always pure black or white. And the same is true with people also. For majority of them, you will find them in shades of grey. It would be an injustice to a character to depict it a black one, without knowing his/her background and/or acknowledging his/her positives. Of course, the negative actions cannot be justified, but, it doesn’t stop you from being rational, right? The author does the same with his characters. Talking about a character, he shades lights on some of his (the character’s) attributes:

A man, who did not justify or rationalise his choices, but took ownership for his actions and was making amends for them.

If I had to pick a single quote from the book, I would probably settle for the following one for being it realistic yet inspirational.

Bravery is not about not being scared, but about being able to keep going in spite of how afraid you are.

From the quotes referred about you must have got a fair idea about the writing style and linguistics of the book, in addition to get a glimpse of how characters, situation and incidents are elaborated. It definitely helps you in deciding whether the book suits your likes or not. Of course, there are things that I need to skip talking about in order to avoid spoilers.

A fantastically written sequel to Sniper’s Eye. The book can be read as a standalone also. If you love thrillers, you will find it even better than some of the international bestsellers also.

An Interview With Mainak Dhar | The Author Of – Sniper’s Eye