The perks of being a book lovers include your exposure various virtual worlds and knowing about and often connecting with, its creator. We (all – Thinkerviews – team members) consider ourselves fortunate for the love of reading implanted in us at the very early age. And, thank our elders, parents and grand parents for growing us in a such a fantastic manner. We will remain indebted to them, forever.

Alice in Wonderland is a fantastic story and kids from many countries across the world are familiar with it. Can you imagine writing a dark, Sci-Fi, young adult thriller seeded in the same? Well, Indian Author, Mainak Dhar did it. He named the book – Alice in Deadland. And, the story has so much scope of exploration, that the author eventually wrote two subsequent parts of the same, making it a trilogy!


Today we are going to talk about the first book in the series.

Of course, I will try to avoid as many spoilers as possible in the book plot exploration and while sharing my views and reviews for the same, please read with a consent, as some of them are inevitable. 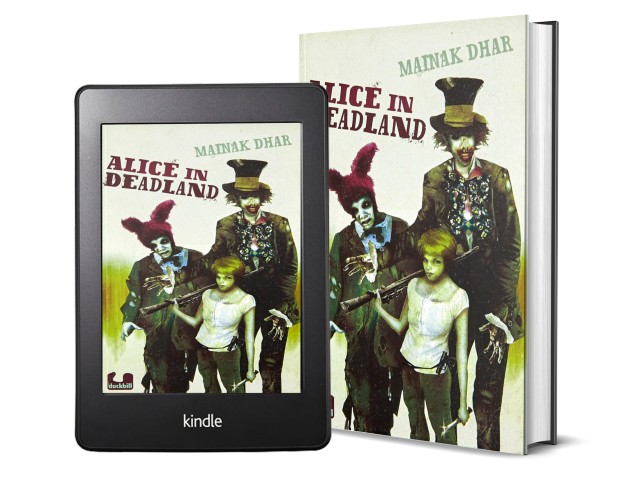 As you can see, this moderately good, not so appealing cover page shows illustrations of Alice and Biters. You could have imagine Alice in a super-hero kind of a costume and might be disappointed to see her illustration. Same way, you may have imagined deadly biters but found weak, fragile and zombie like creature, right? Well, the area and environment where these characters belong, surviving is a challenge. So there is no scope of keeping one’s self presentable. Even finding proper food became a challenge for them all. So, the illustrations are faithful to the characters. 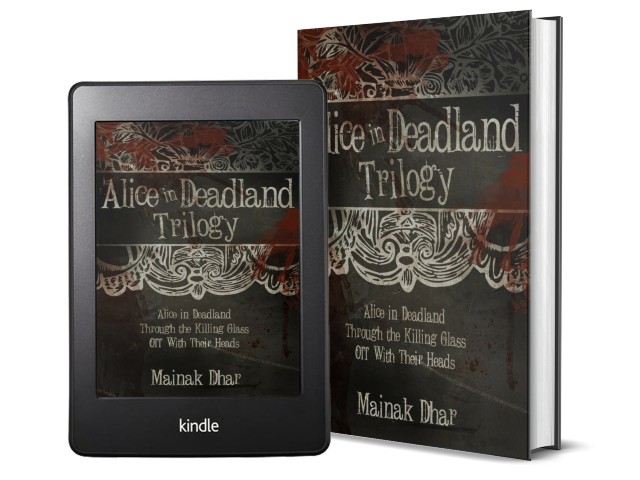 Later on, all the three books in the series are published as a Trilogy. And, here is the cover page for the same. Hugely resembling the cover page of book set for many popular sagas, this one is humble and not so appealing.

Overall, the cover pages could have been more attractive.

Once upon a time in future… The world is no more what it is today (or in the past from the story timeline’s perspective).

Humans are living in small settlements. Their main fear is getting bitten by the Biters. Once a Biter bit you, you are converted into a Biter. And, now you are looking for humans to bite! But, why the Biters bite? And, why some humans turned into the first lot of Biters (eventually adding more and more to the group)?

Is it a disease? Is there a vaccine for the same?

There are brave fellows leading various dispersed sects of human civilization to keep them away from the harm’s way (or Biters’ way). Notably, there is a world wide armed force helping humans to keep them protected from the Biters and help them during the tricky situations.

Alice, a very young girl lives in one such group or sect with her father. Her father is the leader of the group. The kids in the group didn’t get a chance to have normal schooling or even studying! Their only priority is to survive. And, thus, their parents give them physical training at the very early age. Alice is a very brave and tough girl who is admired for the intelligence at her age. She cannot read/write much but she can fight well, at least for her age.

His father believed the world wide armed forces have their own agenda and the kids or youth taken by them to be part of the army never return. They are helping the human beings to survive, but by making them their slaves. And, they have support from the Chinese armed forces and government. He doesn’t trust them at all.

One day, when Alice was wandering, she saw a rabbit like biter leading a group swiped away in front of her. She go curious and to find the door to the possible underground tunnel she has visited the site. And, before she can think of anything, she fell in the hole and landed into something dangerous – a deadland!

Will Alice survive? Well, is survival even possible? What is this network of underground tunnels? And, how many biters are using it? Who is the leader of them all? Is there a conspiracy against human civilization by armed forces, as Alice’ father suspects? Well, you can explore this thrilling tale and find answers to many of your questions :). During this reading journey, you will meeting Alice Gladwell, Ashok, Jeevan, Naveen, Nikhil, Satish, Arjun, Sheila, Swapnil, Vivek, Rajiv, Dr. Protima Dasgupta. Colonel Dewan, Major Balbir Singh, General John, Hatter, and others…

The book fantastically tells a dark utopian Sci-Fi thriller rooted in a kids’ story! The author must be appreciated for the wild imagination and giving it a body of words. From Alice to Princess to Rabbit eared Biter to the rabbit hole and the underground world and the princess living there, the author connected the dots quite well.

The way he has imagined the future, especially the exploration of how the greed of some human beings resulted into the disaster for the entire mankind, is relatable. The power hungry people and their quest to autonomously rule the entire civilization is explored in a believable way.

The base storyline and strong characters are at the backbone of the story. While exploring the future world, underground parallel world, remains of what we see as a society today, the technology powered future battles and the psyche of the people living at the different banks of the society is something every reader will enjoy reading. At one place the author says:

Man had proven to be the most jealous of lovers, preferring to destroy the Earth rather than give her up.

Here is another quotable seciton:

That’s always been the problem with humans. You take anything you fear and cannot understand and make it an object of hate. So much easier to hate and destroy than to seek to understand.

What I like the most is the way the characters are built. They are strong and having some great skills and qualities, yet they are vulnerable. Here are Alice’ feelings when she dropped into the underground world:

Now, Alice thought, she had perhaps got more thrills than she had ever bargained for. She was trapped in an underground Biter base, with no apparent way out.

And, that is what we see in real people! Painting the characters black or white is easy but shading them with realistic grey strokes is tough. The author did it nicely.

The author introduces us to various characters in an interesting way like:

My name was Protima, though nobody has called me by that name in a very long time. In our world, I guess I am considered the Queen …

Here are some examples of how effectively the “unknown” sides of the characters are explored in the book:

The book has some fantastic one-liners, here are some of them:

The book expresses some situations in lesser words even more effectively. For example, the tragic situation of getting bitten by a biter is represented as:

The author also explores the attempts of various sects for settlements and how they didn’t succeed beyond a point, as:

This is what we human beings crave for. Survive and having a not-so-complicated, peaceful and blooming life. In the same perspective, we often surrender to the situation. Here is one more quote in the same regards:

When people are scared enough, they begin to accept any form of tyranny because unquestioning obedience to unknown masters is better than facing known dangers.

Of course, there are many war scenes, various duels, exploration of unknown territories, fight battles and other thrilling moments explored in the book. The way they are elaborated is the USP of the book. Here are some spoiler-free quotes in the same regards.

The book also conveys an important message: If the human civilization will be in danger due to the actions of some bad humans, the light of hope will also be blossomed from torches of good humans. And in the same regards, here is a line from the book:

My name is Alice Gladwell. They call me the Queen of Wonderland.

The father-daughter bond, the friendship, the doing-greater-good attitude,… and more such positive sides of human behavior is also there is the book.

So, for me, its neither just a thrilling Sci-Fi, nor a young adult adventure. It is a complete masala entertainer with exposure of humanitarian works, relaying a meaningful message.

I am sure that the quotes referred to above, must have given you a fair idea of the book, quality of its writing and whether such works attracts you!

I like reading this book. If you love exploring thrillers weaved with many elements like Sci-Fi, fantasy fiction, utopian saga and adventures, with a little dark shade; this book is for you.