Books are nothing less then gems. They faciliates a gateway to the virtual world where fantsaies prosper.

Sometimes they lets you witness the truith actually triumph over the lies and wrong. Sometimes it provides you an escape from your day to day troubles. Sometimes they tickle your “little grey cells”!… It is amazing to experience what a company of a book brings with it.

Popular books inpsire creators to explore the visual world of the word penned down on a paper. And, we see a lot of books adapted into Movies, TV Serials and now Web Serieses. James Bond (novels by Ian Flaming), Harry Potter (books by J K Rowling), The Lord of The Rings (by J R R Talkien), Gamees of Thrones (books by George R R Martin), Poirot (books by Agatha Christie), Sherlock (books by Sir Arthur Conan Doyle), Twilight (books by Stephnie Meyer), Bharat Ek Khoj (based on a book – Discovery of India, by Pt. Jawaharlal Nehru), Jason Bourne (books by Robert Ludlum and Eric Van Lustbader), books by John Grisham, Marvel comics adaptations, recently released Wheel of Time series (based on the books with the same name)… the list is overgrowing.

Sometimes, the reverse also happens! A TV series / Movie become so popular that people wants to explore the fictional journey of those characters, even further. Sometimes the same author is roped in to continue to the story in the form of a script (or sometimes another author is approached), like the stuff happened to House Of Cards. Sometimes it happens that a film or TV series inspires author(s) to write the fictional incidents before or after what is elaborated in the respective work. Castle – is one such popular TV Series.

Featuring a female detactive, the series introduced Richard Castle as a fictional author who accopnies the investigation team. The charming persona of the actor playing the same, attracted viewers so much that Castle ran for X seaons. Then started coming books penned by Richard Castle. Obviously, it is a ghost name, as Richard Castle is a fictional character.

We’ve read 3 short EBooks in the Derrick Storm series by Richard Castle and share our views for the same. Here are the quick links:

And then came Nikki Heat book series. Nikki Heat and Jameson Rook, more or less represents the main characters from the Castle TV Series. Eventually the identity of the author of this series is revealed and we know that these books are written by – Tom Straw.


Today we are going to talk about Heat Wave, the first book in the Nikki Heat Book Series.

Being a gateway to the virtual world, explored within, the cover page is responsible for making the first impression of the book. It can highly influence a casual browser to pick the book, read the blurb and eventually buy and/or read the same. 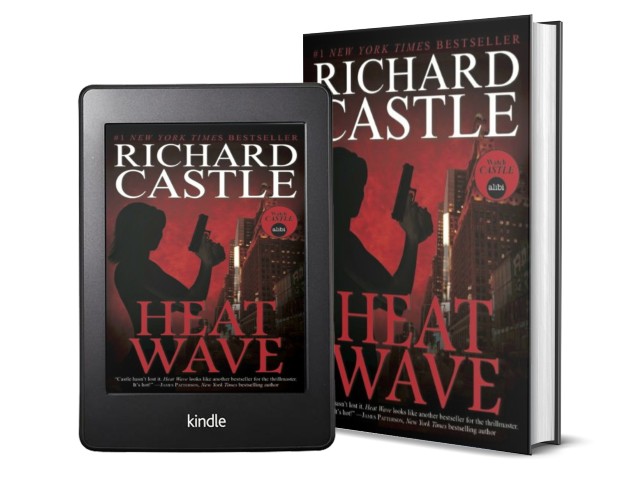 The cover page of this book is designed with abstract art. Dominating red color sets up the environment of a crime thriller as well as representing the heat wave. The black illustration of Nikki holding her weapon in a James Bond like striking pose in the backdrop of red color, looks appealing, but not much.

Overall, an interesting cover page that could have been better.

In Manhattan, New York, a real estate tycoon meets with his death in an unfortunate event. It doesn’t stop there. His young wife survives the attack. Parallelly, there is a heat wave grabbing the city into its clutching and the situation gets worse. The diseased business tycoon found to have a luxury mansion. The mansion is decorated with costliest artworks. A confidante of the diseased tycoon who used to take care of all his financial stuff, keeps doing the same. It is also discovered that the diseased fellow own a vacation home at a distant place.

At one side, the heat wave keeps getting more and more suffocative, dirty secrets of many characters keep revealing and the case takes various turns.

The in charge of the investigation is young, fit, brave and intelligent detective Nikki Heat. A famous and charming reporter Jameson Rook has used his connections to get himself acquainted with team Nikki Heat. He want to observe the detective work first hand, and report the same. Of course, Nikki was not happy with this situation, but, she had to cop up with it.

What happens at the end? Will Nikki-James get along together in amicable manner? What are the closets the investigation is going to find in the cupboard of various characters?

First thing first, if you love reading thrillers or police procedural, this book is a worthy choice.

The author got many things right, and obviously, that works in favor of the book.

The book title is also very meaningful. Not only the plot has a “heat wave” at the center, but it also gives you a fantastic “wave” of the feamle protagonist – Nikki Heat. The author has put in significant efforts in developing almost all the characters. Of course, some of them are at the center stage, but those who are having less “lime light”, are also elaborated properly.

Those who had seen “Castle” or some of its episode will, obviously, be able to draw parellels amongs Kate Beckett and Richard Castle’s characters (to Nikki Heat and Jameson Rook, respectively). But, the book adds more to them.

Nikki is a brave, young and ferocious detective, but she has her vulnerabilities too. Same for Jameson Rook and others. And, that makes these characters real. As per my opinion, readers will be able to connect to these characters due to these “humane” attributes.

It was always the same for her when she arrived to meet the body. After she unbuckled her seat belt, after she pulled a stick pen from the rubber band on the sun visor, after her long fingers brushed her hip to feel the comfort of her service piece, what she always did was pause. Not long. Just the length of a slow deep breath. That’s all it took for her to remember the one thing she will never forget. Another body waited. She drew the breath. And when she could feel the raw edges of the hole that had been blown in her life, Detective Nikki Heat was ready. She opened the car door and went to work.

See, how detailed the setup is explained?! Reminded me of scenes written in quality murder mysteries. And there comes the humane attribute of Nikki’s character.

Heat could have made it easier on herself by parking closer, but this was another of her rituals: the walk up. Every crime scene was a flavor of chaos, and these two hundred feet afforded the detective her only chance to fill the clean slate with her own impressions.

I know to you this is just another crime scene, right? But for that family in there, it’s the only one they’ve ever experienced.

And, as said earlier, it is not only the female protagonist whose attributes are elaborated.

Lauren Parry was a marvel. She remembered every autopsy the way Tiger Woods could tell you every golf shot he made in every tournament—as well as his opponent’s.

Of course, you will find many lines referring to “policing”. Here are some interesting ones:

Try listening. This is police work. Killers don’t walk around with bloody knives on them, and the home invasion crews don’t dress like the Hamburglar. You talk to people. You listen. You see if they’re hiding something. Or sometimes, if you pay attention, you get insight; information you didn’t have before.

The reluctance of Nikki about getting accompanied by a reporter is clearly shown:

The job was hard enough if you were doing it right. Add a reporter with a mouth playing make-believe cop and your day just got a little longer.

This is where you and I come from different places. You write these magazine pieces, you’re all about selling the image. I’m all about looking behind it. I’m frequently disappointed but seldom wrong. Behind every picture hides the true story. You just have to be willing to look.

And truly, as Hercule Poirot says, “the little grey cells”, does a remarkable work that requires ovservational and analytical perspectives. The book has lines like:

Nikki had seen it many times where the urge to help or to take revenge forced good people to make bad choices.

They are philosophical and realistic at the same time.

The author has added references to movies, books, contemporary world and other stuff to make the book more relatable.

This is what I call the Street Google. We are the search engine; it’s how it gets done.

Do you know Alfred Hitchcock?”
“Why, is he accusing me of the Great Train Robbery?”
“Somebody asked him once if the perfect crime had ever been committed. He said yes. And when the interviewer asked him what it was, Hitchcock said, ‘We don’t know, that’s what makes it perfect.’”

The author is good at wordplays. It is clearly visible in various scene exploration, throughout the book.

They took the West Side Highway downtown, and even the river showed symptoms of heat strain. To their right, the Hudson looked as if it was too hot to move and its surface lay there in surrender, all flat and dozy.

Buckley turned his head away from Heat the way dogs do when they’re pretending they didn’t deliver the nearby turd to the new carpet.

Sometimes the best way to ask a question was not to ask it.

If I had to choose one line from the book, I would go for the following:

“No. And thank you for not touching my monitor. I never understood why people have to touch computer screens when they point.”

The author also comes up with interesting words/phrases like:

Some of the steamy scenes and scenes having brutal violence makes it for “mature readers only”.

Of course, there are a lot of story elements, scenes, dialogs and attributes can be talked here, but that will lead to spoilers. So, let me stop here.

Let me add a couple of things before we conclude. I like the way the fitness regime of Nikki is elaborated in the book. Same way, Rook is not only “good looks” fellow, he is very intelligent and humorous too. The satirical punches due to his presence, the “dark humor” by “Roach” and other elements gives you relief while exploring the tension-full story set up in the backdrop of “heat wave”. The book also explores the bond amongst the team, and more importantly respect for each other’s strengths – amongst the investigation team.

The research work done by the author for “white caller” crime is also a point require a special mention.

I thoroughly enjoyed reading this book. It is the right mixture of dark-light moments, murders, thrills, happiness, stress, anger, frustration, joy and bond of love; written for mature readers only.