Inspiring young readers with attractive and educating stories is one of the most interesting areas of popular fiction. Looking for such works, we recently came across a series by Australian author Jackie French, who is known for her ongoing work for promoting literacy for children. One of her famous quotes is that “A book can change a child’s life“, and it is so true.

As the author says at end of the book, she has come across lots of examples of women changing histories during her works. So, as a new challenge, this series is focused on girls who changed the world 🙂 and the first instalment is called Ming and Flo Fight for the Future.


We have reviewed a similar series lately, which also describes adventures of a a young girl, Enola Holmes, who finds an unconventional life for herself in England of Victorian times: 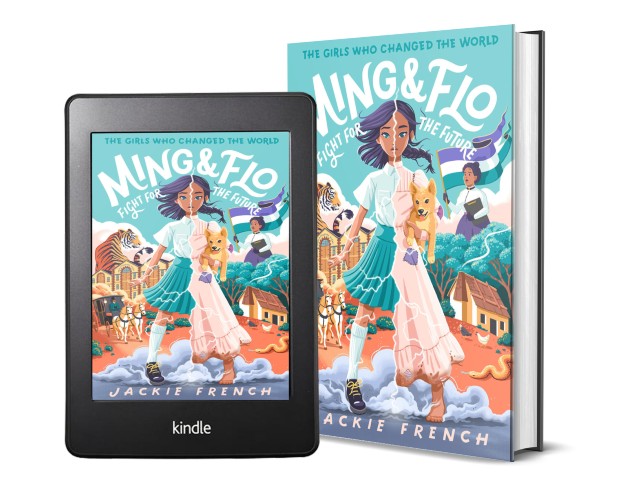 The book cover is quite attractive considering it is targeted towards young readers. Its vibrant and colourful and it shows us a young girl – split in two halves – each half dressed in clothes from two completely different centuries…

The background features exciting elements like a snake, a horse-drawn carriage, a tiger, red earth and tall buildings and a woman waving the flag of change, demanding rights to vote and more…

12 year old Ming Qong goes to school and very often finds herself daydreaming in some classes. She has a loving family including her brother Twan and quite an active imagination.

When attending a lesson about historical figures who changed the world, Ming wonders if there were girls like her who changed the world in past? Surely, there must be some? Her questions are answered by a shadowy lady called “Herstory”, who promises to show Ming the past via time travel. Excited, Ming can’t wait to arrive in a dazzling palace or an explorer’s ship changing the course of events.

But, she finds herself becoming Flo Watson – a girl of similar age as her, but living in Australia of 1898. Florence’s mother is of mixed ancestry – Chinese and Scottish. And when she married Flo’s father, they came to live in a farm. But, now Flo’s alcoholic father has deserted them, and Flo’s Mom dies due to snakebite.

Ming/Flo write to their mother’s sister. Soon, Aunt McTavish arrives and takes Flo to Sydney. On the way, Flo sees the widespread poverty, the demanding outdoors of Australia which only yield a few habitable areas and the blatant racism targeted against people of Asian heritage.

Aunt McTavish has strict ideas about how a young lady should behave and she starts telling Flo how to dress, how to speak, how to behave, etc. She is also reasonably wealthy and soon she sends Flo to teach poor children who are younger then her. Here, Flo meets Emily – orphaned, starving and homeless- and brings her home.

Flo discovers that her aunt also has a kind, generous soul and through her Flo and Emily learn about the suffragette movement in Australia and also the referendum that will make Australia one country, instead of a British colony.

Just as they think they have found a family and are making a difference, Flo’s father arrives to take her away. What will happen to Ming’s chance to make a difference and change the world? Will she ever make it back to her own time?

In today’s world, we have so many rights for women – right to vote, right to own a property, right to travel, etc. But not a hundred years ago, women could not vote, or do any of these things independently. It took a lot of efforts by lot of women around the world to give the young girls the opportunities to study, so they can have options to become professional women in their adult lives and lead similar changes for the next generation. Because whether it gets recorded or not, women have always made a big difference in the way we have lived – they ran households as well as empires and shaped the world as we know it today – along with men.

But there are still millions of girls and boys around the world, whose childhood is subjected to poverty, abuse and work from a very young age. They sometimes don’t even have basic health care. In some respect they live like the Australia in this book of 1898 – where they did not have electricity or modern transport and people living in far-flung farms suffered from draughts and worked really hard to make their daily living.

And so this book is a reminder of how fortunate we are to live in today’s world and to do our part towards making sure that more and more children get access to education and better quality of life.

The book also has another very important message about racism. While today’s Australia is a mixing pot of ethnicities, in 1898, people of non-European descent were not even recorded on Census sometimes. Australia does have to amend and atone for the racial injustices that took place in its past, and so does rest of the world. So the book also teaches young readers to be kind, to help others and not be cruel to people who are different from you, just because you may not understand their way of life.

The book is written in simple language and has funny moments as Ming becomes Flo and then learns to be a lady. How she misses food like pizza and sushi or is surprised that baths are luxury. I loved how she discovers Aunt McTavish’s soft and loving heart hidden behind her strict persona and finds a family after losing her mother.

In summary, a heart-warming, educational, adventure series with small books that will be just right for  young adolescent readers…