Exploring the various adaptations of the world of Sherlock Holmes stories by Sir Arthur Conan Doyle, we came across the book series by author Nancy Springer who writes adventures featuring Sherlock‘s much younger sister Enola. We have reviewed the first four books in this series here on Thinkerviews platform.

Continuing Enola‘s adventures is the fifth book called The Case of the Cryptic Crinoline.

I had a chance to read this book as I peruse the series and here are my thoughts for you on behalf of Team Thinkerviews. 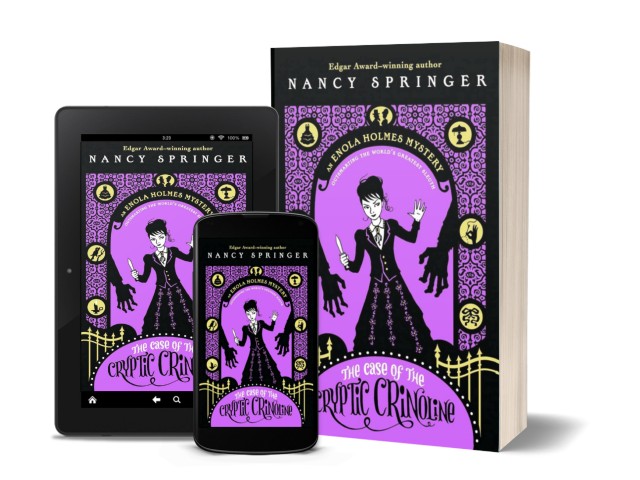 Enola Holmes – Book 5: The Case of the Cryptic Crinoline

The whole series has been illustrated with matching graphics on front pages and similar to the first two books in the series, this book also features a young, tall and thin girl attired in old-fashioned clothes in dark colours. The colour theme is prominently black, purple and yellow.

Enola’s holding her faithful dagger while monstrous hands form threatening shadows around her. The little circles around the doorway of this story hold a candle, a bird, an elaborate women’s dress, a brother and sister facing each other, an embroidery stich and a set of ribbons. As usual, all are part of the story and you will find the references to these as you read through the book.

This book opens with a brutal war scene in 1855, in a place called Scutari in Turkey. Young soldiers are perishing from their wounds, infection, malnutrition and infections, as their wives watch helplessly, unable to get any help. In this hellish place, the only beacon of light is a gentle, sweet-voiced lady who brings some nursing and comfort. But even she can’t stop Thomas Tupper’s death.

A few decades later, as Enola comes home in her avatar of Miss Meshle, her old and deaf landlady, Mrs. Tupper has something interesting to show her – a ransom note, demanding that she deliver her message or else. Completely clueless, Mrs. Tupper requests Enola to help her. Enola puts an advertisement in paper advising the sender that Mrs. Tupper has no message, never had one, and knows nothing of the matters.

Instead of resolving the matter, this seems to start a flurry of panic. Mrs. Tupper is kidnapped by rough-looking goons and her house is overturned. Enola comes home to find breakage and chaos. In an attempt to put the elderly lady’s room to order, she comes across an old-fashioned, extravagant dress with an elaborate underlay made of crinoline and decorated with embroidered ribbons. Apart from that, nothing seems to be out of place.

Revising Mrs. Tupper’s story of the time she spent in Turkey with her husband, Enola figures out who the gently caregiver was – Florence Nightingale. Searching for her, Enola finds that this lady is not only alive, but seems to influence all major decisions of the Government in spite of never having left her bed since her return from the war.

When Enola arrives to her bustling household and sends her a note regarding her current problem, she receives only a negative answer. With no more clues left, how can she retrieve her gentle landlady? The villains keep coming back to retrieve the message they think is somewhere in the house. And Sherlock has by no means given up on finding her, so Enola is running out of disguises and hiding places pretty quickly.

Will she find the mysterious message after all these years? And will she be able to protect both herself and her landlady from mistreatment and may be death if she fails?

After sorting out the messages delivered through a pink fan, Enola is back with yet another adventure. Author Nancy Springer continues the rhyming titles continues in the Victorian fashion as you can see and brings back the old-fashioned crinoline.

As the series continues, every book has to have a novelty feature that will keep the reader intrigued, so that it does not all become a too-familiar-tale. In this book, that factor is the Crimea war of 1855 and the legendary Florence Nightingale, who pretty much defined nursing for war time soldiers for future wars to come. Like every war, this one was also fought on questionable premise:

The Crimean War was one of the most confused conflicts ever undertaken by human stupidity: England and Napoleanic France, of all the unlikely allies, joining with heathen Turkey, even more unlikely, against the already-dying giant that had been Ottoman Russia. “Theirs not to wonder why, theirs but to do or die,” doomed men charging straight into cannon-fire for the sake of a godforsaken peninsula in the Black Sea: the Crimea.

The descriptions of the war, the callousness of the way life and death were held cheap and the absolute dependence of wives who followed their soldier husbands to war with all their household belonging is fairy accurate. As Florence Nightingale describes to Enola how her service was actually seen as intrusion:

The doctors and officers saw my presence as interference, and as a threat to their party-going, picnicking, polo-playing, horse-racing, high old good times. I had insane notions that the officers should spend their days looking after the welfare of their men, and the doctors should attend to the sick.

But as the author says, the way she has created Florence Nigtingale – a leading role model for women of her generation, who chose a life of service and then of recluse rather than following the traditional role model is somewhat of her imagination. It is true that she had reformative ideas and was a big influence in England as long as she lived, the way her house is portrayed here is interesting though imaginary.

Furthering the feminist narrative of the books is Enola’s visits to the Professional Women’s Club, which allowed women to rest and debate their ideas in the safety and seclusion of a civilised abode. A place like this is just right for a young girl, who tends to think logically rather then emotionally and has a wry take on established notions:

I also found myself contemplating with dark amusement the eighteenth-century philosophers, Alexander Pope and his ilk, who insisted that “everything is for the best in this best of all possible worlds” – in other words, if the baby dies, one must tell oneself that things would have been much worse had it lived; if thousands of orphans are starving, surely it is for some higher purpose, and -in my case – if I found myself hunted, on the run, unable to go home and sleep in my own bed, well, then, wasn’t it wonderful that I had somewhere else to go tonight?

For the adventure lovers, there is plenty here as Enola continues to escape her brother by jumping through windows on a tree, or brings her dagger out to confront a bully twice her size. While the code lovers have something to enjoy too. This time, Enola decrypts a code written in embroidery by linking its symbols to the Morse code!!

Enola of this book also is slowly coming to realisation that every person has a history e.g., her landlady has put a lifetime of suffering behind her to achieve some dignity even in her destitution. While Enola has been busy with her own problem and has barely had any thought about Mrs. Tupper’s life, she continues to care for Enola and shown Enola nothing but love and compassion during her stay.

So, enjoy this little adventure of the spunky and intelligent girl who embarks on a dangerous mission to save an elderly woman against all odds.