Exploring the various adaptations of the world of Sherlock Holmes stories by Sir Arthur Conan Doyle, we came across the book series by author Nancy Springer who writes adventures featuring Sherlock‘s much younger sister Enola.


Listen To The Podcast:

We have reviewed the first three books in this series here on Thinkerviews platform.

Continuing Enola‘s adventures is the fourth book called ‘The Case of the Peculiar Pink Fan’. I had a chance to read this book as I peruse the series and here are my thoughts for you on behalf of Team Thinkerviews. 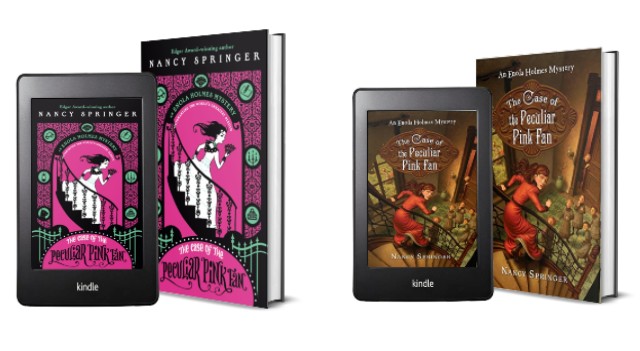 The whole series has been illustrated with matching graphics on front pages and similar to the first two books in the series, this book also features a young, tall and thin girl attired in old-fashioned gown – almost like a wedding dress. The colour theme is prominently black, dark pink and green.

She is flying down the stairs, holding a pink paper fan in one hand, with her hair streaming behind her. Like the previous books, the semi circle around her is featuring various objects from the story including a scary dog, a lantern, a pair of spectacles, a paper fan right at the top, a candle stand and a carpet bag that carries a lot of the heavy objects that Enola carries around. All these are part of the adventure of the pink paper fan and the readers can identify these as the story progresses.

Enola had been fairly battered in the previous adventure, but as we start reading this story, she is back on her feet and going about her life with her chin up.
She is in one of the public ladies lavatories of London, when a trio of ladies walks in – the youngest of them clearly under duress. Enola recognizes her immediately – it is none other than Lady Cecily, the left-handed lady who was abducted from her home and later rescued by Enola. It seems now she is abducted again, but by family members comprising of two elderly women.

Cecily is carrying a pink, paper fan and so Enola uses her own fan and the two silently communicate through language of fans. When Cecily is taken away again, she leaves her pink, paper fan behind. Enola decides to follow them, but when she comes out of the lavatory, she runs into none other than her brother Mycroft and in the ensuing commotion escapes him, but also loses Cecily.

Once at home, she goes through recent society periodicals to see what the rich and famous of the city are doing, and finds that a ‘Pink Tea’ is all the rage these days. The idea is that everything – food, décor, clothes, etc. – in such a party would be pink. So, Cecily must have attended such gathering where she acquired that fan.

As Enola keeps trying various ways to find Cecily – visiting her family for example – she also by chance runs into her brother Sherlock, who has been hired by Cecily’s mother to find her. They pool their information together and figure out that Cecily is being kept in a locked room somewhere, and is soon to be married off to her cousin. It appears to be a complicated family matter.

Will Enola find where Cecily is imprisoned? Can they stop the wedding and free her? And once Sherlock has found Enola, will he let her go?

After the case of the bizarre bouquets, author Nancy Springer has come back with yet another spunky tale. The rhyming of the titles continues in the Victorian fashion as you can see.

So what is new in this tale? Well, all previous books featured the language of flowers, and that is still featured in this book, but the author also brings up the language of fans. Like the language of flowers, this is also predominantly seen as part of the women’s world of those times, when young ladies were never alone and had to develop signals to communicate with friends and lovers privately, while in a room full of people at assemblies and parties. Nancy Springer makes the point yet again that knowing the women’s world and their ways led to success for Enola where Sherlock might be baffled. The strong female-oriented narrative still continues in this book as the unfairness of those times is highlighted through various remarks and observations by characters.

Although only fourteen year old, Enola continues to follow her courageous path, while telling us about herself with self-analysing observations:

I did not like nonsense stories; I wanted the narrative unfold with some degree of logic, much as life should. Although it did not.
Society-watching was a pursuit that, being a person of democratic convictions, I had scorned, up until now.

She sees the London around her with the same sense of amusement, and when she looks at its posh bits, she still sees through those:

Regent Street and its environs can be summed up in three words: glass, gas and brass. That is to say, oft-cleaned bow windows replete with finery illuminated by numerous lamps in the most resplendent of all possible surroundings.

Through Enola, the author shows us the world of rich and titled families of London, where marriages are made for social climbing and where status means more than personal values or happiness. Cecily’s father, her uncle, her aunts Otelia and Aquila are all representatives of this snobbish world that looks down upon everyone else and sees a young woman as a bargain tool more than anything else.

What I have liked in this series of books, is the way the author looks at London in hindsight and shows us what lived under all the gloss of being the mega city. As Enola roams the city at night, she sees the countless orphans, the night-soil pickers, the poorest of the poors scrambling to survive. She herself has a new disguise:

I had found another guise in which to roam London in the dark hours: I went as a midden-picker, that is one who scavenges garbage heaps for bits of rag (for the paper mills), bone (for garden – meal), metal (for the smelters), or food (definitely not for me). I wore a shabby skirt and shawl, walked with a rickety, shambling gait, and carried a battered lantern in one hand and a burlap sack upon my bent back. As a midden-picker, I could go anywhere without interference, for I exemplified thriftiness. Although propriety dictated that such an unsightly scavenger must steal in and out again by night, still only the most mean and stingy of households would drive such a hardworking representative of the “deserving poor” from their premises.

I like her wry, satirical tone all the way through the book when she reads through the society journals and muses on what ‘such and such’ is doing and wonders why anybody should care. Incidentally, not much has changed on that front in the hundred odd years. Those periodicals still tell you what’s ‘in’, how to be ‘trendy’, what to wear, how to make your hair glossy and so on 😊. If anything, we have taken it to a level beyond imagination of those times with millions of people tuning into such posts on digital platforms.

For the lovers of the cryptic and code-breaking bits, Enola comes across the ‘Mason’ cipher here and breaks it. She also enjoys composing some lyrical riddles to communicate with her estranged family.

I enjoyed this little adventure and you will too if you enjoy reading about curious things of the past and going on adventures with a teenage girl trying to make a life of her own.