Exploring the various adaptations of the world of Sherlock Holmes stories by Sir Arthur Conan Doyle, we came across the book series by author Nancy Springer who writes adventures featuring Sherlock‘s much younger sister Enola. We have reviewed the first book in this series here on Thinkerviews platform.

Carrying on with Enola‘s life is the second book called ‘The Case of the Left Handed Lady’. I had a chance to read this book and so let me share my thoughts with you on behalf of Team Thinkerviews. 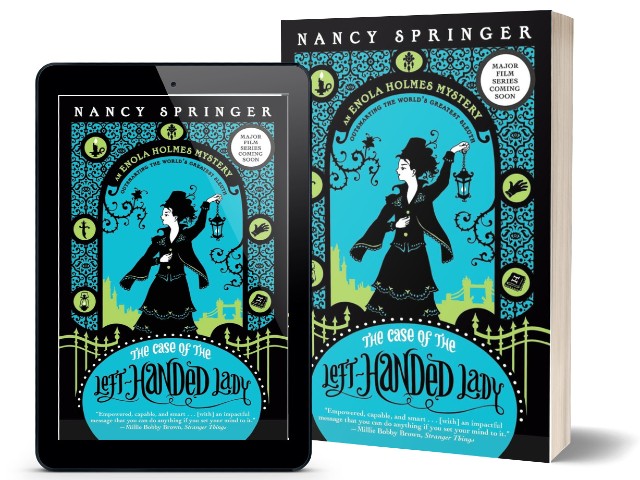 The whole series has been illustrated with matching graphics on front pages and similar to the first book in the series, this book also features a young, tall and thin girl attired in old-fashioned clothes and holding a lantern of the old design. The colour theme is prominently black, light blue and dull yellow – probably symbolising the dark world this girl is inhibiting.

When we left Enola at end of the first book, she had found herself a place to stay in London. In this book, she is in the same lodging place, staying as Miss Meshle. She also has set-up her office under the name of Dr. Ragostin – perditorian – who can find lost people and things. She is still trying to communicate with her mother through the cryptic advertisements in newspapers using the language of flowers.

Enola becomes interested in the disappearance of an aristocratic young lady called Lady Cecily. She visits the missing girl’s house and discovers her secret drawings featuring the poor people of London. She also interviews her friend Alexander Finch and learns that both Alexander and Cecily were sympathetic to the cause of the proletariat workmen of this world. Slowly the threads of this mystery are unravelling around Enola, but this also means she is getting dangerously close to a maniac.

Meanwhile, Sherlock Holmes has deciphered Enola’s messages and is trying to find her through the medium of same advertisements that Enola uses.

Enola’s attempts to find Lady Cecily puts her life in danger repeatedly. Not only she escapes death narrowly a few times, she also keeps encountering her brother in most unexpected places.
How far can she go alone trying to stop a criminal, find a kidnapped girl and staying out of reach of one of the great detectives of his time?

One of the first interesting things about this book is its title. Now most of us are naturally right-handed, but there are many people who are naturally left handed. You may know someone who prefers using their left hand. In fact, there are many celebrities who are left-handed and it is quite an accepted phenomena these days. But it was not so even a few decades ago. As right hand is considered the ‘good’ hand, the hand preferred during religious ceremonies and so on, a lot of left-handed children also were punished and it was common practice to try and get them to change to be right handed. This book highlights that this custom must have been common around the world, as the author shows us through Enola’s thoughts what a typical left-handed child would go through when growing up in England of late nineteenth century:

I doubt I myself would have taken such a viewpoint if it were not for the extraordinary freedom of my own upbringing. But having been raised by a mother who believed in letting growing things alone, I was imagining how it must have been for Lady Cecily: her baby fingers had been smacked when she tried to use the ” wrong” hand, toys taken away from her left hand and placed in her right, and oh, the scoldings. Her left hand might have been tied behind her when it was time for her to learn to print her letters. All through her schooling, her knuckles must have often been rapped. Or her left palm might have been beaten with a strap.

Continuing to build the background of the London as it was in Enola’s time, this time the author features the rising awareness amongst general public regarding the social and financial divides. Through the characters of Alexander and Cecily, we meet the young activists trying to emulate Karl Marx’ “Das Kapital” and create a movement for recognition of worker’s rights.

Here are some of the historic comments that the author uses when recalling the worker’s marches in London of those days:

It is in bad taste for people to parade their insolent starvation in the face of the rich and trading portions of the town. They should have starved in their garrets.

Had God decreed that three quarters of the populace shall live and labour in bone-skewing mind-stunting poverty, while a favoured few shall occupy their days by having their servants assist them in five changes of clothing?

This country is mad for valuing people according to their titles. Why should an idle so-called aristocrat be considered more of a gentleman than any thrifty, sober, industrious member of the working class?

And it is very easy to see how these thoughts would be common when a small percentage of the population wore ridiculously high maintenance clothing while a big percentage served them:

The hem of my long cloak and back of my even longer skirt dragged upon the city cobbles, indicating the social class of one who rode in carriages. A ragged little girl with a broom approached me; at my nod the child hurried to sweep the crossing for me, banishing from my path the muck of soot, stone dust, mud, and horse droppings that always coated the street.

These sentiments also bring to mind the thoughts I also had with the first book, that with hindsight we are able to see our past in a more comprehensive way. When Sir Arthur Conan Doyle was writing, he was writing about the world he inhibited and how he saw it. While the London of those stories was dark and gloomy, it didn’t quite bring to mind the image that paras like below do:

The day was gloomy enough already; although the clocks had just struck one in the afternoon, a lamplighter climbed his ladder, for with the London sky thick with smoke, fog, and soot it might as well have been evening. All over the rooftops of the city, chimneys stood like dark candles spewing smut. Workmen and cleaning-women walked past me coughing; someone would die of the catarrh today.

The author does tell us a little bit more about Lady Eudoria Holmes‘ character here with snippets here and there commenting on her love for freedom and suffragette movements as well women’s rights. But these ideas were still mostly ideas and reality was very different. We see how children in this world could work but had no real rights:

I was a runaway upstart of fourteen. True, half the domestics and mill-hands in London were my age or younger, and true, also, that any of us who committed a crime would be imprisoned, tried and hanged right along with Jack the Ripper should the police ever find him – but we had no rights, none, not even a right to the money we earned, until we turned twenty-one. Legally, at age fourteen I did not yet exist.

In spite of the realistic view of the era as shared above, the author does not shirk away from featuring some ghastly and otherwordly stuff similar to the narratives of the Holmes adventures, e.g. the references to Mesmerism which is kind of hypnotising someone to get them do your evil biddings, or the Dr. Jekyll vs Mr. Hyde personality transformation of the villain who turns into a monster with a wig :).

Nancy Springer also takes us on a tour of one of the very early versions of a ‘Department Stores’. While Enola’s experience until then is with small, individually fronted businesses, she is amazed by the sheer amount of goods and options presented by massive quantities of merchandise in just one place, but she also wonders at how it affect the people there:

I wondered what constant exposure to this place might do to those who worked here.Hatters went mad and painters became posioned; labourers in cotton mills grew stunted if they did not sicken and die; this “emporium” also seemed shomehow unhealthful to me. How might such a plethora of pretty things affect, if not the body, then the mind?

Enola’s life by no means is a picnic. She faces a lot of dangers on her own continuously and it is difficult not to admire her courage or forgive her for an ocassional lapse where she craves genuine friendship with someone. The most unusual and yet the most common thing that she yearns for still remains her independence though:

The greatest harm I could possibly suffer would be to lose my liberty, to be forced into a conventional life of domestic duties and matrimony.

I enjoyed this little adventure and you will too if you are looking for a sparkling girl trying to find a life for herself while doing her best to help others.