Exploring the various adaptations of the world of Sherlock Holmes stories by Sir Arthur Conan Doyle, we came across the book series by author Nancy Springer who writes adventures featuring Sherlock‘s much younger sister Enola. We have reviewed the first two books in this series here on Thinkerviews platform.

Continuing Enola‘s adventures is the third book called ‘The Case of the Bizarre Bourquets’. I had a chance to read this book as I persue the series and here are my thoughts for you on behalf of Team Thinkerviews. 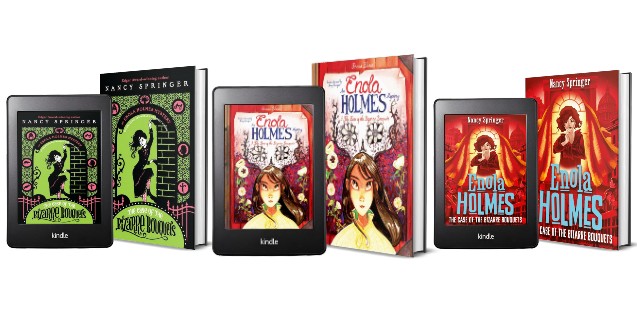 The whole series has been illustrated with matching graphics on front pages and similar to the first two books in the series, this book also features a young, tall and thin girl attired in old-fashioned clothes. The colour theme is prominently black, dark pink and fluroscent green.

She is trying to climb a vertical wall in an attempt to get to the roof. This image features an incident described in the book towards the end. You can see her exposing stockinged legs shocking for the times :-). Like the previous books, there are objects placed in the semi-circluar arch surrounding her featuring a candy, a rat, a wig, a bush, a figure with prosthetic nose and lastly, Enola’s faithful dagger. All these are part of the adventure of the bizarre bouquets and the reader can find references to these as the story progresses.

Not a stand-out coverpage for casual browsers, but a fitting one in the scheme of things for the fans of this series.

The previous adventure came very close to threatening Enola’s life and scared her somewhat. As a result, she tried to contact her mother, but was disappointed. At the start of this book, we meet her in her slightly depressed, sulking mood, as she has shut herself indoors for days in her lodgings in the not-so-salubrious East End of London. She has also had to go her charity work at night disguised as a nun, as her brothers now know about this disguise and are looking for her.

She comes out of this abject mood, when she reads a piece of shocking news – Dr Watson has disappeared. Enola is fond of the kind doctor and decides to visit his wife and help in finding him. To escape Sherlock’s notice, she settles on a disguise she has not used before – that of a beautiful girl, an opposite of her hook nosed, sallow, plain profile.

She visits an interesting shop called Chaunticleer’s to obtain make-up and wig. She also obtains false identity cards for Miss Viola Everseau. When lovely Viola comes knocking on the Watson’s door, Mrs. Mary Watson is all amiability and welcoming. The two get talking and Enola gets the background information she needs. But, her attention is caught by a strange flower bouquet residing with all other messages of goodwill in the room.

She manages to rent a room in the house across from the Watsons and starts waiting for the next bouquet. She intercepts the delivery boy, who talks about a man who gave him the bouquet and then his nose fell out !!!

A strange co-incidence puts Enola on the scent of this man during her next visit to Cahunticleer’s. But just as she is about to clear the mystery of Dr Watson’s disappearance, she finds herself trapped in the glare of police searchlights while trying to get away from the mad murderer. She literally comes crashing down through a glass ceiling.

Will she survive this adventure? Will she ever re-unite with the family she so deeply craves?

Like the previous books, author Nancy Spring continues to give us rhyming titles in the fashion more suited to the Victorian era adventures. It is also a clue that the book prominently features flowers, and the language of flowers that we have seen Enola and her mother using for communication through the previous stories. There is also the fact that the language of flowers was predominantly considered a female domain. Enola mentions at one point in book how almost every other woman in England could have been counted a botanist. So, it also fits in the female-oriented narrative that Enola Holmes series has been featuring as the author shows us the daily injustices of Victorian times.

The theme is supported by the characters of Mrs. Kippersalt, aka Pertelotte. There are references here to works of Chaucer in how characters are named, which literature lovers might find enjoying. But the author also makes a point of what a strong, capable woman she is, running a business of her own. She does have her weaknesses, but they are more generated from guilt than self-promotion. Enola’s visits to this shop are also the reminders of what the keepsakes of almost hundred years ago looked like and the strangeness of the things in which humans find amusement.

The start of the book shows us Enola as any other teenage girl would be – hurt, lonely, sulking. But once she is in action, these instances of melodramatic pining are lesser and lesser. She makes mistakes, but she holds on to her courage and although frightened at times, doesn’t give up. Her wry sense of self-deprecation is also not lost:

It is difficult to choose a new name for oneself. Even more difficult, than choosing a name for a child, for one is confusingly intimate with oneself, whereas one is barely acquainted with a baby upon its arrival.

Like the previous books, the author continues to de-glamourize the life in London and keeps showing how bad it was for the large populace in terms of lack of cleanliness, continuous smell and smoke in the air, infested with vermin:

London, world’s largest metropolis was also the world’s worst governed. London was disorganized into more than two hundred boroughs, each with its own records-keeper, tax-collector, constables, etc.

Hollywell street meandered along the edge of London’s most dense, clotted “rookery”, tottering houses shouldering one another, each containing a swarming “nest” of poverty-stricken inhabitants. Spaces- no, indeed, tunnels, for the upper storeys closed together overhead – passageways no wider than gutters separated these buildings from one another, unlighted, and no cleaner than gutters either, with rats abounding, as well as lower forms of human life.

Life here could be full of horrors and the author keeps up that quotient in the story as she features a baby whose face was eaten by Rats. Imagine growing up like that and what it would do to the mental balance of such person. But it also shows the strength of character for Enola – someone who has grown up in countryside – to come face-to-face with such horrors and not lose the desire to help them.

Her deductive powers are also on display through not only deciphering the numeric cyphers from her family, but also understanding the language flowers and trying to picturize the person who would send such bouquets:

The bizarre bouquet containing hawthorn, poppies, convolvulus and asparagus greens had come from someone who was too odd to belong to any organization. Someone eccentric, petty and spiteful in quite a creative way, someone enjoying an interesting “garden” variety of gleeful madness.

She longs for the family and she yet maintains the desire to remain independent. It will be interesting to watch how she grows up into a woman she wants to be.

I enjoyed this little adventure and you will too if you enjoy learning new things about everyday flowers and accompanying a young detective trying to find lost treasures.