Recently we’ve got a chance to read Five Minutes Longer, a short book by Sidhhant A. Joshi. Though this is Siddhant’s first book, his association with literature is not something new. In fact, his mother is a published author. He was introduced to the wars when he was around 8. To no surprise, his debut book is focused on the events happened during World War II.

The book is small yet detailed. The way it has covered war makes it stand out of the contemporary books. But, we will talk about it a little later. The book is provided to us by the publishers in exchange for an honest and genuine review. And, the review is unbiased by all means. 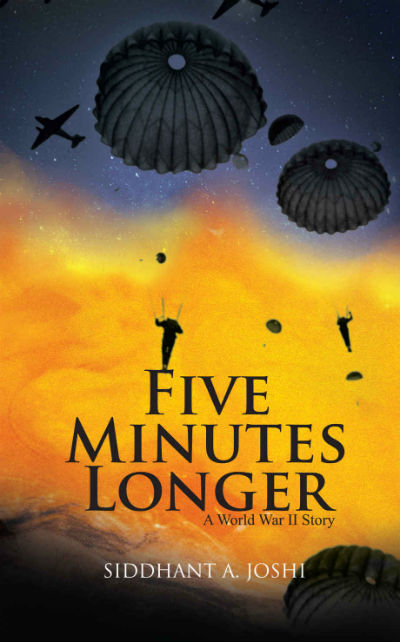 As you can see, the cover page of this book has the shades of yellow and red which represents the wartime quite effectively. The dark illustrations rightly represent the dark effects of wars. On the whole, it is a scene where paratroopers are landing to complete their mission during the dawn. It is one of the important scenes of the book so we can say that the cover page is in sync with the book content.

The book starts with the introduction to a World War II veteran from the British Armed Forces. He visits the grave of a fellow soldier. Visiting the grave made him nostalgic. And, through his memories, we got to know about his first-hand war experiences.

It leads us to witness an army operation by paratroopers across the border. The story, along with the war incidents talks about various war tactics and strategies used in the same. What I like the most is the human attributes of the characters more than anything. And, when we spend a lot of time with the people on regular bases, we surely get attached to them and eventually we become friend (if not family). The author represents this fact in the book through a character’s feelings:

I had nothing else to do except wonder how these chaps, who I had known for such a short time, felt like family.

The way the people with different persona meet with each other and bond together is something to admire..

He held the firm belief that rank is overcome by camaraderie and friendship and did not like being called Sir.

And yes, you can see the straight forward, Army shots at a regular interval in the book. Here is an example.

I found some interesting wordplays in the book.

“And who makes that decision?” Martin asked, agitated.
“Necessity, Martin, necessity.” Victor patted Martin on the back but the latter merely grunted, making no effort to hide his concern.

The way the soldiers feel during the tense situation, and the way they get some time to relax by making fun of the situation; makes them unique. They have a lot of things to complain, but they rather go ahead to change them in the betterment of their country. And yes, more often than not, the source of humor for them is laughing on themselves or the situation they trapped in!

The news was so sudden and unexpected that I was unsure how to react. Fortunately, Jane continued with her briefing, giving me little time to dwell on the matter.

There are some punchlines which will make you remember James Bond and/or Arnold Schwarzenegger movies.

Tomorrow was just a night away.

Soldiers are humans like us and they do have feelings. The way they handle the emotions, makes them a step ahead of all of us. The author represented the jump of a paratrooper from the airplane though nice lines where emotions and toughness are weaved effectively.

I was first in line, the first to leap from the belly of the beast, straight into hell.

The author himself has some clear thoughts. He understood the philosophy with the practical approach. The way he has explained the qualities of a leader is something remarkable:

I am consciously avoiding detailed exploration of the story and mention of the pieces of writing which may lead to the spoilers as much as possible. But these lines must have had given you the idea about the quality of writing and linguistics used in the book. The author is good at developing characters and you can clearly see that a lot of stuff is inspired from other such books, movies, and TV Shows. But, the most important thing is, the way it is packaged for the readers.

The book has some grammatical and printing mistakes. A better proof reading could have made it even more readable. Here is an example:

Ssome 130,000 men simply refused to fight and surrendered to the British in droves.
(Page 11)

The book has some good wordplays but there are places better choice of words could have done wonder.

In fact, given the lek and the possibility that…
Page 54:
— —
The campaign failed to break either Britain or the RAF, which gained supremacy of the skies in a heroic show of sheer grit.

The book mentions the use of “Lie Detector”. Though it was invented in 1921, I am not sure if it was that popular or highly used during the story time.

… We’ll grab those few and put them through the lie detector test.
Page 28:

The author mentions one of the most effective weapons, used by warlords since ages, quite effectively:

… he replied, well aware the man before him was that most dangerous, yet effective of all espionage tools – a traitor.

You might find the psyche of the leaders of the country involved in the World War (by choice or by force) in the following lines:

Oh yes. When you take over a country, it is necessary to crush all local opposition. It is the only way to succeed.

You may agree or disagree with the same, but, you will accept that possibly this is what it is considered as the best strategy.

A glossary could have made the book a little better product. For me, it is worth the value for money and time I spent to read the book. I will suggest you to buy it when a good promotion is running.

Overall, a nice short book which finetunes a balance between a documentary and a commercial story. Definitely, not for light reading. But, if you pay attention to the story and detailing it will be a nice reading experience.