Posted by: Editor August 1, 2021 in Books, English Leave a comment

Exploring the various adaptations of the world of Sherlock Holmes stories by Sir Arthur Conan Doyle, we came across the book series by author Nancy Springer who writes adventures featuring Sherlock‘s much younger sister Enola. We have reviewed the first four books in this series here on Thinkerviews platform.

Continuing Enola‘s adventures is the sixth book called The Case of the Disappearing Duchess.

I had a chance to read this book as I peruse the series and here are my thoughts for you on behalf of Team Thinkerviews. 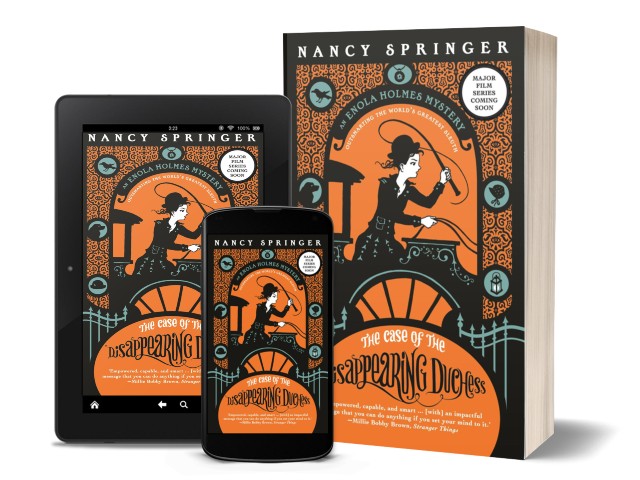 The whole series has been illustrated with matching graphics on front pages and similar to the first two books in the series, this book also features a young, tall and thin girl attired in old-fashioned clothes in dark colours. The colour theme is prominently black, orange and blue.

Enola is driving a cab, a whip in one hand and reins in another, which is quite intriguing by itself. And the little circles around the doorway of this story hold a cap, a dog, a raven, an amulet, feminine accessories and a candle. Like the rest of this series of illustrated covers, all are part of the story and you will find the references to these as you read through the book.

It is July, 1889, and Sherlock Holmes is paying a visit to their ancestral home in Ferndale Hall where a mysterious package had arrived in the night. The package is covered in lots of symbols to ward off evil eyes, but underneath it all, Sherlock can see the chrysanthemum and Ivy. It is clear then, that their mother has finally sent a message for Enola.

In London, Enola has just arrived at work – she is now Mrs. Jacobson and lives at the Professional Women’s Club, as Mrs. Tupper’s kidnapping and following events meant that her brothers now may know all about that little life of hers. Mrs. Jacobson is Dr. Ragostin’s associate and when a distressed duke walks through the door that morning, looking for Dr. Ragostin to find his lost wife, she is there to assist.

The Duque Luis Orlando del Campo of the Catalonian royal household is married to the beautiful and noble Lady Blanchefleur. One day the Duquessa – Duchess in English – went out on Baker Street one day with her ladies and was lured underground by an old crone asking for help. When she didn’t come back up for a while, both ladies – called Mary – went to the underground train station, but the Duchess had just vanished.

Enola’s and Sherlock’s paths start crossing as he manages to find her during one of her visits to Florence Nightingale’s house to deliver the package received from lady Eudoria Holmes and then on as both brother and sister are looking for the Duchess Blanchefleur. As Enola ventures into the dangerous world of London’s underground tunnels, she discovers how the lady in question could have been abducted. What she would be suffering and whether she is alive remains subject to imagination though.

After a few thrilling episodes, Enola enlists help of both her brothers to rescue the Duchess. Will they bond as a family while on this quest together? And what is in the package from her mother?

As she sorted through the ribbons stitched on a crinoline underlay in the last adventure and found the home for more than one lost birds, in this book it is time for Enola to rescue yet another woman in distress while she may finally also have a chance to reconcile with her family. The title of this book is in the rhyming Victorian fashion as well, but it also is quite reminiscent of the first book of the series, where a Marquess had gone Missing and now a Duchess has Disappeared :-).

Although the titles are in sync, the stories are slightly different and this book is also more about the mother-daughter relationship and finding familial love and comfort for Enola. The disappearing duchess is an example of fragile womanhood of Victorian times and as opposite of Enola as possible in terms of physical capabilities.

While Enola is strong, healthy and ready to climb over walls and trees in her path, Blanchefluer cannot even stand on her own. She has been wearing a corset since the age of six and now needs one twenty-four hours as her legs are incapable of supporting even her own weight. Although she is as compassionate and mindful of the poverty around her as Enola:

I see the poor on the streets- here in London one cannot go out-of-doors without encountering the blind beggars, the crippled soldiers, the frizzy-haired women selling nosegays of flowers, the ragged Gypsy children – and I pity them so.

Her husband, on the other hand, is a Spanish Duke, an aristocrat, who has not much experience of how rest of the world lives:

The Duque said the word Underground with the characteristic distaste of a gentleman, disdainful of this new-fangled, dark, and noxious mode of travel, as only lower classes generally used London’s cheapest form of transportation. Even though the locomotives stored their smoke and chambers behind the engines, releasing it only at ventilation shafts provided for that purpose, still, the Underground reeked of steamy, gaseous emissions, plus an overwhelming effulgence of unwashed humanity.

We continue to look at the abject living conditions of London of those days as we find out more about the beginnings of its underground railways system:

He was a ‘tosher’, lowest of the low amongst the “worthy poor”. I had seen them emerge from the sewers redolent of underground creatures, rotten fish, rubbish and offal and wase and slime of all kinds, for the sake of “finds” such as wood, metal, coins, or occasionally, eureka! A dead body that could be looted of its cash and clothing.

I also quite liked the portrait below of the bustling place it was, with a place for almost everyone:

Beer-wagons and bread-wagons, water-carriers, pony-carts, barouches, and broughams passed in constant, necessarily slow procession; an omnibus trundled by; advertising the inevitable “Nestle’s Milk”. Many and various peoples also traversed the cobbles of the square: a fish-porter with a basket of fresh pollock on his head; a bill-sticker carrying his long brush and a bucket of paste, with a roll of advertisements under his arm; a ginger-cake seller; promenading ladies; businessmen in top-hats; laughing children swinging from a rope they had tied to the top of a lamppost; and a hokey-pokey vendor who had set up his churn and folding table in the midst of everything.

While the last book had cryptic crinoline, this one has a Redfern dress – a quite the latest edition in fashion – an extravagant garment that leads to its owner facing dire consequences for wearing it. While Enola uses clothes to her advantage creating various disguises, she also sees the effects they can have on people:

Laundered and starched ladies did not generally roam the tracks. Appropriate dress is just as important to the lower classes as it is to the upper ones.

As I mentioned before though, this book is also a lot more about Enola. For last one year, she has been looking for her mum, for a message, for a sign, for something to tell her where her mother was, what was she doing, whether she was ok, whether she loved her and so on. And the expected letter finally arrives and brings the bittersweet closure she has been waiting for.

One must know oneself, how much one can take upon oneself, what one can bear.

One cannot be a mother without first being a person; family, husband, and children should not be allowed, as is so often the case, to steal a woman’s selfhood and her dreams.

As she understands her mother better, so do her brothers understand her better now. Looks like they all may have a shared future after all..

Another Enola Holmes adventure that sees her find what is lost in more than one ways….