Posted by: Editor July 4, 2021 in Books, English Leave a comment

Humans have in-built love for stories – whether these are fictional or historical. The difference, however, is that a historical story doesn’t always end with a nicely tied end where no questions are left unanswered.

More often than not, the historical stories are compiled from many narratives and tales pieced together to make a complete picture. It is therefore understandable that historical fiction remains a very popular genre where authors try to re-imagine and sometimes re-create tales of times gone by and bring to life the legendary characters as they see them.

Recently, we had a chance to digitally connect with author Harshwardhan who has just published the first instalment in his series called Gondwana Chronicles. Named The Genius of Indraprastha, this book has very interesting premise fusing some well-known ideas with some new ones.

On behalf of Thinkerviews, I got the opportunity to read this book and share my thoughts on it with you…

Being an entry point to the fictional world explored within, the cover page of a book plays a vital role in making the first impression of the book. And, we humans, love attractive things. So, an interestingly designed cover page can definitely influence book “pick-up” decisions :). 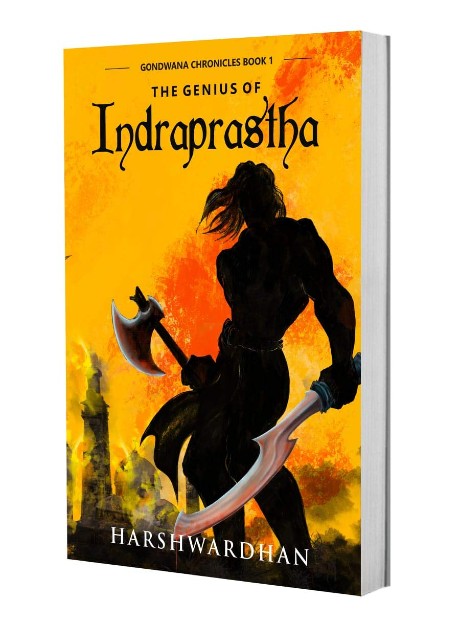 As you can see, the cover page of the book carries yellowish background. It would be interesting to know that yellow is one of the most impactful colors and it is often the last one to fade away in sunlight. And, that’s why it is used in advertisement hoardings widely. The black shadow of a gigantic warrior holding a battle axe and a specially designed sword will remind you of Asuras from Indian mythology or even barbaric warriors.

Once upon a time in the land called Gondwana, five races were living in mutual understanding, if not complete harmony. The Aryans lived North of Narmada in Aryavrat while on the Southern side lived Wanaars, Garudas and Asuras. There was a time that Vaishyas also had a marked kingdom, but now they are scattered across the land.

The source of their troubles are people from the tribe of Sayyids, who left Arabia in search of water for survival. When negotiations didn’t yield the results, the Sayyids created Khidmatgars whose job was to live in Gondwana and ensure that adequate water was supplied to the Sayyids and also create a homeland for migrating Sayyids. For almost a century, the Khidmatgars served Sultan Sayyid, but then they asked for independence. This was granted on conditions that the Khidmatgars will still fulfil their original purpose of helping the Sayyids survive.

Another century passed and the quest for natural resources resulted in the Khidmatgars waging continual wars against the residents of Gondwana. Under the leadership of Commander Bakht Khan, the Khidmatgars have won battles against almost all Gondwana tribes. They have not only won the older cities like Solahari and Agneyapuram, they have also created new ones.

The only time they received a significant pushback was twenty two years ago, at the battle of Indraprastha.

But the stories of this battle are hazy and as Gondwana is standing now at a critical moment in time when their very existence is threatened by the recent fall of Somajeya, the Saptsindhu Mandal is meeting to devise a forward plan. The young heirs of the Gondwana kingdoms are told the full story of the war of Indraprastha, as it happened.

They learn about the Prince of Hastinapur called Martand, his genius at creating weapons comparable to divyastras of the old, and the twisted turns of fate that consumed him. The Commander’s and Martand’s actions left Gondwana bleeding for years and wiped out millions of people.

And it looks like that was only the beginning of this war that still continues on many fronts and is now threatening to consume everything in its fire. They have found the sources of forbidden knowledge and both sides believe that

What they do with this knowledge, will decide the fate of their world…

As you can see, I have just outlined the backstage above. Imagine each of the tribe populated by variety of characters including soldiers, spies, scientists, innovators, rishis, kings, princes and princesses and you can imagine how intertwines all these stories become to move the book forward. As you can see from the map below, given at the start of the book, the Khidmatgar capital of Daulatabad is almost where Mumbai is today, and from here they have to go through the Vindhyans and the Wester Ghats to get to rest of Gondwana. 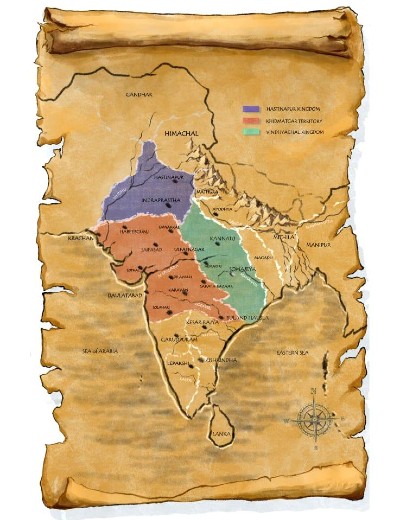 Map from The Genius of Indraprastha (Gondwana Chronicles Book 1)

I liked the concept and how the author has blended together an invasion driven by the need for natural resources like land and water. Although Gondwana is a land of plenty, no natural resources are unlimited when it comes to human needs and greed. The Khidmatgars also have some commendable qualities including how they never go back on their word, but it is also their greed for the gold that partly results into the warfare to acquire more territories.

Harshwardhan does a good job of painting the picture of Gondwana tribes, their kingdoms, their strengths and weaknesses and how they interact with each other through the Saptsindhu Mandan which has representatives from all major kingdoms, rishi ashtam and even a democratic representative of the people. Since this is the first book though, there are places and times when you do question actions or inactions of some characters, but I am sure that will all come together as the series progresses.

Looking at the characters, Bakht Khan and Martand are the main protagonist pair, but lot of other characters also stand out and you are sure they will have a part to play in future, e.g. Prince Agnivesh and his brother Aadvik, Princess Hansika, Rudra, Ajeet and Banasura. Although Hansika is the heir apparent to the Garudas, the series could use some more strong female characters.

One of the central ideas that the book drives is how technological advancements in warfare weaponery can serve as deterrents. If both enemies are armed such that a war is going to mean certain destruction of their people, that is a big enough incentive to stop the war. Let me share some of the quotes from the book around the nature and necessity of wars that I liked:

War has always been the same story – old men talking and young men dying. A real brave man would try to win the situation without recourse to war.
War is necessary to change the status quo and creating a new world order.

The other interesting aspect of the book is that the author shows us thought processes of both sides and how it is important to remember why you are fighting in the first place:
You must always appreciate the talent of the enemy, but you must also understand what makes you different from him.

As the book features a lot of battles, there are inevitably bloody, gory battle scenes including duals. I liked the philosophical bits in the first part that show ancient wisdom better than the battle scenes:

Management is doing things right. Leadership is doing right things for a cause and for your people. Means and ends both become important for a great leader.

Power, if concentrated in one hand, would be vulnerable to abuse.

Your surrounding constantly communicates with you but you must be able to listen to what it says.

Or when the author explains the way Aryans came to worship various devas, e.g. the dual of Yama/Dharma.

One should lead a righteous life if one wishes to have a peaceful end when the time comes. Hence, righteousness as a quality is associated with one’s end of life. This socially approved righteousness is called Dharma.

The book has good premise and interesting characters, but what lets the book slightly down is number of grammatical and proofreading errors. Let me share a few examples of printing mistakes:

Page 37:
Commander might be aterrible man forrestof Gondwana but people like Allauddin revere him like a God.
Page 71:
Council had started sorting outthe nominations. Dilawarhadalready suggested few of his captains..

As you can see, spaces are missing. These sentences should be:

Commander might be a terrible man for rest of Gondwana but people like Allauddin revere him like a God.
Council had started sorting out the nominations. Dilawar had already suggested few of his captains…

Looking at some other errors:

Page 45:
Agnivesh’s arrival at ashram had created rumours that prince wont travel so long if it’s not a question of political or military importance.

Agnivesh’s [even better – Agnivesh’ ] arrival at ashram had created rumours that the prince won’t travel this far if it wasn’t a question of political or military importance.

Page 109:
Ajeet had contention on his face.

Here, Ajeet is expressing his satisfaction, so the word should be “contentment”, as “contention” indicates disagreement.

It would be good if the next edition of book is published after removing these errors.

All in all, an interesting first installment that gives us mighty enemies on all sides and enough to wonder about as to how they will use the long forbidden knowledge – to destroy or to restore peace to their world?

If you are looking for a book featuring brave and courageous warriors fighting for what they deem right for their people then this is the book for you.

What matters is what you do with this knowledge.

The Second Chronicles of Thomas Covenant – The One Tree | Book Review