The October 2014 issue of Safari – a knowledge and science oriented magazine from India – is out quite on time. Here are our personal views and reviews about the same. Before we move ahead, it is worth to note that: there are a very few magazines we came across which offers a quality reading material. Safari – a science and knowledge magazine is one of them.

The cover page of this issue gives you first impression of a mythological fantasy novel. 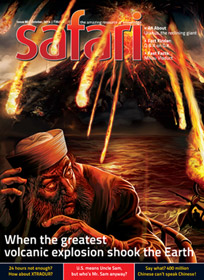 The photo of the feathered rainbow in MegaPixel segment is worth a watch. If you are a bird lover or nature enthusiast you will like it.

Editorial is missing in the magazine. As editorial usually builds a link between the reader and the editor, by representing the Editor’s views about various aspects of the publication and the surrounding, we consider it as one of the important aspect.

There is a saying about elephants, which summarises as: “they are more valuable after their death than they are alive”. Being one of the largest animal which is often seen in our neighbourhood, elephants are quite charming. They are appreciated for two things: their ivory and memory. They are killed to collect the ivory and smuggle it. A small article discusses these stuffs, it is a kind of awareness oriented article.

As the new government in India is working on setting up proper foreign policy, the need of defence projects to take off as expected, is also being looked after. The article about – India’s futuristic stealth jet project – and its progress is worth reading.

As the forensic science saw a lot of achievements and improvements in last century, the same proves to be very helpful in solving crimes. Three major inventions which caught the attention of majority of public are Fingerprint and cornea scanning and matching, DNA pattern matching and Lie detectors. Though it’s trustability is questioned many times, but still it is one of the important aid for the crime investigation agencies. A small article about it is worth a read.

With the rise of mobile phones, we saw a lot of people stopped wearing wrist watches. Now as the mobile phones are day by day getting smarter, they outdate a lot of other gadgets. Apart from landline phones, watches and calculator, the cameras are also facing the competition! There is a 3 page article about such study in this issue, which is definitely worth reading.

Uncle Sam is referred as a kind of identity of US. It is an icon of US since around 2000 years! Have you ever thought to dig into the history to find who was uncle Sam? and how came he associated with the identity of USA? There is a 3 page article answering these queries. It is good to read such articles to know about several things which we use but don’t really know why.

We often hear the busy people complaining that there are only 24 hours in a day! Well, what about having an XTRAOUR (extra hour) in a day?! The idea seems interesting. The article is quite interesting read.

“United we stand, divided we fall”, is the famous saying by Swami Vivekanand. It is also the basic principle of survival, not only in animals but also in human beings. That is why live in a bunch in the form of a society, village, city etc. An article about animals exploring the same fact is quite a good read. Writer B. M. Purohit’s writing style is interesting as well. The article is rich with photos.

The fast facts – segments bring information about “Millau Viaduct” – a bridge which is taller than the Eiffel Tower!?

China is the biggest country of the world in terms of population. So when anyone ask a question which language is most-widely spoken in the world, we may see a threat by Chinese language to English. But, the case is, 400 million Chinese can’t speak Chinese!!! An article written by Samrth Vyas in nice manner, brings this factual information in detail.

Samarth Vyas wrote one more article in this issue, and it is about – the greatest Volcanic Explosion on the Earth. It is really good and informative article.

The Q & A – Fact Finder – segment contains answer to the following questions:

The – All About – segment this time have article about Uranus.

Overall a balanced issue which is worth the value of money and time you spent for it. Our personal verdict: don’t miss it.