June 2015 issue of Safari, a knowledge and science magazine from India (Gujarati Edition), is quite on time. Here are our views and reviews for the same.

As we often said, the Editorial is one of the most important space of any newspaper or magazine. It not only gives the reader a chance to understand the point of view of the editor about the content of the magazine, but also establishes a link between both of them.

This time, the editor raises a question about the Indian soldiers who died fighting for the British government during World Wars. The editor represents his views strong about the fact that these soldiers were “brave” and shown “exceptionally well fighting skills” during the war, but they should not be called “patriots”. The editor also raises the voice that by considering some killings, assassinations and mishaps as “patriotism”, we are doing injustice to the real patriots. Quite a legitimate and thoughtful point. 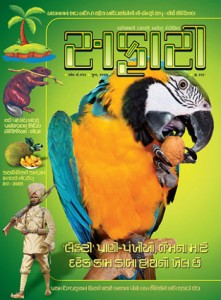 The cover, showing a bird in green background gives a look of a nature oriented magazine to this issue of safari. It is eye catcher though.

Reader’s reactions are good to go through. The praise for various articles in the last issue shows that the people are interested in good reading. Almost all the reactions (published) talks about the R&AW and its found R N Kao in positive manner. On a side note, currently we are reading the book The Kaoboys of R&AW: Down Memory Lane (by B. Raman) and will publish our reviews for the same soon.

We got to know about the North Sentinel Island via this issue. Actually it is an island situated in Bay of Bengal, and it is one of the Andaman Islands. A group of tribal people lives there and are known as the Sentinelese. They refuse and reject any contact with other people and thus they are the people who are untouched with the modern advancements and present civilisation. The article is informative and added with some rare photographs too. Such facts should be part of study in Indian education.

The “super question” talks about the famous (and controversial) – Kalpasar project. The project was planned a very long ago (it is in talks since 1975) and one of the state government release assumes it to be completed by end of 2020! The project envisages building a dam in in the Gulf Of Khambat and targeted for establishing a huge drinking water reservoir and irrigation solution. The side product of the project is considered to be a 10 lane link road between Saurashtra and South Gujarat. The article explores the reasons of dispute in summarized manner and is worth reading. The last paragraph of the article suggests that, “often, the solutions of a huge problem are very smaller and simpler”.

We know that some people prefer the use of “left” hand over the “right” and we call them lefty, but do you know that this pattern is found in other species as well?! An interesting article by B M Purohit, explores it in nice manner. The article also have some reference of the game of “cricket” as well. People interested in Zoology will found this article interesting.

A very detailed article about the Indian Soldiers who fought for British Government during World War I is written in very interesting manner by Nagendra Vijay. The article explores a lot of facts which tried to hid from the people due to political reasons, by British Government. The article shows some vintage photographs and refers some historical facts. On one hand you will feel proud for the bravery of those soldiers, on the other hand you will feel sorry for their bad-luck, that their sacrifices never took note off. And, ultimately the sweat and blood went into vein. The article also explores the brutality as well as war tactics of British rule. A must read article from this issue.

D N Kaushik brought us another article about the zoology. His focus is Beaver – the civil engineer animal. 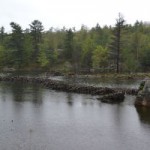 A dam by Beaver 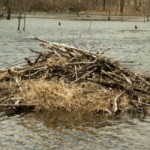 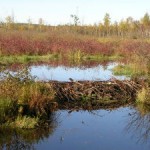 If you like to explore interesting facts about various species, you will like to go for this article.

The article about “JackFruit and its effects to a diabetic patient” by B M Purohit is comparatively smaller and notes some interesting incidents. The article clarifies at the end that the stuff is still under “research”.

The : Q & A : Fact Finder : section talks about following questions:

You can see from the content that the articles are not only about the science but it also tries covering a wide range of topics including history, current happenings and much more. The writing style of most of the authors is really good. All of them try conveying the things in simplest possible manner. The fearless take on the reality and facts, make it even more worth reading.

Final Verdict:
It is definitely a magazine issue worth reading. It gives you full value for your money and time.