Safari – is a respected name in the magazine world for the content it brings to the reader. The magazine is a good choice if you like to avoid any distraction (like advertisements) in the same. This magazine contains the advertisements of its own publication and nothing else.

The knowledge related articles available in the same are well researched, and more importantly well written. Writing in a manner which attract the reader and make the complex things simple to understand, is a very specific skill.

Recently we took a note that since a few months, the English edition of the Safari magazine is stopped publishing. We however will continue reviewing Safari magazine via its Gujarati edition. The language may have a barrier in terms of the readers, but the briefing about the content will give all our readers, the general idea of the content of the magazine.

So let us start our journey of reviewing first regional magazine on this blog with the April 2015 issue of Safari Magazine – Gujarati Edition. 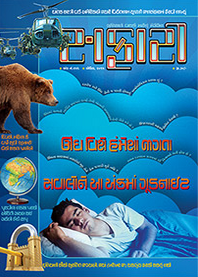 The cover page with blue background makes it attractive.

The “from editor’s desk” section is always an important part of any magazine (or even a newspaper) as it plays the role of a bridge between the reader and the editor. It lets editor convey his/her vision behind the content of the issue and at the same way helps the reader to understand the vision or point of view of the editor. In addition it lets the editor talk about some of stuffs which were missed in the content. So, when you read any magazine, don’t forget to take a look at the editorial of the same.

In editorial, the editor Mr. Pushkarna, talks about the comfort zone. I personally believe that we need to keep ourselves challenging with the things in our day-to-day life also, to keep enthusiasm intact. That it why the Indian literature (and in fact literature in any language) advises one be a life long student. If you read newspapers – you might have heard (such news should not be missed, but they often, behind the movie gossips) about World’s first solar powered plane (you can read more about it at: http://www.huffingtonpost.in/2015/03/11/solar-impulse-ahmedabad_n_6844156.html and other such links). The airplane is named as Solar Impulse and it’s official website is: http://www.solarimpulse.com/. This project is led by Swiss businessman André Borschberg and Swiss psychiatrist and aeronaut Bertrand Piccard. The editor of the magazine got a chance to see the plane and meet Bertrand personally. It is very inspirational to read about that meeting.

The inside cover page talks about Bheem – the most powerful diesel engine (Railway) – 5500 HorsePower – is very interesting. You may also like to watch this YouTube video to know a little more about it.

The last cover page brings in an interesting article about sleep, and some of very curious yet out of the box questions about it. It includes Sleepwalking and various strange cases about the same. The case known as “A. F. Case” – about a fellow who shot his own father during sleepwalking is also mentioned in the content (a very small briefing about the same is available at: http://en.wikipedia.org/wiki/Homicidal_sleepwalking). The case of “Robert Ledru” is very strange and you may think that you are reading a detective fiction, but it is true. Robert was a French detective and while investigating a murder, he found himself as the killer!!! He was so honest that he surrendered himself to the officials. (This case is also mentioned on the above mentioned page).

Here is the link to a book written about this case:
The Two Lives of Robert Ledru: an Interpretative Biography of a Man Possessed

The article about the Sandy Island and the mystery about is informative and nicely written. Those who are interested in “discovery channel” and its programs will love to read it. Others however can enjoy it as a thriller. You can know more about this island from: http://en.wikipedia.org/wiki/Sandy_Island,_New_Caledonia.

We have found references of the “Vietnam War” in various movies and TV channels (remember Rambo movies?). But if you want to know more about the same, there is a very detailed article available in this issue. The discussion about “mass killing” techniques used in the same, is emotional and will make you think that “can educated social animals – humans – do such brutal things”? An article written in emotional manner.

If you are interested in “Biology” or “Zoology” the article about various species which can live for days and even months without taking food or drink will interest you. This FAST-ing related article talks about the well known cases like frogs and camels too.

The article about the “most secure” places on the earth will remind you movies like Goldfinger, Mission Impossible- II and others. It gives you information about:

Seems interesting right? Well, the magazine have a Fact Finder section too. It has a Question/Answer segment which answers 13 such questions. And yes, for the film and music lovers, there is a quiz (with answers).

We found this issue very good at content and writing style. It is definitely worth to go for the same.