Having a Juggler juggling 5 red balls, the cover page of Safari Magazine – December 2014 issue looks pretty attractive! It breaks its stereotype cover page theme which otherwise give the impression of a nature oriented magazine. A welcome change! 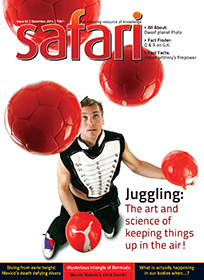 A high resolution photograph of the bar headed geese under the title -The high fliers – printed on the inside cover page looks attractive.

No magazine is complete without an editorial. It joins the reader with the editor by giving the reader an opportunity to know the views of the editors about the current happenings and the content of the magazine in the context. This issue lack editorial as the downside.

We are sure that many times you came across seeing the discarded tail of a lizard keep writhing! Didn’t you wonder at the time and though whether the tale is still alive after being detached from the main body? Or will it join the body and reconstructed if tried putting together? There is a well written small one page article which is worth a read in such case.

Those who are working with the overseas client are familiar with having more than one timezones and day light time switching on specific day of the years in many countries like USA. India is very big country in terms of size and sometimes people feel that the daylight is not the same at the various areas of the country at the same time. So whether it is advisable for the country to have more than one time zones? A small article about the same is a good read. What about asking the readers their opinion when having such articles? It will make the magazine a bit more interactive.

Many times we consider several things, obvious, and part of our life that we didn’t ask questions about the same. Pizza – one of the favourite foods of many, is found being eaten in almost all major countries. Have you ever wondered about it’s discovery? A comparatively smaller article about the same tries giving you answers of the same. We feel that the article could have been more detailed.

We found a good article written by Samarth Vyas answering some of the real life questions interestingly. It is a Q/A segment talking about the following points in “What is actually happening in our bodies when …?” context. We like the approach. Here are the questions answered (in the same context):

The animal lovers will like a detailed article about – Skunk.

A reality check on Indian artillery’s firepower is interesting read.

Adventures are adorable because of the thrill it gives! Probably the thrill is the feeling which motivates one to do the things which are rather consider dangers, be it bungee jumping, sea surfing,…. or cliff diving. An article about the Mexico’s cliff divers who are diving from eerie height is a thrilling article in itself. It is written in detail.

Since many years (or shall we say decades) the mystery keeps revolving around the “Bermuda Triangle”. The area is considered to have some mysterious forces which sucks anything from ships to aircrafts! Many unexplainable incidents adds to the myth. It is an interesting topic for the readers since years, and an article in this issue focused on the same proves, that it is sill “in thing”. The article tries explaining the things in scientific manner at places.

The Q & A : Fact Finder : segment have answers for the following questions:

The “all about” article about Pluto (the dwarf planet) is written nicely and will found interesting especially by the astro-lovers.

Overall a balanced issue which is focused on varieties. The content it comes with is really good. If you are interested in quality reading, you shouldn’t miss it.

Don’t forget to read our review articles for the previous issues of Safari; we are sure you will enjoy reading them.