As the world has shrunk with modern, convenient means of travelling and communication, it has become the melting pot that started its journey with the severe clash of culture the colonization by Europeans started. There is a lot to be said about the evils of slavery and loss of independence and cultural heritage for numerous countries of the world under the European rule that started with a single goal of economic profits and riches and did not care for what was destroyed to achieve this.

As the European wars turned into World Wars I and II, they also opened doors for liberation for many countries and almost seventy years later, the fight for Independence can be only seen through the prism of patriotism if you grow up in India. But, what about the people with Indian heritage who grow up in modern day Europe / America. Where would they find themselves when they think about the Indian struggle for Independence and the heroes that sacrificed their lives for this cause?

These were the thoughts with which we picked up Scottish author Abir Mukherjee’s first book called A Rising Man. Set in the pre-independence Calcutta/Kolkata, this book introduces a police detective called Sam Whyndham. It has been admired by audiences abroad and now has two more books in the series, and on behalf of Team Thinkerviews, here are my impressions on this book:

The cover page features the mega-city and Eastern capital of the empire, encased in the melting gold of a dusk/dawn. We see a few pedestrians, a cycle rikshaw and a European officer – all on a path leading somewhere but going in different directions. 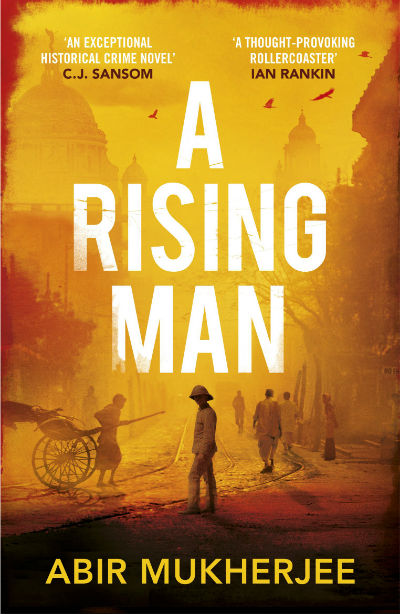 The previous edition of the book showed a classical doorway with a bright yellow sky in the background making the silhouette of the city of Calcutta, as it would have been in the early twentieth century with spatters of blood at its centre and a hero with his features unidentified. It highlighted the darkness of the city divided into the White Town and the Black Town and where lives were held cheap. I think the new cover page is a definite improvement as in it has that mystical appeal of a story hidden inside the slowly unveiling setting.

The story starts with the corpse, as Sam Wyndham gets his first look at the murdered white man called McCauley, a senior government official, on a hot April night in a back alley of Calcutta, in a not-so-reputable neighborhood. Sam is a brand-new arrival to Calcutta with horrors of World War I and the death of his wife behind him and an addiction to Opium as his only source of comfort. The primary reason for him landing this job is his previous acquaintance with the current Calcutta police commissioner Charles Taggart. He has an English co-officer called Digby and an Indian subordinate called Surendra Nath Mukherjee, whom everybody calls “Surrender-Not”.

As Sam learns the ins and outs of the City he has come to with its complex and contradictory set of characters, we learn more about McAuley. Marked as a “Rising Man” very early in his career, McAuley had the ear of the Lieutenant-Governor of Calcutta – the man second in command of British India after the Viceroy – had rich and influential businessmen as friends and control over a fair amount of treasury money. But such a position also indicates he must have been facilitating a lot of non-work related activities for his friends and colleagues. The suspect list starts to grow as Sam meets McAuley’s secretary Annie Grant, powerful Scottish businessman Buchan, McAuley’s subordinate Stevens, who has now got his job and with a bit of skepticism – Rev Dunn.

They do get a few breaks though – in form of an informer of Digby, a train robbery only an hour outside Calcutta and the military police hunting down the prime suspect – the long hunted freedom fighter called Benoy Sen. In spite of all the trouble he goes through for this capture, Sam, however, is not convinced that Benoy is the murderer.

Meanwhile, the atrocity of Jalianwala Bag has happened, the LG is moving with his government to Simla for summer and Sam is practically told to stop looking further as Benoy Sen is going to be hanged nonetheless.

Why then does he have to go looking for the truth? And if everyone around him is playing some part in hiding the real murderer – what price Sam will end up paying to find him?

First of all, let us say, we enjoyed the book. Right from the beginning, you start to see this world through Sam Wyndham’s eyes and the journey is interesting enough to keep you wondering about the identity of the murderer which flits in and out of the images you glimpse. The pace is good, the dialogues fun and witty and sharp, and the characters are even sharper.

Sam himself is not a perfectly happy, murderer hunting, ex-Scotland yard hero – He is depressed, addicted to opium, lonely in his personal life and cynic as only those are who see too much of death to lose all faith. And still, in his own way, he is a seeker of truth and justice. Thanks to his previous experiences with Irish rebels, he is much more open to taking in cultural impressions and injustice of the British oppression in India. It is good to see the book make such an effective point of showing that the United Kingdom wasn’t so united and the Irish, Welsh and Scottish struggles for Independence all have left their own stories.

We see the dark side of Calcutta as Sam visits the prostitute house run by world-weary Mrs. Bose, or visits the China town looking for opium. All these characters feel real – their motivations, their fears, their bravado, their courage, and their strength to live through this city which seems to have a different rule for each and everyone of them.

As Abir Mukherjee’s characters talk about law and order, independence of India and day to day governance of British India, the author highlights how differently the same issues are when they are approached by the ruler and the ruled e.g., the freedom fighters for Indians are terrorists for the British. That the wealth was drained out of Indian subcontinent to make many a business empires in UK. That the Anglo-Indian community was well and truly stranded in the middle as “Domiciled Europeans” with nowhere to go. Some of my favourite moments in the book are featuring pragmatic Annie Grant’s character and she sums it up so well in the lines below:

This is a land of hypocrites. The British pretend they’re here to bring the benefits of western civilisation to an ungovernable bunch of savages, while, in reality its only ever really been about petty commercial gain. And the Indians? The educated elite claim they want to rid India of British tyranny for the benefit of all Indian, but what do they know or care about the needs of the millions of Indians in the villages? They just want to replace the British as the ruling class.

And later when Benoy Sen talks about how he was impressed by Mahatma Gandhi’s thoughts and his way of fighting with non-violence as a perfect counter tactic to that of the British. Sam gets the insight of this tactic through his discussion with his fellow Irish border:

“How did one hundred and fifty thousand Britishers ruled three hundred million Indians: Through moral superiority – their subjects had to believe themselves to be inferior; that they need to be ruled for their own benefit.”

And the Calcutta of this book is not just an exotic location where murder happens. There are hordes of books that were written by British authors as murder mysteries and were successful in their own right by featuring cities around the world in the period setting of the colonial era. Here, Calcutta comes alive – It is not just a setting – it feels like a character itself. And the descriptions of this city through Sam Wyndham’s eyes are like watching through a mirror – what was “sujalam sufalam malayjsheetalam” for the Bengali poets – doesn’t quite look like that to the English eyes:

Bengal: verdant, bountiful and benighted. It seemed a country of steaming jungle and mangrove, more water than land. Its climate was as hostile as almost anywhere in the world, in turn parched by baking sun and drenched by monsoon rains, as though God himself, in a fit of petulance, had chosen everything in nature most abominable to an Englishman and set it down in this one cursed place.

And still, Calcutta was one of the jewels in the British empire and they did take a certain pride in it:

Calcutta- the City of Palaces. Our star in the East. We’d built this city, erected monuments and mansions where previously had stood only jungle and thatch. We’d paid our price in blood and now, we proclaimed, Calcutta was a British city. Five minutes here would tell you it was no such thing. But that didn’t mean it was Indian.

As it is a murder mystery, it also has philosophical thoughts and nuggets like below:

What was left of any of us after death? A special few might be immortalized in bronze or stone or in the pages of history, but for the rest of us, what trace remains other than in the memories of loved ones, a few sepia-toned photographs and some paltry possessions we may have amassed?

And in spite of the heavy background of oppression, the book does have many light and entertaining moments, e.g., the different versions of English various characters use, or that the concept of “Daylight Savings Time” was used in Tea gardens of Assam or the way bureaucrats learn to ignore and work around the system.

If you like murder mysteries with a historical background, this is just the book for you. We enjoyed reading it and are looking forward to the next installment in the series….