While there are thousands of magazines hit newsstands regularly not all of them are worth spending money and more importantly time. Magazine quality is not the only factor to consider, the personal choices do matter a lot. You would definitely love to explore magazines based on your liking and hobbies. And, there is nothing wrong in it.

The magazines which are focused on knowledge and science are often considered worth reading but boring. When Nagendra Vijay – an Indian Author who writes mainly in Gujarati – started his career in writing around 60 years ago, he was determined to write the content with a substance without making it boring. His known father and acclaimed author – Vijaygupta Maurya – has conquered many milestones in the arena till then. It is worth mentioning the fact that Nagendra Vijay’s son Harshal Pushkarna is also a talented writer and keeps the legacy of the family, in terms of literature, moving forward.

Safari is a knowledge magazine from India which is running since many years. It had a set back period also, but, eventually, it was revived and is running stronger today. With the limitation of being available only in Gujarati, a regional (famous and popular too) language of India, its reach is limited too. It is worth to note that the magazine has tried publishing its English edition also, but unfortunately, it didn’t survive. Nagendra Vijay is the primary man behind the magazine – Safari.

May 2019 issue of Safari Magazine (Gujarati Edition) is published quite on time and hit the newsstands in the first week of April. We, however, were busy with some books and other stuff, so the review is delayed a little.

This issue of Safari is very special for various reasons. It is 300th issue of the magazine (Gujarati edition)! It is really tough to run a knowledge-oriented magazine for so many years. In this issue’s editorial, Nagendra Vijay, the editor, author and the main factor behind the magazine explores some of the pages from the diary of his life. He is 75 now and still has the same passion for the work he is doing.

I highly recommended you read the long editorial of this issue to know more about him and his journey. It also explores some sad moments. It is disheartening to know that some of the visionary suggestions by talented people often fail to be considered for implementation by the authorities. It could have been proven beneficiary to the country otherwise.

Let us take a look at the cover page of the magazine. 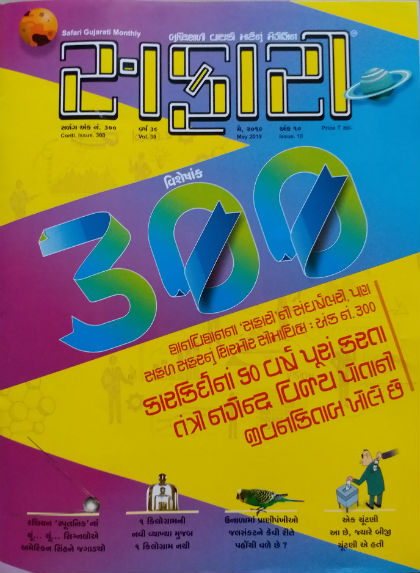 The cover page of this issue is made with cheerful colors and is attractive at first glance. It conveys detail about the content within quite interestingly. Light gray illustrations within the yellow background, however, doesn’t look very effective. It gives an impression of having dirt spots on a rather smooth surface. Overall, a decent cover page which could have been better.

As we have already talked about the editorial earlier, I am not going to repeat it. I will, however, would like to share a fact mentioned in the editorial. Ravindra Kaushik, Capt. Vijay Kaushik and many other authors of team Safari are none other than Nagendra Vijay himself! Yes, they all are the pen names of him. So, a large amount of the content of an issue of Safari is actually penned by him. Definitely, an effort worth praising.

Let us take a look at some of the interesting articles I found in the magazine. I will try to focus more on the smaller articles as often people explore detailed articles but give a miss to the smaller ones. My aim here is to point important factors explored in smaller articles in this issue of Safari.

The Backbone of Internet and Dr. Narinder Kapany

Have you heard about Dr. Narider Kapany? The chances are there that only a few readers know him and those who’ve heard about might not have heard in detail.

Here is a YouTube video which will give you little more information about him:

The back of the front cover page contains an article about him. Of course, it is a small one, but I will recommend it for reading. Dr. Kapany should have been awarded a Nobel price. Here are some external links I would recommend to get more information about him.

For Your Information segment has some really informative articles.

I enjoyed reading an article about

An unbiased article about AC/DC (the electric current) is also there in this segment. The article notes some of the historical details and explains them in the modern perspective. I think the physics people will relate to more strongly.

The article about Shakuntala Express explores a unique segment of Indian Railway. I will recommend you to read the article as it also explores how ignorant we are when it comes to preserving history.

If you love reading mysteries, a small article about paranormal stuff and Kolkata Metro will interests you.

Once Upon A time…:

It is the election period in India. Well, In a big country like India, small scale elections happen at the gap of every few months at different places. This election is very important because in this roughly 1-month long session, the people of India (that is Bharat) is going to elect (and select) the central government for the next tenure. It is obvious to have a detailed article about the elections in India, in this issue.

The topic the author has chosen is very important. In this article, the author talks about an election in India when people with strong will and character used to participate. The most important lessons to learn from the article is about supporting the truth and opposing corruption. In a rare incident, when Pt. Nehru, the first prime minister of India, during a campaign came to know that the candidate for who he asked people to vote, has done some corruption. He then demanded from the people to defeat the candidate!

Will you believe it that a strong leader of the party asks people to defeat a candidate of his own party when found that the candidate is unsuitable for the service and responsibility?!

Can you expect a similar behavior by party leaders in the current scenario?

The article, of course, talks in detail about the corruption scandal and the incidents related to the same. Written in his signature style, this article by Nagendra Vijay once again proves his credibility and the efforts he put in when researching for a topic. Definitely a “not to miss” article with a lot of details, facts, images, and illustrations.

From An Old Issue Of Safari:

It is one of the most important articles of the issue. I will not spill beans about it by talking in detail. All I want to say is, the article is about Sputnik. It also takes references for various books and historical incidents. And, eventually, it reflects the way mankind made remarkable progress in a specific area of science. A highly recommended read. It belongs to the history but it is still relevant (or possibly more relevant). Don’t give it a miss.

Here are some of the other interesting and detailed articles from this issue of safari, which I enjoyed reading:

How the birds and animals survive during the hot summer days and how do they cop up with the requirements of remain hydrated?

I’ve also enjoyed reading FactFinder and other segments in this issue.