Reading is to mind what exercise is to body. How many times we’ve heard this saying? And yet, we feel the substance in the same! While reading, our brain visualizes the thing via imagination making our “little grey cells” (remember, Hercule Poirot 🙂 ) work extensively, making them stronger and better.

The regular readers of ThinkerViews are aware with our love for the reading :). We love to read a lot. So, we are always on the quest for quality books, magazines and other similar stuff. While there are literally 100s or 1000s of magazines are published every month, it is practically impossible to read them all. Based on your likes and interests you need to shortlist them. Then come the affordability and availability factors too, making the list even shorter. And, then comes the most important factor, the substance. Just reading for the sake of it, is not something desirable. In addition to money, we are spending the most precious currency, our time, for the same. And thus, we need to pick the ones wisely.

Safari – is one of the best magazine I came across. It explores the facts and knowledge from a scientific perspective and at the same time, it also talks about the legacy of knowledge and valuables our ancestors gifted us. Thus, it gives a balanced read. Unfortunately, the English edition of the magazine doesn’t survive, but, the Gujarati edition of the same is running stronger. And we love to read it.

So, we were curious for the September 2018 issue of Safari (Gujarati Edition). However, as it is the festival time (Krishna Janmashtami) time in Gujarat, we are able to get it a little late. As I’ve completed reading it, here are my personal and unbiased views and reviews for the same. 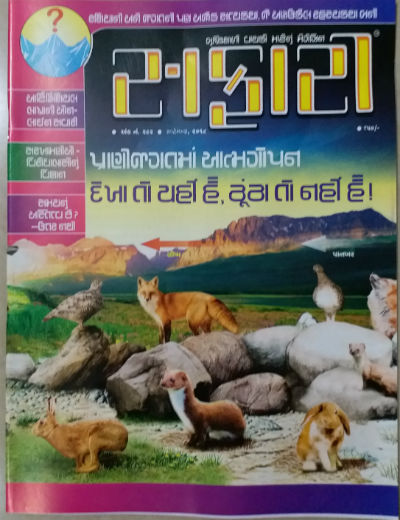 Whatever we say about “not judging a book (or for that matter any media) merely by its cover”; we tend to fall for an attractive one for sure. There is nothing wrong in it. It is the human psychology which makes us admire the beauty. As you can see, the cover page of this issue is quite an interesting one. As there is a detailed article about various species and their way to hid themselves in the background (so the predator cannot recognize them); the major part of the magazine cover is occupied by them. It gives you a feeling of looking at a nature-oriented magazine. Though, the use of purple and bluish color makes it a little different (than a nature-oriented magazine). Overall a nice and attractive cover.

I believe whenever you read a magazine, you must read the editorial also. We see that in most of the cases readers used to skip the editorial, reader’s reactions, and index segment. The editorial, as it suggests, gives an opportunity to the editor to share his vision about the issue you are reading and also lets him/her share his/her opinion about current happenings. The editorial serves as a bridge between the reader and the editor in a way. The reader’s reaction section often brings many interesting things about the previous issue(s). Some of the well-read readers even pinpoint any mistake found in a specific article, and thus you also get a chance to rectify your knowledge.

If you are following Indian politics, you are familiar with Rafale Deal and the controversy associated with it. You can follow the below given WikiPedia link to know more about the Indian MRCA Competition.

Why we are talking about the Rafale Deal? Well, the editorial is focused on the same. It rather talks more about self-dependancy India (that is Bharat) needs in terms of weapons, vehicles and another defence related stuff. It also compares that how comparatively cheaper – Tejas (the LCA) – could have been a better solution if the project was finished on time. Also, the editor brings in some example of speed, in the way the government authorized sectors to work in preparing such stuff; and what should have been the ideal speed. And, it elaborates the reasons why private sector companies should be called in to remain updated in the competitive world, as the technical advancements affect the warfare in the most effective manner.

This language is claimed to be very easy to learn. There are a limited number of words and a few grammar rules make it easy. Do you think that one such language should take over the means of communication? Especially, international? You can read a 6-page long interesting article about it in this language.

Here is an interesting video from the public domain of YouTube about Esperanto:

Our routine sometimes we do the comparisons among the things which are not so comparable. For example, when we are comparing the circumference or are of the Moon’s surface with that of the Earth; we compare with various sized balls. Now both these things have a vast difference in size, but we need to use them for comparison.

An article by B. M. Purohit in this issue talks about many such interesting stuff like comparing the eyesight of an Engle and a human, length of trees, various mountain ranges, birds, and more. The six-page article is written quite interestingly and is added with many historical photographs and illustrations.

Definitely a worth reading article.

Once upon a time, before many years when Russia was behind the iron curtains of Communism, there happened a tragedy which remains a mystery till date! In order to inspire the people of the country to perform courageous stuff, an educational institution there had a special program. The students were encouraged to do a trip to the deadly mountains clad in ice. And they were offered level-1, level-2 and level-3 certificates based on the type of trip they took.

A team of 10 fellows left for once such trip. Eventually, one of the team members caught with ill health and had to return in between. Was he unfortunate, or rather fortunate? Well, it is up to you to decide. None of his nine fellow team members return from the trip alive! And, the reason for their deaths is still unknown!

A grippingly written article about this tragedy is found in this magazine and it is worth reading. It is added with many historical photographs, maps, and illustrations.

Camouflage – An Art of Survival:

For some of them, though, Camouflage is the best way to survival.

A detailed article in this issue talks about some species and their abilities or attributes to hid in the background in quite interesting manner.

Here is a public video in the same regards:

In addition, there are some small articles along with Q/A and FactFinder segments makes this issue rich with content.