Posted by: Editor September 9, 2018 in Books, English Leave a comment

In the world of thriller readers, the name James Patterson is widely known. He has penned many best-selling books in the crime thriller genre including Alex Cross, Women’s Murder Club, Detective Michael Bennet and Private series. Like Robert Ludlum and Tom Clancy, James Patterson shares the writing with many aspiring as well as established authors to create these page turners.

The “Private” series features ex-marine Jack Morgan“s world-class detective agency that has offices all around the world. 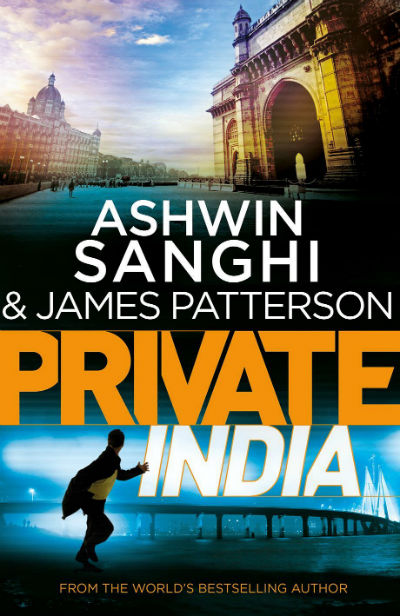 Since India happens to be a big part of the English reading world, the Private has come to Mumbai and this adventure is featured in Private India – a book co-authored by James Patterson and Ashwin Sanghi and published by Century in 2014.

The Private India team has headquarters in the glamorous mega city of Mumbai. Hidden behind a fake crumbling building facade in Colaba is located the posh, ultra-high security office with a world class laboratory and analyzing gear that is home to the team of Santosh Wagh, Nisha Gandhe, Mubeen Yusuf and Hari Padhi.

Santosh Wagh is an ex-policeman suffering from guilt over killing his wife and son in a car accident, a psychosomatic limp and bouts of alcoholism. But with his encyclopedic memory and inherent toughness, he is a fitting boss for the agency. The book tells us that he met Jack Morgan in aftermath of 2006 train blasts in Mumbai and two established a rapport that led to Santosh working for Private.

Nisha is also ex-policewoman, married to a stockbroker Sanjeev and mother to a daughter, she is a keen investigator who doesn’t shy from flirting occasionally with people who can provide relevant information. Hari Padhi is the thirty-five year old techno-geek who also spends significant amount of time in the gym and Mubeen is the medical examiner. Mubeen also lost a wife and a son, but in Baltimore at hands of neo-Nazis who hated him for being an Indian living in a foreign country and beat the family up until part of it died.

So much for the investigators and now to the murders. Being a James Patterson thriller, there are plenty of them. Starting with a reputable plastic surgeon Dr. Kanya Jaiyen from Bangkok visiting Mumbai, who is found dead in the hotel bathroom. Since Private provides security consultation to the hotel chain globally, Santosh Wagh is called in and his sixth sense flickers. There is a sense of ritualistic drama around this body and he suspects that this is only the start.

And soon enough, he is proven right. In less than twenty-four hours two more corpses are found – journalist Bhavna Choksi and Bollywood singer Priyanka Talati. Both strangulated with the yellow garret like Kanya Jaiyen and corpses staged with a theme.

Now we are not going to tell you the details of the theme to keep the spoilers at bay. So let’s just say that the drama progresses rapidly and five more women are murdered in rapid succession.

Part three of the book is a real page-turner when you have had enough clues to have that feeling that you know who-dun-it. Meanwhile, the last victim is taken captive and the murderer is also their only link and chance to stop the upcoming bomb blasts in Mumbai.

But suddenly every thing seem to go wrong for Private in a foul stroke of luck that takes almost all their players out of the game. Who’ll save the day?

This is a typical thriller expected from this franchise. No matter where it is set, you expect the stories to be swift, the murders not too gory, the chapters short and the sentences snappy. There are enough characters and tracks to keep the pace fast without getting into long descriptions or monologues.

The canvas of Mumbai is perfect as it supplies aspiring celebrities, children turned into prostitutes / criminals, middle-class people just trying to make a living, greedy sharks using everything and everyone for their own benefit, fraudulent god-men, lawyers making a mockery of justice and every other conceivable specimen you require to write a crime thriller. These are all familiar characters. We have seen them in the newspapers, countless movies, television dramas, works of fiction as well as facts. The book works because they all fit in nicely in the plot. Everyone does their duty and exits the stage promptly.

The idea of murders by strangulation with yellow garret (Pila Rumaal) and its association to the cult of Thugee are not quite new though. One of the works that come to mind is late Harkisan Mehta‘s Peela Rumalni Ganth featuring Amir Ali Thug.

The thugs were known for luring innocent pilgrims and travelers passing through the jungles of India and murdering them. These practices have been loathed and the Britishers claimed to have put an end to them during their rule. But the Thugs are also associated with Kali-worship through human and animal sacrifices. They also featured in Indiana Jones and the Temple of Doom, where Indie saved innocent children from this murderous cult. However, the cult also had rules that forbid them from killing women, foreigners, sages, etc.

Another central theme of the book can also be summarized by the pithy Indian saying “Aurat hi Aurat ki sabse badi dushman hai – Women are their own worst enemies“. In this dog eating dog world, instead of supporting and saving each other, we are too busy cutting each other’s throats. It is the women who abandon their young children, who molest their young charges for personal gain or fetish, women who try to compete with men and their rules by offering women in bargain for their own advantage, women who are labelled to be vicious, manipulative and ruthless, even more so than men.

While it is true that everyone is a victim of their circumstances, it is no excuse to ruin someone else’s life. If you turn away from an injustice happening in front of you, there is always a chance that you’ll be part of it the next time. There is a line between self-preservation and a deliberate crime, and it doesn’t take much to erase it.

Although never heavily philosophical, Private India manages to be a thought provoking book.

We liked how the authors paint the picture of Mumbai such that it can be visualized by readers from outside India:

Mumbai was a throbbing metropolis with the attitude of New York city, the chaos of Kathmandu, the vibe of Miami, and the infrastructure of Timbuktu.

Apart from Juhu Beach in the suburbs, the Chowpatty has always been Mumbai’s favorite leisure area. During working hours it remained the haunt of the contentedly jobless, who would nap under the canopy of its dwarfish trees. At sunset though, its character turned distinctly carnival-like, with children screaming for Ferris wheel spins and pony rides. There was entertainment for adults too. Pavement astrologers, palmists, and fortune-tellers would target hapless tourists and for a fee tell them whatever they wanted to hear. Monkey shows, street plays, tightrope walkers, and gymnasts displaying incredible yogic positions would take over the beach, while at the other end a row of bhelpuri shops selling Mumbai’s most famous street snack – roasted puffed rice and fried semolina drenched in sweet and sour chutney – would do brisk sales as hordes of hungry visitors took time off from the drudgery of their day-to-day lives.

To give you a small glimpse of the ritualistic murder scenes:

The first victim was left with a lotus flower and a dining fork tied to her hands, and a toy Viking helmet tied to her feet. The second was found with a rosary in one hand and a bucket of water in the other. The third was found lying on a faux animal skin, half a rupee coin placed on her head, and a small bell-shaped pendant hung around her neck.

The murderer is given a few pages to express his/her thoughts occasionally. The musings, sampled below, reminded me of Mal’akh from The Lost Symbol.

How delicate is the fine line between life and death? At a given moment a person could be living, breathing, talking, and walking. At another moment, she could be a cold, unmoving corpse. Of course, most people live like corpses in the humdrum grip of their prosaic and pathetic lives. Not much difference between life and death for the world’s living cadavers.

The relationship between hunter and prey is unique. Its almost like unrequited love because one party hardly feels anything at all. Ask a stalker about his relationship with the one he stalks and you will begin to understand the intense yearning I have to live with.

And some philosophy from a day-to-day worker:

There are no mistakes in my profession. Unlike a piece of wood which can turn out too short when you cut, if a piece of metal is botched, we simply wait, reheat, and give it another try. There are always second chances – both in metal and in men.

And the fact that the reigning deity of a metropolis like Mumbai is always Money:

Money had the ability to make everyone and everything look respectable. For the forty-five thousand cricket fans seated in the stands, cricket was all about passion and entertainment. For Munna, it was simply business. He chuckled to the fact that very little happened on the pitch without his say-so.

We enjoyed the book and we can recommend this to any crime thriller, who-dun-it lover with a few spare hours…

Sauvastika: The Struggle of Shantiputra | A Short EBook By Ashwin Sanghi | Personal Review