Posted by: Editor2 December 6, 2017 in Gujarati, Magazines Leave a comment

We often say that there are tons of magazines publish every month and they literally flood the newsstands. However, not all of them has the substance so you can spend your money and more importantly your time for the same.

Well, it depends upon an individual’s choice that what kind of magazine he/she wants to read and we cannot set any rules for the same. However, there are no two thoughts on the fact that it is always good to go for a knowledge magazine which explores the fact as it is. Safari is a Gujarati Magazine which definitely falls into “worth reading” category.

December 2017 issue of Safari is published quite on time and here are our genuine and unbiased reviews for the same. 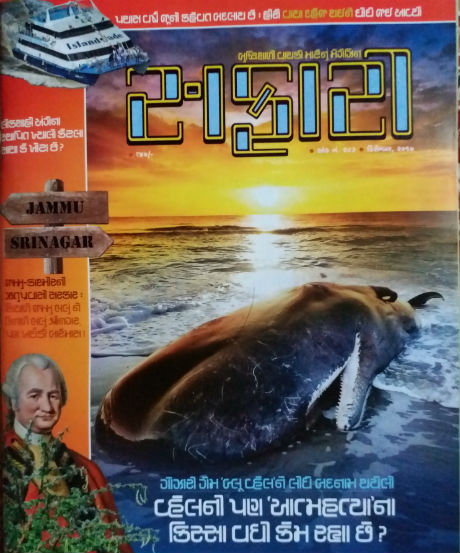 Giving an impression of a nature-oriented magazine the major part of the cover page of this issue is occupied by a whale stuck on a seashore, along with an interesting title of the theme article. Interesting signboard of Jammu-Shrinagar (the capitals of Kashmir – India), a photo of Robert Clive and a mention of an article about Ferry service in Gujarat, makes it informative. Overall an impressive cover page with balanced colors.

The editorial and reader reactions:

Usually, we do not talk much about reader reactions (i.e. the letters/emails of the readers published in the magazine), however, there is a letter published this month which was talking about the bullet train project. Of course, everyone is entitled to his/her opinion but the knowledge articles should be read as it is, there is no need to see it from the political aspects.

I, personally consider, the editorial as the most important segment of a magazine (or for that matter any media) as it bridges the reader and the editor. It gives a chance to the editor to explain his point of view and express his vision about the content of the magazine and/or current happenings. This month’s editorial refers the concept of the time machine in terms of re-publishing the very first issue of Safari. It would be interesting to see how the technology and future were visualized by the expert those days. Some of the stuff which was considered as a technological marvel those days is a reality now, and some targets are missed too. It is an interesting idea to republish very first issue of the magazine and I look forward to it.

This segment, published in the back of the front cover page, usually talks about something interesting about India in each issue. This time it talks about “AryaBhatt” aka Aryabhata and the invetion of PI. The article refers the following famous Sanskrit verse about the mathematical calculations.

Rather than spilling the beans about what is mentioned in the article, I would suggest you read this small article (just one page), you will surely enjoy it.

B. N. Purohit’s article about recently started Ferry service in Gujarat is definitely worth reading. Again, rather than taking any political angle, he simply focuses on facts and explores, how this project took shape over last 50 years. Actually, it was only in talks for many years. The work is started before a few years and now it is complete. Though, as of now, it is not possible to transfer cars using this service, but over the course, it will be enabled.

This article talks about Ferry service in various European countries and how it is a necessity over there. One thing I like in the article is the way it explains “how the current in the water of Gulf of Khumbhat was considered as a challenge to this service” and the easy solution for that.

Definitely a well-researched article. It reassures the fact that, if the work needs to be done for the greater benefit, it should be done, by keeping the political point of views at the bay.

The burden of cost to keep moving capital twice a year in Jammu-Kashmir:

Popularly known as Durbar Move, the state of Jammu and Kashmir in India holds a tradition to function its government from two capitals of the state, six months each!

What is Durbar move? Why is it necessary? When was the tradition started? How is it performed? Is it necessary to keep alive this tradition? How much burden does it put on the government and ultimately the taxpayers?

An article by Ravindra Acharya in this issue gives all the details you need to know about Durbar move. It also raises some valid points which any common man can ask. While reading this article at one end you will feel amazed to know some lesser known facts from the history and at the same time you feel pity that how the things eventually turned out.

Do you know that when British ruled India, they built “The Inland Customs Line”? By the name of it, you might be thinking of it as a good governing initiative. But, it is a small pathway surrounded by thorns to prevent “smuggling of salt” by its rightful users! Actually, it is better known as “Indian Salt Hedge”.

If you have ever wondered that why the “Dandi March” is considered as so much important chapter of the war of independence, India; then you should read this article by Ravindra Acharya.

Here are some external links you should follow to read more about it:

In addition to these worth reading articles, you will find a detailed article about “growing suicide attempts by whales”. It also provides you information about how some good humans are trying to do their bits to save Whales.

The last cover page brings in an article which talks about the beliefs and realities of “Democracy”.

The Fact Finder – is a Q/A segment which is worth reading. I like the addition of a segment which contains short Q/A in the same. In order to keep your amazement intact and reading experience unaltered I am not listing the questions here, but you will love reading the article for sure.