It is tough to choose a book genre to read, especially for the book lovers. While some of them will go for any genre as far as the book is good while others are specific to stick to a specific genre (or genres). Some like Romantic books or even Rom-Coms, while some loves mythology. Crime thrillers have their own fan-following and arguably a large number of readers love to go for it. But, it is tough to find a good crime thriller which is worth your time and money both.

Recently, I got a chance to read a crime thriller named Murderous Greed penned by debutante author Arun K. Nair, and here are my unbiased and genuine views on the same.

The title of the book itself will ignite an arena of thoughts in your mind. While it is a famous saying that “Greed Is Good” and at the same time, we know that it is only if referred in a specific context. So when it is murderous, is it good? Well, the answer to the question is simple, no. And what about this book? Well, I will suggest you go ahead, read the complete article and decide yourself :). 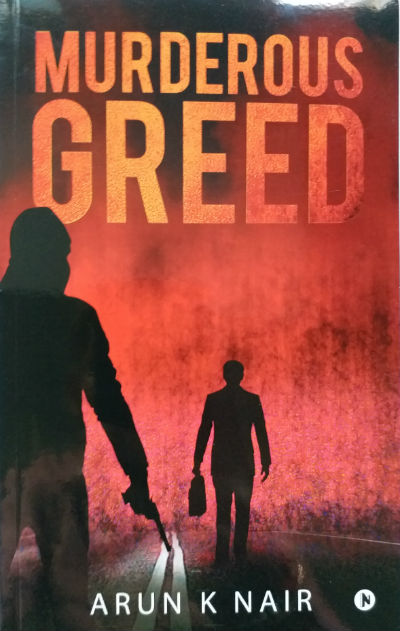 The first impression of the book is made by its title and cover page. The cover page of this book is quite interesting. The high percentage of red and black color represents the evil factors mentioned in the title quite effectively. So, yes the cover page is impressive.

The book starts with a tragic incident happened in a lady’s life. She lost her husband at very young age and now trying meet ends. In addition to herself, she needs to take care of her only daughter who is the sole reason to live the life for her. She is running out of money and she has to sell her most loving possession and get some money instead. Well, officially it is a loan against a valuable, but till she is able to pay back the whole amount with interest, it is no more her property. It is not all, the tragedy intensifies from here. Seeing hope in future and happy to found an intermediate solution to her money crisis, she was planning the immediate actions she needs to take including food for her daughter. When she was going back to her home with the money, planning all these, her bag was snatched by a scooter rider!

There is a lady who got ready to attend a marriage and as the marriage venue is nearby, she decided to go there alone, giving time to her family members to get ready. It was early in the morning and there is no traffic. She has walked just a little when a bike come at full speed from behind. The rider tried hard to snatch the valuable chain (known as Poothali) and in the course of his success, he injured the lady. It was not enough! She lost her balance and her head hammered hard into a pole nearby. People from the marriage hall came fast and called an ambulance, but on the way to the hospital, she lost her life.

After a few minutes when a young entrepreneur named Karthik was going his home on the ring road. He had a busy night at the office. Karthik is getting richer day by day and achieving the success many others could dream of. But, his success story cannot continue anymore, as he was murdered on the ring road!

The first two incidents have happened in the Avadi area of Chennai. Avadi and Ring Road both the areas come under Inspector Satyajit’s charge.

Inspector Satyajit is a well-built person who lives a simple life where his routine is almost fixed. He can’t miss talking to her mom on schedule and his fitness session. Total four police station comes under his charge. These chain snatching incidents are making him concerned. He already had arranged teams and put them on patrol, but so far, no luck. But, two murders on the same day?! He cannot take it. He has to solve both these cases at his earliest. In fact, the commissioner himself called Satyajit and given him a very tight deadline.

How Satyajit solves these murders is explored in rest of the book. Over the course, we meet Yojith, Jude, and Naren from Satyajit’s police team. The young entrepreneur murdered is identified as Kartik and we are introduced to his family members as well. His competitor who can be considered as a rival, Sriram, is an interesting figure. We meet many characters as the story progress.

Actually is is better to explore the story by reading it 🙂 .

After completing this book, I got the following thoughts. Our actions are responsible not only for our but also for other’s fate as well, so be cautious. One need to make sure that his/her actions are not creating havoc in others’ lives. And yes, every action will have a reaction, maybe it will take a while or maybe it will take a long, but it will be there for sure.

So, while this book is written with the sole aim of entertaining the reader who enjoys crime thrillers and police procedural, like a typical masala film; it conveys a good message as well.

Actually, I see a lot of books having comparatively small typefaces, to reduce the print length and thus the cost. This book came as a good exception. The moderate font size of the content in this book makes it a delight to read.

I feel that whenever a scene is changed there should be a small separator (like * * * for example) to make the reading experience even better.

Arun is good at vocabulary and he tries to keep the dialogs small yet effective, and it works. He builds character well. Especially the human side of the police officer(s) is explored well. Well, they are also people like us and thus they have their own limitations too. There are a couple of places where you may think that “an officer like Satyajit shouldn’t ask such a question / do this thing”.

The author himself has links with Chennai and he explored some of the areas of the city and nearby, quite effectively. He knows how to build a scene effectively. His explanation about a place and characters helps to visualize the scene. Same we can say about the way he explores expressions of a character.

It is rare to find the exploration of bike races, both legal and illegal, happen in India. Satyajit’s visit to Mathews’ place is something fresh to read. At the same time, author weaved demonetization as a reference in a nice and convincing way.

Here are the best lines you can hear from the mouth of a police inspector. It comes in the form of an advise Satyajit is giving to a watchman.

There are many ways to pass your time. Listen to news, read a newspaper and if you have nothing else to do, sleep. Don’t smoke.

The no-nonsense approach of Satyajit is explored through the lines like the following:

Satyajit thought that the police station known for its discipline and control should not allow fun to take over from their responsibilities.

The lines like the following explore the mindset of an investigation officer in simple yet effective manner:

Police officers find it difficult to accept anyone who don’t look at their eyes and speak.

There are places in the book where sarcasm and witty lines meet each other:

So you prepare documents that are never read.

And, this is yet another masterpiece.

I always feel I am short by one rupee.

Yes, the greed never ends. If you don’t put a limit, the desires are always unbound. The book contains some good philosophical lines as well:

The book has its own limitations as well. For example, the proofreading could have been done better to avoid mistakes like:

A FM radio was playing in full volume at the shop.
-Page 27

Also, the phrases like “cousin brother” found in many books, especially by Indian authors. They should be avoided.

These days, I see an approach/trend of using adult content or cuss words for various reasons, in books including those are penned by even popular authors. Some call them to explore the things realistically and some want to attract readers by initiating them. I, personally consider it as a positive attribute of this book that Arun has avoided such stuff.

It is tough to write a police procedural as it involves knowledge of forensics and psychology as well, and thus requires some research work to be done. Salil Desai does it quite well. And, after reading this book you will definitely think of Arun to be an author to watch out for in this genre.

Key points of a suspense crime thriller should not be given away, or otherwise, the reader will not enjoy the thrills. By sticking to this motto, I am intentionally avoiding some attributes and incidents involving the characters of Yojith, female lead, and some others. All I can say is, you can keep a watch on all the character and their actions, and you will enjoy the book even more.

If you are an avid reader, you will complete this book quite faster. It is worth to note that the author has already planned a sequel to this book! Yes, he is writing a supplementary book in this series titled Greed Ends which moves the story ahead from where it ends in the book. Of course, the sequel will try to connect more dots and tight the loose ends, so it is worth to watch out for.

If you like thrillers then you will enjoy reading this book. It is small, fast-paced, not so serious yet had its own substance kind of fast-paced crime thriller.