Bharatiya (that is Indian) literature fascinates our team. It is the richest literature known to the mankind that explored all the possible emotions, situations, times, knowledge and wisdom of respective times. The tales (regardless of the fact that you consider them mythology or history) are intended to convey life lessons (if you want to learn, and if you don’t want to learn, you can still enjoy them in the purest of literary form).

In addition to being the most open and inclusive civilization, the Indian culture promotes the tellings and re-tellings and even re-imagining all its tales. And, in most of the cases, the writers and authors never disrespect the original sentiments and cultural values. Of course, they have their own perspective, but they are wise enough to keep the essence of the original tale.

This tradition gave rise to many versions of the same stories from different perspectives. Sometimes the author connects with a specific character in the tale so well, they try to represent the same from that particular character’s perspective. Here are some such books, we got a chance to read recently.


It was long ago we bought Yayati, a Hindi audio book from Amazon, as we’ve heard a lot about the quality of its writing, and the book was available for free as a credit to our Audible account.Originally written in Marathi by Shri Vishnu Sakharam Khandekar, this book is translated nicely in Hindi by Shri Moreshwar Tapasvi. The audiobook is narrated by Sakshi Malhotra.

While the tales of Yayati, Sharmishtha, Devayani, Kach, Nahush and all the other related characters is known to us since our childhood; we love explore various re-tellings of the same. And, this book seemed to be a perfect choice in that context. 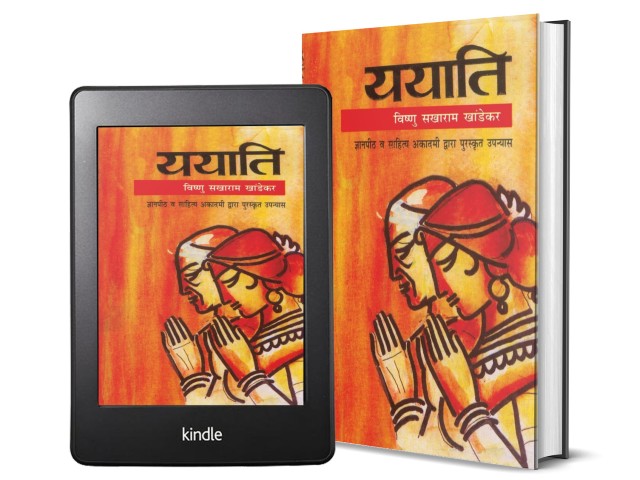 While the Marathi version of the book had a different cover page, we will talk about the cover page associated with the Hindi edition we got a chance to listen to. The designer tried maintain a classic look with the use of illustrations on the cover page. The shades of yellow, going to be saffron makes the background eye catching. It also reflects the truth of life, as Kach describes it in the book. You should sacrifice personal attachments for the greater good. (In Indian tradition the color saffron refers to sacrifice.)

The illustration of the couple is very meaningful. Despite being the story. a love triangle (as Kach was never a part of it); Devayani, Sharmishtha and Yayati; the cover page with no sign of the third person, refers to Yayati’s dilemma of choosing between Devayani and Sharmishtha (during his married life). While he is married to one, her nature makes him detached from her and try finding the real happiness in the other. The illustration of the couple conveys it beautifully.

Overall, not so attractive but classic and thoughtful cover page.

Nahush is a brave king of the Chandravansh clan. His honorable deed made him worthy of being the Indra – the king of the devas! The wheel of the time keeps moving forward. And, as per the famous rule of nature, ‘The pious deeds make you worthy of the supreme powers, supreme power makes you careless and flamboyant, this changed attitude makes you doing undesirable stuff and eventually you fell’.

The fate (and, well articulated plan of Purandar) made Nahush doing such things and he eventually got cursed that ‘neither he nor his descendants will enjoy happiness!. This curse is very important aspect of the book and is mentioned at various places.

Devas and Danavas are at loggerheads, as always. While Brihasspati and Shukracharya were both able, talented and worthy guru of the Devas and Daityas respectively; Shukracharya developed and mastered the art of making the dead souls alive. It helped tremendously to the Daityas, and they started performing way better during their wars with the Devas.

Ultimately, Kach, the son of Brihaspati visit Shukracharya to become his disciple with the goal of learning the ‘Sanjeevani’ vidhya.

Shukracharya had a daughter – Devayani – as the only child. She meant everything to Shukracharya.

She was the reason Kach learnt Sanjeevani Vidya from Shukracharya.

Then something terrible happened and they both parted ways, by cursing each other!
Hot headed Devayani and Sharmishtha – the daitya princess, were childhood friends. Something unexpected happened during one of their ‘river bathing session’. It resulted into Sharmishtha pushing Devayani into an abandoned well, to meet with her death. But, she was saved by Yayati, the king who was on his hunting escapade.

Eventually, they got married and Sharmishtha was taken by Devayani with her, as a maid!
A humiliation for life in the revenge of a humiliation and attempt to murder!
The fate has its own plan and the hot-headedness and proudy nature of Devayani made Yayati deviate his path. Despite warning (call it death-threat) by Shukryacharya, he fell for Sharmishtha!

What happens then-after is the story to explore while reading this book.

The book is really lengthy and require you many sessions to read. Mostly, avid readers love to explore such books.

When started listening to this book, I wondered, what could have made this book so long and so much appreciated!? The question was answered when I was listening it. It is a very detailed emotional and psychological exploration of the lives of these legendary characters.
Of course, at places, it is too descriptive and elaborative, but its detailing is simply fantastic. The author must have been appreciated for such an in-depth exploration of these characters, associated incidents, places, nature and the timeline. I like the narration as well.

The book has all kinds of emotions (you can say Nava-Rasa) explored in detail. And, still the author doesn’t cross the limits when exploring Shringar rasa. The same can be said for the exploration of other Rasas as well.

While listening to the book you will feel the pain of Shukracharya, Devayani, Sharmishtha, Yayati and others. The mental trauma they have to go through will make you believe that just having powers, intelligent or material happiness is never enough. You can be happy without any of these things and you can be living your life as a curse, even with all the luxuries at your disposal.

The book also explores, how the game of politics and burden of ruling makes one almost merciless.

In addition to Yayati, his mother and his brother Yati’s roles are elaborated in detail.
The sexual-escapades of Yayati are worth exploring. In some of those scenes you will realize, how much a person can fell from the right path while his/her urge for carnal pleasure overpower his senses. You will also realize how the drinking habits play the role of a deadly enemy. And, when you are vulnerable, how your sub-ordinates can take advantage of the situation and do – what you couldn’t have done – on your name!

Of course, there are moments of joy, happiness and fun. And, they are not few. You will also explore pure friendship, pure love, pure passion, pure devotion and other such stuff in this book. Also, the way Yati’s mindset was change over the course is something worth exploring.
Kach is the most calm, composed, wise, intelligent, pure and respected character in the book.
Detailed exploration of characters, daily household banters and blunders, wars, the author leaves his mark everywhere.

The book doesn’t talk about the other sons of Yayati (he had more than one with both Devayani and Sharmishtha) and is concluded in somewhat in-conclusive manner. On one way, it is the beauty of the book. But, I think, a lot more could have been explored in this story, at least when it is written in so much of depth.

An in-depth, psychological and emotional account of legendary characters from the ancient Indian literature. Some parts are stretche and some parts are missed. But it doesn’t fail covering all kind of emotions and scenarios. It can be read a guide, full of life-lessons. I like the writing and narration both.

Previous: The Eye of the World – The Wheel of Time Series by Robert Jordan – Book 1 | Book Review
Next: ZIDD! by Hetansh Desai | Book Review