The world of fantastic fiction is an unending source of stories that highlight the richness of human imagination which creates worlds that are richer and deeper than our own times and filled with magic and adventures. There are the classics like The Lord of the Rings, but there are also a lot of other similar works that weave the threads of mythologies around the world with a rich landscape filled with humans and other races as they face and resolve the conflicts of their times.

Indian mythological tales have the concept of yugas – that there are four consecutive ages namely Satyayuga, Tretayuga, Dwaparyuga and Kaliyuga. At end of Kaliyuga, the world as we know it, ends and the cycle begins again. We also have the concept of reincarnation and rebirth – to carry out our incomplete tasks and pay our debts from previous lives. Author Robert Jordan’s widely popular fantasy series The Wheel of Time will remind you of all these concepts once you start your reading journey with these books.


Published in 1990, The Eye of the World is the first book in this series and has been loved by readers all around the world. It has been followed by number of books, and this year, we hope to complete reading this fantastic series and explore the adventurous world within. So, let us start with reviewing the first book of the series for you on behalf of Team ThinkerViews. 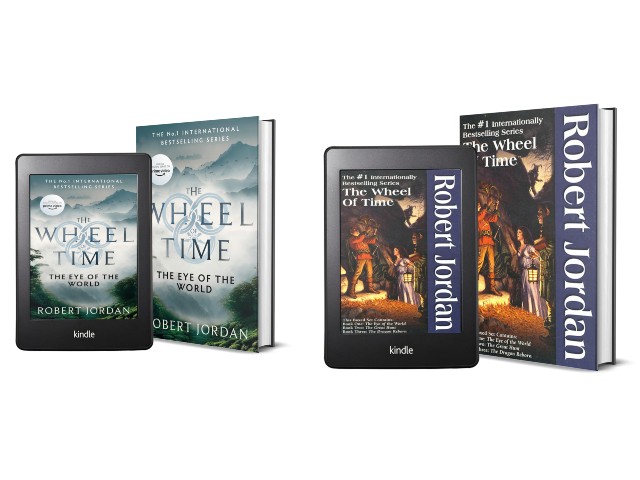 The book has different covers for different versions. Here are a couple of them. As you can see they are quite different. Actually, the newer version is visually more appealing as it draws on the timeless concept of the serpent eating its own tail rather than previous versions that were created more in line with the young adventurers looking for Indian Jones or Star Wars type costumes.

While the older one has a vintage look and can be considered attractive in that sense. The latest version looks really classy. It’s finishing looks attractive. The use of not so bright colors look fantastic. I like the new cover page much more than the older one.

Once upon a time, there was a man called Lewis Therin Telamon. He accomplished great things, but he paid very high price for the great things in the end and the consequences were so great as to breaking the world apart.

It has been thousands of years since the days of the Dragon, and life in peaceful town of The Two Rivers has a very comforting pattern. Men and Women of this hamlet are preparing for the spring festival of Bel Tine, although it has been a long winter and spring is late in arriving. The town is in for a surprise this year though, as not only the regular peddler and a gleeman arrive in time for the festival, there are also visitors – a lady named Moiraine and her companion Lan.

As young people of the village, especially Rand, Matrim aka Mat, Perrin and Egwene are looking forward to the festival, the night brings horrors instead of joy. The town and farms around it are attacked by monstrous creatures called trollocs, driven by dark creatures. To his great surprise, Rand finds that his father has a heron marked sword and can fight. When Rand brings him to the village for treatment of his wounds, he finds burnt houses and frantic people.

He also discovers that lady Moiraine is an Aes Sedai, a woman who can touch the Source and wield magical powers and Lan is her Warder. Moiraine convinces Rand, Mat and Perrin that there is a pattern to the attacks and they must leave the village, if they want to protect their families.

Egwene joins the party just as they are about to leave and so the journey starts. The way is full of enemies and variety of risk and perils. A few days later, they are joined by Nynaeve – the Wisdom of the Two Rivers – the head of village women, who has come looking for the youngsters.

The trollock armies drive the fleeing party to a dark and dangerous place called Shadar Lagoth, and while trying to escape the shadow, they are all separated – Rand, Mat and Thom the gleeman in one group, Moiranine, Lan and Nyaneve in other and Perrin and Egwene in the third. All three groups head towards the city of Caemlyn, where they hope to catch up with others.

Rand and Mat’s journey is beset with Darkfriends around every corner and Thom loses his life trying to protect them. Tired, starved and cold, they somehow survive every attempt to kill them, but the darkness is creeping into their dreams and their minds. Perrin and Egwene’s journey takes them to the Tinkers, where they learn the way of the Leaf, and then onto the persecuting, torturous Children of the Light, until they escape with help of wolves!

While Caemlyn does allow them all to meet up once again, the city is hardly the end of their troubles. If anything, it appears that all forces around them are colluding to force the young friends into the hands of the Dark One. The Dark One may be still imprisoned, but his bonds are weakening and all stories indicate that he is about to destroy the place called the Eye of the World and then will proceed onto breaking the world.

Why are Rand, Mat and Perrin such a focus of the Dark forces? What is Moiraine’s purpose in scouting for them? Caemlyn is hundreds of miles away from the Eye of the World which is at the brink of destruction. Is there even time enough for the forces fighting against the Dark One, to reach there to counteract against whatever he is planning to do?

Is this the last battle? Or is it start of a war all over again?

Some authors write straight-forward, simple stories, that click with the readers who may be short of time. While some authors go on to create worlds so rich with history and culture that thousands of pages telling its tales are not enough and over time fans become experts in this culture, speak its languages, reenact its characters and battles through conventions dedicated to such worlds. This is one of such series. Firstly, there are nearly a dozen books, so you can imagine the scope of this stories.

Secondly, you nearly are at the end of this first book, when you have a clearer understanding of what happens in the prologue. Because you have had time to familiarize yourself with this world and its characters, their history, their perceptions and prejudices, you understand the beginning of this tale. More importantly, you see the cyclic nature of the wheel of time, the serpent eating its own tale, the symbol of eternity, the perpetual war between light and dark and the amazing web the author weaves to give us this powerful story.

At the heart of such story there is always a hero who is born to play a role written by destiny for him, with not much choice around it. Here, we have five such young people. Rand might be the dragon reborn, but he certainly is not the only one with a difficult journey. Neither of them have any concept or training in fighting, but when time comes, they all have no choice but to fight:

Anything can be a weapon, if the man or woman who holds it has the nerve and will make it so.

In stories, the heroes find the treasure and defeat the villain and live happily ever after. But sometimes heroes die. Are you a hero?

This book was first published in 1980s. And keeping that in mind, when you read how the female characters of the book are created, it is quite a delightful experience. Women of these times are strong, they have their say in running of households, villages and nations. They are strong-willed and the age-old differences in the way men and women view the world are highlighted here without any preaching notes of feminism.

A lot of fictional fantasies that came before these stories had only beautiful princesses. For example, in Lord of the Rings, the only female warrior gets a chance to fight because she wouldn’t take a no. But she still has to sneak to a battle. While here Nynaeve and Egwene make their own choices. Young they might be, but they do take their shots at creating their lives, even if it means giving up the life they have always thought they will have in their peaceful village and a possibility to become much feared and hated Aes Sedai and living in their world full of political turmoil.

Being the story of epic struggle between light and dark, the narrative is filled with lots of gems of observations. Let us share a few with you:

The mind plays tricks in the night; the eye sees what is not there.
Hope is like a piece of string when you’re drowning; it just isn’t enough to get you out by yourself.
The price of help is always smaller than you can believe, always greater than you can imagine.

And the most longed for dream of humanity along with freedom..

Peace… When you have never known a thing except to dream, it becomes more than a talisman.

Although fans have loved this series for generations, the latest revival has been in form of an audio book read by Rosamund Pike who also features as Moiraine in season 1 of the Wheel of Time series on Amazon Prime. So, you have variety of platforms to pick your way of enjoying this fantastical world.

An epic tale of eternal struggle between light and darkness and beginning of journey for heroes who must become heroes and save the world….