There is something with Mahabharata that it is near to the heart of many Indian (and those who truly explored Indian literature) souls, that it was told and retold and retold, many times; without loosing its charm.

Retelling Indian mythology is a trend these days. Of course, it is not an easy task. You cannot woo the readers unless you are having an interesting way to tell (or shall we say re-tell?) it. Some authors tried it nicely and the most successful of them is Amish Tripathi. He first wrote three books in Shiva trilogy series:
1. The immortals of Meluha
2. The secret of the Nagas
3. The Oath of the Vayuputras

And then started working on Ramchandra series:
1. Scion of Ikshvaku

We are however going to focus on the Mahabharata and we can recall a book named Jaya : An Illustrated Retelling of Mahabharata by Devdutt Pattnaik. In Gujarati The Mahabharat series by Late Harilal Upadhyay (a set of 7 books) is interesting too.

Adding to the list here come the latest book in same genre by debutante author Deepak Kaul. He comes up with a book named Corpokshetra: Mahabharata in the MBA Yug. His vision is pretty clear, he wanted to present a light read to the readers who enjoy reading it. 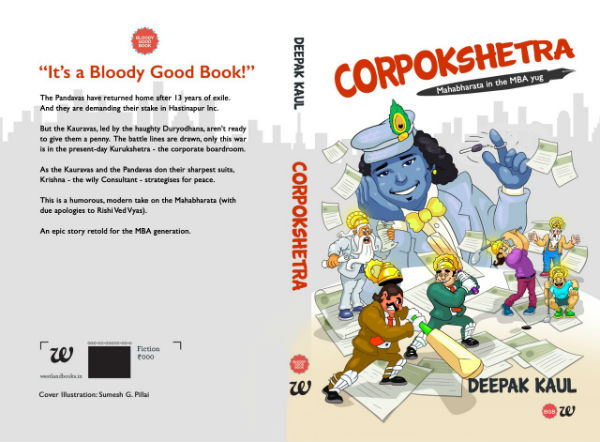 The book cover reflects the book genre and content interestingly. As almost every reader know the content of Mahabharata from beginning to the end; so there is nothing in the book which is not predictable, in terms of content in the book. But, the way it is told should be reflected on the cover. And, we can say that the designer did it pretty well.

The original tale is well known. Deepak have tried weaving it interestingly in corporate world. Hastinapur is a business empire, rather than being a kingdom here. Bheeshma have single handedly rose this empire and bring it to the ultimate heights which it is seeing these days. Duryodhan actually runs the empire despite of Dhritarashtra is at the chair. Pandavas are now came out of the exile where they had to work for NGOs only, and claiming back their rightful. To approach their claims properly they have hired a consultant – Krishna; who excels in negotiations and closing the deals with having 100% track record.

We know that Duryodhana is not going to give up what he consider his own. And there will be an inevitable battle at the board room. Hastinapur empire have many boardrooms but the biggest one is Kurukshetra, which is suitable for this long lasting (precisely 18 days) war of words (and then golf and cricket!).

Rest of the stuffs is better to explore by reading it.

The author belongs to the world of business management and he knows his area pretty well. His expertise in the field is quite evident in this rather fun-at-the-heart novella.

Krishna wished the Board had consulted him at the time. It would have avoided a lot of trouble in the future. This was a perfect example of why companies should not proceed without taking advice from consultants.

Facts are facts. They are like karma. You cannot challenge them.
OR
Things should be decided where it mattered most.

And there are philosophical stuff too:

It was at times like these that Karna was caught between the devil (Duryodhana) and the deep blue sea (Krishna, the ocean of knowledge).

Krishna was judicious in not using words and phrases such as “failure” or “less than satisfactory results” or “not the desired outcome” because such terms are not in the lexicon of a consultant.

All is fair in love and war, and Krishna knew quite a bit about both.

“Well, we will have to bend the rules a bit. Not as hard as bending a bullet though,” said Krishna mischievously.

Dhritarashtra had probably been insensitive to the loss of an offspring considering he had so many.

Just as the water in a deep pool is warm on the surface and cool at the bottom, Dhritarashtra was at once warm with joy and chilled with sorrow.

“I have nothing to live for, Mamashree. I see the prosperity of the Pandavas and it causes me immense grief. I feel helpless and useless every time I compare my net worth to theirs.”

It was all a very messy business. The news channels and media had a field day. Prominent journalist Baarish Bhatt did a special one-hour segment on the whole fiasco, ending with a panel discussion on the frisson in the Kuru clan and the impact on the future of Hastinapur Enterprises.

Something is clicked in your mind when you read the name of the journalist?

Duryodhana had howled with frustration, “Pitashree, you had promised that achhe din aanay vaalay hain. Now what are we going to do?”

We are sure you will not miss the punch here… 🙂

“What has killed your appetite and thirst? Don’t worry, beta. Every cricketer goes through a bad patch. Just get a fat fee to promote a shampoo or cola or both, and you will start hitting centuries again.”

In these lines, said by Dhritarashtra to Duryodhana, you got the point right?

and in this one too.

But everyone was acutely wrong, just like weather Apps fail to predict hurricanes.

The famous नरो वा, कुञ्जरो वा idiom is represented as:

“Gurudev, I am sorry to inform you that Ashwatthama has suffered grievous injuries,” and then coughing loudly into his hand, “to his ego,” finished Yudhisthira.

Also, it is tough to setup the stuff in Indian environment, talking about sports, and not talking about Cricket. Both Bheem and Duryodhan are offensive batsmen. And they prefer the things should be decided in the ground. Bheem was keen to beat Duryodhan in the ground since his early age.

“True-blooded sportsmen do not resort to Boardroom tactics. We should just challenge them to a T20 match and take all ten wickets. Then I would love to bash their bowling and score a double century. However, honestly, I’d much rather break that evil Duryodhana’s legs with my bat.”

And it doesn’t end here. Even the entire “Abhimanyu’s brutal killing” episode is written in the cricket arena.

They are so many such twists and link I am tempted to talk about, but will rather not spilling more beans.

The author have a target audience in his mind, and in terms of writing he have successfully created a good read for it. The dialogs are written in today’s language and young readers will be driven by it, very easily. The author is highly inspired by Dr. Shashi Tharoor’s book, The Great Indian Novel and he acknowledges it along with some other books based on the Mahabharata.

The author have hit the bull’s eye at most of the places, but there are some misses also. And, yes we are not considering the plot related misses, because when you modernise a mythological tale, your views and my views can be different.

Bhishma tried to cheer him up by giving him a discourse on politics, which later came to be known as Vishnu Sahasranama.

In the below mentioned segment, the spelling of “Khandavprastha” misses an “n”.

And did not heed Arjun’s attempt to stem the downward spiral. The only saving grace was that since Khadavprastha was a land-locked state, the loss of a yacht meant the 4-sail schooner that Yudhishthira had painstakingly put together in a bottle. It still hurt because he had spent almost all his spare time, and nearly become myopic, trying to build the ship.

The book is comparatively smaller and we consider that best purchase price of the book is below (or equals to) INR 100.

At the end of the book, the author have summarizes the entire tale pretty much nicely in the form of lessons to learn from the Epic of Mahabharat. And we agree (and are sure majority of readers will too) with all the listed ones.

Remember the movie “Jaane Bhi Do Yaron”? Did you like it? Did you like the Mahabharata scenes in that movie as well? If your answer is yes for any of these questions, you are definitely going to enjoy the book. In this retelling of Mahabharata the fun is as center and you have to read it with that perception only. If you are looking for light reading material which you can read with open mind, you will definitely like it. And yes, some smiles on your face are expected to be seen when you are reading it 🙂