Anand Neelakantan is a popular author from India. He is especially famous for retelling the ancient Indian literature from the vanquished’s perspective. The historians and bards are accused of representing the story from the winner’s perspective. That is found correct to some extent.

No one knows the absolute truth. And, everyone has his/her own truth. That is the plural liberal philosophy – Bharat – that is India, is known for. It follows the culture where you can question anything and to anyone, even to the Gods. And, that is the beauty of the culture. In fact, if not the most precious than one of the most precious books from Indian culture, Shrimad Bhagvad Geeta, or Geeta, is nothing but a Q/A session between Arjun (aka Arjuna) and Krishna. And, in Geeta also, Krishna says:

Ultimately, Arjuna is free to do what he thinks correct. Krishna hasn’t forced him to follow his instructions. It was Arjuna who had to decide and follow his conscience.

In his latest book Vanara – Anand is reimagining the tale of Baali (aka Vali), Sugreeva and Tara as a love triangle from his perspective. The book may surely offend many. Many will see a North-South divide clearly getting a voice in the book. Many consider it an exploration of Arya-Dravida culture divide.

The author justifies his actions at the beginning of the book that he writes the story from the loser (in the battle)’s perspective, and thus, some stuff will be there which not all will agree with. But, if Duryodhana considered Krishna as a God, he wouldn’t have fought with him. The same is correct in the case of Ravana and Rama. So, the book should be read with that consent and aspect.

Now, let us take a look at the book cover.

Of course, we should not judge a book by its cover but we cannot deny the influence of the cover page on many purchase and/or reading decisions. 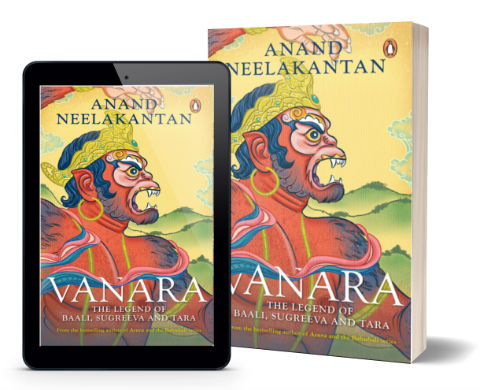 Vanara: The Legend of Baali, Sugreeva and Tara by Anand Neelakantan | Book Cover

The cover designer had various options here. Being a love triangle it can show 3 Vanaras (2 males and 1 female) and a well-built city of Krishkindha (the book mentioned it as Krishkinda) in hilly terrain. The designer, however, wisely go for only one vanara figure – that too a side pose of his face. And, yes, he didn’t forget putting-on a crown on his head. The illustration goes really well with the book title. The designer has chosen cheerful colors and thus the cover page is really eye-catcher. Full marks for the cover page.

Ahalya, the much younger wife of sage Gautama was living with him in the deep forests. Their ashram used to take care of orphans also. Baali and Sugreeva are among those kids. Sugreeva was fearful and fragile and Baali is exact opposite of him in terms of persona. Ahalya was into adulteries with Indra, the king of Gods. One day Sugreeva entered the room when Indra and Ahalya were enjoying their personal moments. Indra scolded Sugreeva and make him run for his life.

Sugreeva couldn’t digest this adultery. He wanted to inform Gautama about this stuff. He was warned against it.

Then things took an unexpected turn from this point and the world of Indra, Ahalya, Baali, and Sugreeva took a 180 degree turn.

Baali and Sugreeva became legendary fighters with exceptional skills. Baali became almost invincible. They meet Tara in their early days and then back during their youth. Both of them fall in love with her from a different perspective. Taara also came to know about their feelings.

But, how did Baali, Sugreeva, and Tara grew-up? How was the city of Krishkidha (or Krishkinda) came to existence? How the tribe of “Vana Nara” (referred to as Vanaras) who was happy living a life in the jungle, like nomads, decided to settle down in a planned city? How are Hanumaan and Nala are related to this story? Answers to all these questions answered in this dark book. And yes, we meet many characters in this journey, including but not limited to: Riksarajas, Baali, Sugreeva, Tara, Sushena, Prabha, Ruma, Nala, Hanuman, Matanga, Indra, Ahalya, Gautama, Rama, Sita, Ravana, Vibhishan, Mayavi, …

First thing first, as said earlier, read this book only if you can read with an open mind. The narration style is way similar to the author’s other books, especially, The Rise Of Sivagami.

The book has some interesting points. What you will like is the way the lifestyle of Vana Nara is explored. They are not well-cultured and groomed. But, some of the elements of natural living will amuse you. Of course, there are always two sides of each life-style and that is also explored here. I found it interesting that the Vanara tribe used to measure distance in “how many songs away?” units.

The author tried to weave various narrations of Ramayana (especially, the segments related to Baali, Sugreeva and Tara’s lives) in this fictional retelling. For example, there are mythological tales about the births of Baali and Sugreeva, considering them sons of Indra and Sun. In some versions of Ramayana, popular in the southern part of India, Sita is referred to as Ravana’s daughter, Jatayu and his brother are not divine brothers of Garuda, the eagle of Lord Vishnu, and much more. In popular versions of Ramayana, Nala was always found with his twin brother, Neel. The character is missing from this book.

The author has tried talking about the difference of opinion and the divide between well-cultured and living-in-natural-ways people in various aspects. Be it the conversation about “Sanskrit – Prakrut” as languages, Jallikattu as a sport, farming as a way of living and earning food utensils; to name a few.

Also, if you are grown up with reading and/or hearing (and watching on TV – the famous Hindi serial – Ramayan) Ramayana, you will find it disgusting to know about Sugreeva’s ploys to keep Baali and Tara away from each other, Ruma’s uncontrolled adulteries, Ahalya’s adulteries with Indra; and other stuff. You may find the shades of many Hollywood and Bollywood psychology thrillers in the characterization of Sugreeva.

If you can digest all these stuff, then the book has some fantastic literary qualities.

Some conversations are really elaborative and you will find the reasoning of the author quite logical. As the author said in the book, it was he who represented his thoughts through the mouth of characters. Here are a couple of such

The book has some interesting one-liners:

The book has many scenes where natural beauty is explored in an engrossing way. While reading those detailed explanations, you will almost feel that you are watching the scene in front of you. But, that is not the only thing. Even some short descriptions are quite interesting and convincing:

Some of the lines of the book will remind of some recent contemporary happenings and some will remind of ages-old problems. The question about women’s dignity is a hard-hitting point. At the same time, “the people who cannot even raise their voices a little louder feel so powerful when in a crowd that they can easily kill a victim”; is something which was, is and will remain relevant.

The book has some fun-infused lines too. There is humour and there is sarcasm for you. It works as a reliever in this otherwise heavy story. Here are a couple of examples:

There are some wisdom lessons for every reader:

As I love reading books, I like the following lines in the book, and I am sure, all enthusiastic readers will like them too 🙂

She was fascinated by the thought that ideas could be frozen in words and retrieved again and again for later use. Books were magic. It was fascinating to think bards who died thousands of years ago could speak to you through written words.

If you ask me for the line I liked the most in the book, I will settle for the following:

…there was no need to hunt for evil, it resides in every heart just like God.

While I’ve tried keeping all the spoilers at the bay where possible, some of them couldn’t have escaped a mention. The quotes above will definitely give you an authentic idea about the quality of writing in the book. The way the characters are explored is something you will love reading. The pain of Riksharajas will remain with you even after you complete reading the book. He deserved a better treatment then he got from the society.

You may complain that the author was needed to use words like “burst” instead of “blast” (and many other such replacements). But, that is the author’s domain and that is how he wanted to represent the things. I think so.

Overall, a book that you can read only with an open mind. Characters of Ramayana and Mahabharata are so engrossed within a traditional Indian mindset that various stuff in the book may offend you. There are places where you think that the author has crossed the lines. In terms of literary aspects and thrilling moments, the book is nothing less than a well-scripted thriller movie.

We are planning to host a “book giveaway” for this book. Please let us know your thoughts and help in deciding the same.

Previous: An Interview With Pradeep Govind | The Author Of I, Duryodhana
Next: GiveAway 8 : December 2019