Home / Books / Vishwadarshan: A Glimpse of the Universe | Book Review

Vishwadarshan: A Glimpse of the Universe | Book Review

The mankind has achieved so much. But still, there are so many that are unknown to us. And, the list of these mysteries is really long. Some of the questions that are always in the back of our mind includes (but not limited to):

The list can go on and on and on…

The curiosity to find answers to these questions may lead us to various belief system and eventually to a cult and then a religion. The final destination probably is knowing – Dharma (there is no synonym for this word is English, unfortunately).

Most of the people consider the practices to find answers for these important and unanswered questions, the spirituality.

Well, spirituality is much more than that. But, for a layman it is about to know the supreme being and his/her way of working. Everyone is entitled to have his/her opinion(s) about it. As, one’s spiritual journey can be walked by oneself only. Of course, a guru can guide you, but, you need to walk the path and beyond.

We are fortunate to get a chance to explore many books talking about spirituality from different perspectives. Here are quick links to some such books and our views and review for the same:


Adding to the list is Vishwadarshan: A Glimpse Of The Universe. It was originally penned by Mahatma Ramratna Thapaliyal in Hindi. What we are going to talk about is an English translation of the same by Rupa Srikumar and A K Srikumar. The review copy of this book is provided by Fingerprint! Publishing. The review is unbiased and uninfluenced by all means.

Like everything else, we human beings do seek beauty in spirituality too. So, no wonder we seek for the same in the book cover :). Of course, we must not judge a book by its cover. But, we cannot deny the influence of an attractive book cover on our book picking/exploring and eventually reading decisions. 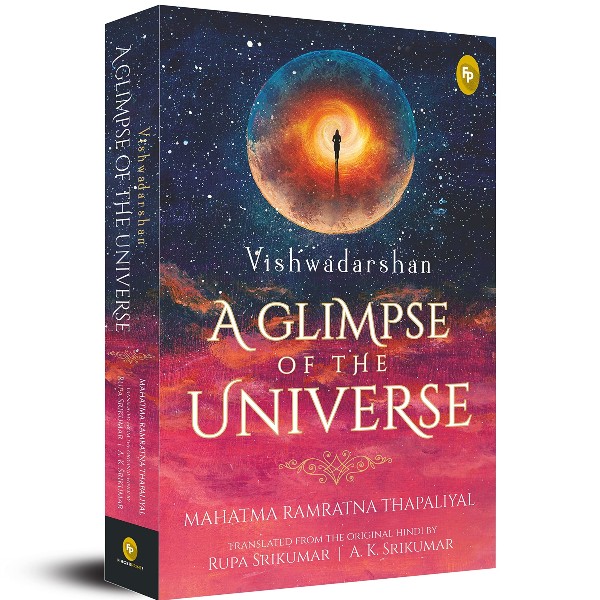 Vishwadarshan: A Glimpse Of The Universe By Mahatma Ramratna Thapaliyal Translated from the Original Hindi by Rupa Srikumar and A. K. Srikumar | Book Cover

As you can see, the cover page of this book is really eye catching. It reflects the book title – Vishwadarshan – glimpses of the world (explored in the book as the broad concept – “glimpses of the universe”). The blue color adds the depth and vastness to the cover. The blue is also dark blue – indirectly reflecting the absence of light and dark matters and blackholes existed in the universe. Of course, there are sparkling stars also. The saffron-to-blood red-to-dark red colors of the planet reflects the light. Overall, a well thought and appealing cover page that remains true to the book.

The Book And My Views And Reviews For The Same:

The book is originally written in Hindi by Mahatma Ramratna Thapaliyal. The translators (Rupa Srikumar and A. K. Srikumar) are introduced to this work by Subbu Kavasseri. The translators seem very inspired by this work and they’ve decided to translate in English, so it can reach to vaster audience. Considering this, it is obvious to find some sentences in the book reflecting the constitution of the same in Hindi, rather than native English. This adds the flair of the original stuff to the book.

Spread over in 23 chapters this book is a little heavy (but not boring at all) stuff. It is for those who seek knowledge and don’t read just for time pass. What made us more curious to explore the book in depth is the following line from the initial segment:

Not one word has been written that has not actually been experienced.

While book draws a fine line between the spiritual and scientific aspect, it delves into both. The author has tried to explore spirituality and science in a balanced manner, and more importantly, from a layman’s perspective.

To reflect the same, you can find sentences like the following in the book:

All living beings toil lifelong to fulfil their needs. This is the “battle for survival”, so to speak.

The real existence of each one of us is that influence of consciousness.

The author has busted many myths and explored the reality from the neutral approach. As we often love to refer humans as – social animal. The author says (with example) that humans are not the only species who live/work in a social formation:

Monkeys, too, are socially and politically organised for meeting their requirements. So are grasshoppers and ants. …

Thus, “consciousness” and “sense of purpose” are very important in the activities we do. This is a very practical and important lesson to learn.

The author has mastered the art of delivering some gem of lines which are meaningful and guiding yet simple, containing the right words that amaze the reader.

In the dark of night, humans and many other beings come under the spell of slumber, and become unconscious.

The concept of “Adi Purush” is misinterpreted by many. When someone refer “Purush-Sukta”, if he/she don’t understand the lines proper, he/she may consider it as a representation of “caste system”; which it is not. We call the nature – Prakriti – as it is fertile and gives evverything we need, for our existence. The author has elaborated the concept of “Purush and Prakriti” and how their union leads to the creation, interestingly:

The entire universe is structured in this way, using Maha-sukra and Maha-raj components. The ‘Maha-Sukra’ is considered to be purush )the Supreme Being) while the ‘Maha-raj’ is prakriti, (the primal, natural state.

In fact, there is an entire chapter focused on “Creation of the Universe through union of Purush and Prakriti”.

One more thing I like in this book is, it also talks about the preparation a seeker has to put his/her efforts in.

For a glimpse of the universe, mental growth is first required, and thereafter the mysteries of the world need to be understood for experiencing supreme bliss.

Of course, to achieve something great, one has to put great efforts also. And, just efforts are not enough, the abilities and skills do matter. One must need to put in conscious efforts to develop the same. As it is said in the famous Sanskrit Subhashit:

The author goes ahead and re-affirms:

If there were no vision in the eyes they would be blind, even in sunlight they could neither comprehend the appearance of images not discern level-undulating land, rivers, mountains etc. Likewise, if the intelligence is not illuminated, then even in the effulgence of the supreme consciousness it cannot gain awareness of the universe’s actual mysteries, and consequently living beings get embroiled in all the sufferings and anxieties of the natural world.

The author has touched the concept of time as well. Of course, based on whatever you’ve explored about the concept of “time” so far, through study of science, in your academic career; you may agree or disagree or partially agree with some elements. But, the exploration is done from the “scientific and spiritual” perspective. And, author is more interested in explaining the things in a simple manner.

In the same regards you may also want to explore the chapters about:

The book also tries to bridge the gap between science and arts. And, if you are a reader who love such kind of hypothetical linking, you will enjoy those segments. Here are a couple of lines from one such discussion:

Worldly knowledge – science develops through literature. Literature is derived from culture. Culture is formed through refinement. Refinement arises in living beings. The gross body of a living being is caused by semen and female discharge…

The author goes ahead and even compares literature with human body too:

Like the four major organs of human beings – head, hands, feet, and torso, literature also has four main portions which are – devotional essence, heroism, romanticism, and compassion. Together these constitute the poetic essence.

The quotes from the book must have given you a fair idea about the kind and quality of writing you can expect from the book. Such books require re-readings. Also, at places you need to keep your mind open and try to absorb the author’s perspective. You can then logically analyse the stuff and find the essence of the same.

If the book has entangled a few stories to explain the things, it could have been a lighter read. But, it could have made the book larger in size and may have added “un-wanted” (from the author’s perspective) tracks in the book.

Overall, an informative and spiritual book that tries to explore the universe and what we know about it form the scientifically spiritual perspective. Not for time-pass reading. It holds essence of knowledge which may require multiple re-reading sessions.

Previous: How to Become a Better Writer By Anishka Verma | Book Review
Next: Startup Lessons from Zomato By Ashish B. | Book Review