We love to talk about genuine books in self-help, motivational, inspirational and spiritual genres too. Here are quick links to some such books we talked about in the recent past.

Adding to the list, today I am going to share my unbiased views for a book named Inner Space. This book is written by Renji Panicker, a Software Engineer and entrepreneur. Currently, he works in Pune as a GM of a robotics company. The book contains some illustration (basic level) drawn by the author himself. This book is published by Leadstart Publishing. We are thankful to the publisher for providing us the review copy.

Being responsible for making the first impression of the respective book, the cover page plays an important role in a lot of purchase/reading decisions. 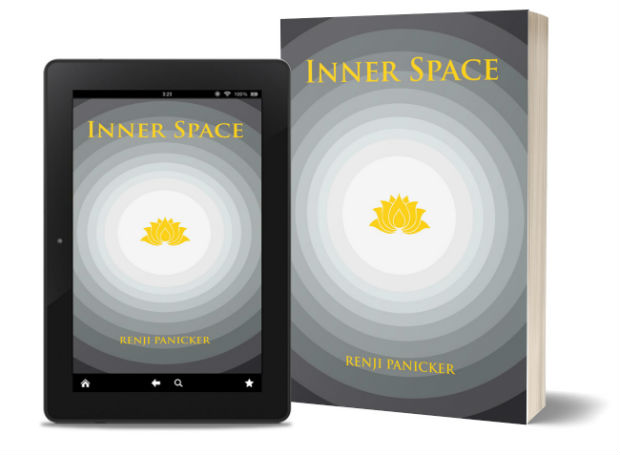 Cover Designer Ashwini Jadhav has decided to go with the minimalistic design for the cover page of Inner Space. The page uses inner-to-outer circles containing the shades of black. It represents various chakra and growth from within. In the center of this design, you can see a yellow lotus. It is thoughtful, however, not very appealing.

The Book And What We Think Of It:

Usually, we talk about a book in two distinguished segments focused on the plot of the book and our views about the same. The nature of this book is quite different and thus, we are merging both these segments here.

The content of the book is distributed into 7 segments. One thing, I must note that the book is a rational study, or rather I should say, a collection of thoughts and personal experiences. The author clears it at many places that so and so explanation or elaboration is based on his personal experience/deduction. This honesty makes the book more worthy. The author’s scientific background keeps the book falling in the superlative spiritual genre. It is rather realistic and
thus the reader(s) can connect with it very easily.

I am not a religious person, but I am spiritual.
I don’t believe in God, but I believe there is something out there.
My scientific background does not allow me to believe in gods.
Who am I?
What is the purpose of life?

So, you can see, he is trying to find answers to the question ignited in his mind. Actually, such questions arise in anyone’s mind who tends to think logically, and not engrossed to much into just material happiness.

The initial segment of the book makes interesting discussions about “Objective” and “subjective”, things and methods of study and evaluation. And when he says:

I became convinced that there is more to life than what we see and experience objectively, that the spiritual question had to be internal.

You tend to agree with him. He also shows his respect for Science and defines a relationship between Science and spirituality.

While science deserves all due respect for improving our material lives, it has no role in an individual’s spiritual quest. There is nothing in spiritual study that can be, or even needs to be, objectively demonstrated. Science serves humanity to the extent that it improves our material existence, but to find true meaning and purpose in life, we have to go beyond.

Continuing the Scientific-Spirituality approach, the author talks about “The Fourth Dimension”. While 2D and 3D are comparatively easy concepts to understand as we are growing up in a world where everything is set up in 3-Dimensions. So talking about the 4th dimension is interesting and challenging both. It is very difficult for our minds to understand the things they cannot imagine easily. The author talks in detail on this topic with illustrations and examples. You may need to read it a few times to absorb his thoughts. He also mentions that the popular (mainly through recent movies) theory of “multiverse” and how it is different than the fourth dimension. The flatland theory is also elaborated here. The author tries to explain things with simple examples:

In the same context, the author says:

Spiritual awakening is the process of reawakening this dormant faculty within us through meditation, and breaking through the limits of perception that constrain us to this three-dimensional universe.

In very similar aspects, the book has a discussion on – Virtual particles. The author also touches the concept of – Divergence.

A large number of people conclude “Dharma” as mere “religion”. However, Dharma is much more than that. It is a way of living (again, much more than that). Thus, when talking about Bharatiya (that is Indian) culture, scriptures, way of living and other aspects, they refer to it as “Hindu” way of living/scriptures/… Actually, the Dharma, in true sense, is timeless. And thus, our scriptures and ancestors found the perfect word for it as – Sanatan Dharma. The author has gone in detail of this analogy and talked about Hindu Word – Sanatan Dharma – Aryans in simple words and few lines. The book keeps using the word “Hindu” throughout, for easy understanding of the reader. It is a positive aspect of the book.

I cannot stop myself from mentioning the reference of “the Frogs” story – told by Swami Vivekananda in his remarkable and historical Speech at the Parliament of World Religions on 15th Sep 1893.

I also like the way, the author has elaborated the Mahabharata war and the characters Arjuna, Pandavas, Kauravas, Krishna, and others through a symbolic explanation. It opens a new perspective to look at – The Mahabharata.

You can find many quotes about Hinduism and the philosophy and great logic hidden behind each ritual and tasks. Here are one of them:

Hinduism gives great importance to the use of fire, or agni, in prayer and religious worship…

Actually, you need to read it in the context of what it is written for, to understand it better.

I also like to include a special mention of the discussion about the concept of time and how ancient Indian scholars understood it.

Hinduism has the most extensive study of time, describing time units and measurements with exact precision, ranging from a millionth of a second to trillions of years. But more important, Hindu philosophy is a strong proponent of the cyclical nature of time, that the three-dimensional universe is repeatedly getting created, sustained and the destroyed.

In the last quote above there is a proofreading mistake (I instead of 1 is printed in above block).

The concept of God and Hindu perspective is elaborated quite nicely. The book also illustrates the philosophy of वसुधैव कुटुम्बकम through various mentions. The author beautifully says that while all other religions try finding God in the outer world, only Hinduism explains that it is “within” us.

When Hindus pray to their gods, they are worshiping ordinary humans who rediscovered their divine identities. When Hindus meditate, they reach out to their own divinity, within themselves.

And he refers some fantstic lines:

The discussion about, how during evolution, the mankind slided towards selfishness from selflessness and how it is harmful, is written interestingly.

… selfishness became an important survival instinct, which in turn gave rise to the ego. This selfishness resulted in humans forgetting their divine nature and focusing on benefits for the material body.

The author elaborates on the story of Dashavatar as the symbolic story of the history of Earth and species. You can read more about it at:
The Beginings | Bharat Ek Khoj Hindi TV Serial On DVD | Personal Reviews

In the same context – the author refers “Balrama” as one of the Dashavatars, that is different than the popularly accepted list of Dashavatars.

The book also brings in some practical advice for the readers and reaffirms that fact the one cannot use/consider spirituality as a way of escapism.

You cannot go through life imagining that there is a God who will solve your problems or grand you access to some place called heaven. That will never happen. There is no one with any discretionary powers to decide your fate. You get what you deserve, not based on what you pray for, but on what you work for.

I think, all the readers will find the two stories given at the end of the book, one of the most interesting parts of the same.

By now, you must have got an idea about the quality of writings and linguistic attributes of the book. It is balanced in science-spiritual aspects. If you can read it with an open mind, it is a really good choice.

A spiritual book about self-awakening. Not for everyone. If you like this genre, you should go for it. It is not for the timepass. You need to pay attention and you may need to re-read it to get the substance of it.