Swami Vivekanand or Swami Vivekananda was born as Narendranath Datta (shortened to Narendra or Naren) in Kolkata (then Calcutta). Since last few generation he is viewed as an inspiration, especially by Bharatiya (that is Indian) youth. His iconic speech in Chicago, his dedicated work and efforts to spread the “Ramakrishna Mission” are iconic and remarkable. His life is nothing less than a legend. He is known for his will power and incidents from his life are seen by the youth as as “life lessons”.

Pranay, an author from India (that is Bharat) has recently penned a few books in “Spirituality for Leadership and Success” series. In this series he represented his analysis and views for “how to learn Leadership lessons from various ancient Indian scriptures and lives of various prominent figures”. We found the concept interesting and with the hope that these book enlighten some of the interesting aspects of ancient Indian literature, we have started reading books from this series.

Here are quick links to his books in the same series we’ve reviewed so far.

Recently I got a chance to read another book in the series “Vivekananda: Spirituality For Leadership & Success” by Pranay. Actually, this book review was planned to be published on some other date, but, what could have been better than the birthday of “Swami Vivekananda” (12 January) for the same?!

By the way, we are thankful to “Fingerprint! Publishing” for providing us the review copy. The views and reviews preseented here are uninfluenced and unbiased, as always.

Of course, we shouldn’t judge a book by its cover. But, the cover page is responsible for the first impression of the book. It also helps the book to stand out while put in display along with many other items. Without a doubt, an attractive cover page attracts potential readers towards it. 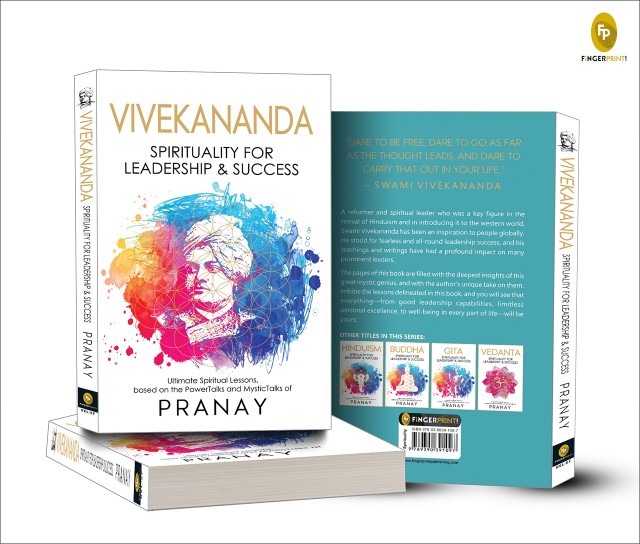 Like the other books in this series, this one also has a white background, reflecting the vastness and clarity – the spirituality – brings in.

The middle section holds an illustration of iconic pose of Swami Vivekananda surrounded by colorful artwork. It is really appealing and eye catcher. Definitely a well designed cover page that remains true to the book content.

The Book And My Views For The Same:

Usually, we talk about a book in two separate segment dedicated to the book content and our views and reviews distinctively. The nature of this book is quite different. So let us merge both these segments here.

I would love to start with a quote from the book, that summarizes the life of Swami Vivekananda, beautifully.

Vivekananda bridged the ancient and the modern, the East and the West. He was a spiritual warrior.

Leadership is all about attitude. While there are billions of people currently living on the planet, we remember only a few of them. Why? Because, they have made the impact. Consider how many people have lived on the earth during the last few hundred or thousands of years? And, yet, the list of people who made an impact on mankind and its history and “then future”, is small. If we remember Vivekananda even after this many years of his death, his life must have made an impact we cannot ignore right?

This feat could have been achieved by him with his leadership qualities.

In this book you find some practical rules of leadership that are reflected in the life events of Vivekananda.

Don’t Get Restricted by Ideologies

His message is to expand our horizons, beyond ideologies or creeds.

Infinity Is Your Inner Being.

Faith is magical. It can make people move mountains.

People May Not Be Happy with Visionaries!

Without peace, success is very superficial.

Do the Essential, Drop the Unessential.

Realize Your Own Worthiness (Atma-Mulya).

Give from Your Heart.

When you have a clear vision about your goal and the possible path you should take, it would be unlikely that you won’t achieve it. I remember reading incidents from Vivekananda’s life in my early childhood. The one thing that stuck with me is the incident reflecting his curiosity and clarity of thoughts at a very tender age. He was looking for someone who can guide him in life and his question was very specific, Have you met the God/Goddess? Can you make me meet him/her? And, he found his Guru – Ramkrishna Paramhans – whom he followed thoughout his life.

The book could have included more incidents belong to this Guru-Shishya duo and even from the life of Vivekananda. According to me, this is a downside of the book.

The following lines of the book reflects the impact of Vivekananda’s thoughts globally. As a matter of fact, this philanthropy drive is running in full-throttle.

The whole tradition of American philanthropy which was started by John D. Rockefeller, was actually influenced by Vivekananda.

And following Rockefeller’s example, great American entrepreneurs such as Warren Buffett and Bill Gates continued the tradition of giving back their wealth for the good of humanity.

One very important reason why great world visionaries, leaders, and luminaries such as Jamsetji Tata, John D. Rockefeller, Emma Calve, Sarah Bernhardt, and others were deeply attracted to Swami Vivekananda was because he used to constantly tell people that his method is not about a particular “ideology” or a particular belief system.

The author, also didn’t forget to include quotes from other remarkable human beings ever walked on the earth.

In fact, Gautam Buddha also used to say that our consciousness shapes our world.

For those who are looking for leadership lessons, the author has mentioned them in just a couple of lines.

There are three essential power principles for leaders that Swami Vivekananda can teach us. The first is courage. The second is faith. And the third is strength.

And if you want to explore them in depth, with relevant references, you can find them spread over the book. Here I am quoting some of them:

Vivekananda used to emphasize the old Vedantic teaching that infinity (ananta) and endless power (asheshbal) are what comprise your inner being. And to know that truth is really to know yourself.

Vivekananda talked about atomic theory in the pre-atomic age. He was so advanced in his thinking. Renowned figures such as Sarah Bernhardt, Emma Calve, J. D. Salinger, and others were great fans of his.

Vivekananda used to say that the true person of spirituality is one who can welcome all circumstances within his or her life.

One of Vivekananda’s most crucial teachings was to make people realize their own self-worth (atma-mulya).

In this book, the author tries to look up for the “leadership” qualities that lead to success from a spiritual perspective. Thus, discussion about consciousness and other abstract aspects is expected. The book talks about the “warrior” mentality to overcome the possible hurdles the life can bring form you.

The Mightier Warrior is in a Higher State of Consciousness.

As Krishna tells Arjun, the true person of knowing is one who’s very way of walking, way of talking, way of functioning, changes. So too Vivekananda was trying to make people ‘know’ or be acquainted with their own higher self, which resides in the interior of their own existence.

And, while exploring the lessons, the author doesn’t shy away from using direct words.

In fact, being creative is the art of expanding. Otherwise, we remain very superficial. We remain content with what we are and what we have.

The book also refers quote from other remarkable people like the founder of IBM, Thomas Watson Sr. and others. The author also knows that the life must have been taken seriously, as we get it to live once only, but, if we become serious in living it, we cannot enjoy our journey. And, Swami Vivekananda believed in the same as well.

Vivekananda strongly believed in the concept of leela which Krishna describes and exhibits through his divine avatar.

When you are caught by fear, the clarity of your vision would be affected and thus the decisions you take may not be the right ones. A leader cannot afford that. The following lines in the book can be used as guidelines during those circumstances.

It requires tremendous courage to give from the heart, but it is simply a question of adjustment in attitude.

Most people spend too much time fighting with their own emotions and their own selves.

The above mentioned quotes must have given you a fair idea about the content of the book and its quality. To me, it is a book worth reading. Of course, you will miss some popular quotes from Vivekananda and you feel that many more incidents from his life could have been included here. It could have been a positive improvement in the book.

This book has a wide canvas, and what you learn from it, is strictly upon you. Rather than spending time watching/reading something meaningless, it is better to invest your most valuable asset, your time, reading such meaningful works. And if you are looking for only one sentence leadership lesson from Swami Vivekananda, just remember what he said:

Arise, Awake And Stop Not Till The Goal Is Reached.

Recently, there were some promotional offers going on for the Kindle edition of this book. So keep looking for such offers, and you may find it at a very competitive price.

A nice and enriching book that talks about spirituality and modern day management. Such books are not meant for time pass reading. You need to run a cycle to re-read and implement the thoughts in actions, to get the most of it. If you plan to do so, go for this book. It is a swift read.

VEDANTA: Spirituality for Leadership and Success By Pranay | Book Review

BUDDHA: Spirituality for Leadership and Success By Pranay | Book Review

GITA: Spirituality for Leadership and Success By Pranay | Book Review

Previous: VEDANTA: Spirituality for Leadership and Success By Pranay | Book Review
Next: Books we want to read in 2022