Startup Lessons from Zomato By Ashish B. | Book Review

Since a few years, the youth (of India specifically) has started following the entrepreneurial path with more confidence. Of course, the root of entrepreneurship are there since the millennia (as we can see its reflection in fables and folklores also), the changing environment, the access to the information compendium, the communication advancements, and inspirational success stories witnessed in the recent times; have surely given a push to this momentum.

From Bill Gates, Steve Jobs, Elon Musk and other’s journey; enthusiasts learnt a lot. And, now we have our own success stories like that of Infosys and others. The Covid-19 pandemic affected positively to many business arenas, and some entrepreneurs took its full advantage. The success stories came out recently includes the rise of Zerodha, Byju’s and others. In the same context, in food-delivery market, the success of Zomato and Swiggy amongst others, is eye-catching.

Do you know that Zomato is started as a side hustle? And now, Zomato and Swiggy owns a large part of food-delivery market in India! So visiting Zomato’s journey would not only be inspiration but also guiding lesson for entrepreneurs, wannabe entrepreneurs and other, right?!

With the same vision, when we came a cross a series of books about “Indian Unicorns” by Ashish B. (available on Kindle Unlimited – to read for free!), we’ve decided to read them and share our unbiased book reviews for the same with our readers. Here are quick links to the same for the previous two books in the series:

At the same time we acknowledge the influence of a book cover on purchase/read decisions. 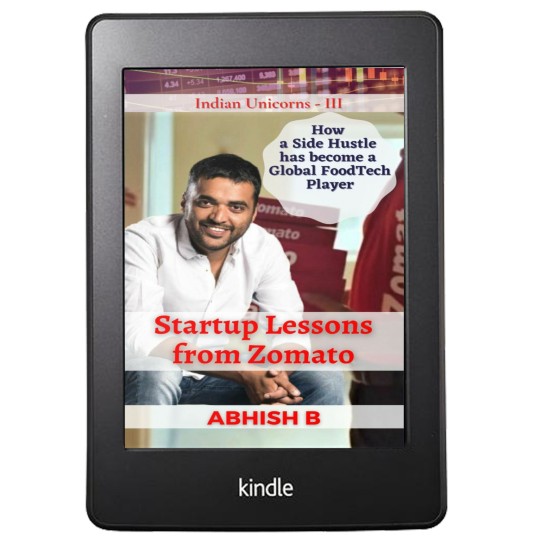 Startup Lessons from Zomato: How a Side Hustle has become a Global Food-Tech Player (Indian Unicorns) by Abhish B | Book Cover

Being a short biography of Zomato founder Deepinder Goyal, this book is expected to show him on the cover page. And, like all the other books in the series, this also follows the same pattern. Interestingly, the cover page reflect the red color theme (used by zomato in its logo). In the background, you see Zomato delivery bag. A moderately good and thoughtful cover page.

Usually we talk about a book in two distinguished segments, dedicated to the book story and our views for the same respectively. Based on the genre of this book, let us merge both these segments together.

Of course, there always is a team behind a successful big venture. But, it is the founder who dreamt of it and has worked his best to give it a form. This is the story of – Deepinder Goyal – the founder and CEO of Zomato. The book also elaborates how he met Kanchan Joshi (his wife) and how important role his friends like Pankaj and others played in this journey.

There are so many unknown things about Zomato we come to know through this book. The most important two lessons according to me is:

In the same context, the author mentions:

… and necessity of a Plan B in life. He did not quit his regular job at Bain but worked on his ‘side hustle’ rigorously during the weekends for over a year and a half.

This is very important, as often, driven by the success stories of many start-up, entreprenuer hurriedly leave their jobs and invest all their efforts, time and resources behind the idea that fascinate them. There is nothing wrong in that, as far as you have a backup plan.

In addition to introduce us to his family the book also talks about his family background. The book also re-affirms the fact that there is no connection between traditional education system (that is implemented to produce the clerks and officers for government jobs – primarily) and the business sense. Here are some lines from the book in the same context:

He was an average student at school and had even failed the internal annual school examinations in the sixth standard.

Deepinder did not even know what the Indian Institutes of Technology were until he had completed his 10th grade at school.

Of course, it doesn’t mean that one should avoid studying! It means, you need to look beyond that and not considering it as the only parameter for your professional journey.

To make sure, why visiting this joruney is important or what kind of important lessons it must have contained, the author says:

Started in 2008 with scanned menu card pictures posted online, Zomato is now a Gurgaon-based unicorn valued at over six and a half-billion dollars, the largest food-tech company in India.

While brushing up your skills and arming yourself with the knowledge, you need to keep an eye on the changing market environments.

Domino’s pizza order-in services were newly available in the Indian market. The process was somewhat cumbersome – one had to call the helpline and verbally place an order.

Find, what they are doing right and figure out what they are doing wrong, or what could have been done in better manner.
Of course, you may fail during your journey and that’s ok. In other words, expect failures at initial stage as you are learning at many fronts of the business. It is all about never giving up on finding the mistakes you are doing and rectifying them.

However, the venture did not take off at all. Deepinder figured that it was too early for the market at the time – people were still mostly on desktops and were not as ready or comfortable with online interactions.

Also remember, initial steps may be smaller and non-noteworthy when you look at them later, but at the point-in-time when they are taken, they are the most important actions. For example:

The first professional restaurant menu that Deepinder and Pankaj uploaded onto their site was that of Hauz Khas in Delhi.

The site, which was initially named foodlet, was later changed to foodieBay.com in 2008 to want a dot com tag.

You will get some interesting lesser known information while reading the book, like, the company used to be called Foodie Bay.

Obviously, you will find details about how and when the company started getting funds, how he finalized the brand/website name and more…

first funding in 2010 and were navigating various legal discussions, it was pointed out by one of the lawyers that the last four letters of the company name stood as ‘eBay,’ which might invite a lawsuit later down the line. Although Deepinder was

So Goyal and his partner went on to an online market selling website names and picked out two options – Zomato for ten thousand dollars and Forkwise for just five dollars.

It is another example of having multiple options open and available for your future. Because, you may have the clarity of what you want to achieve, but as a big picture. Eventually, when you cross one step, you may get the idea about the next possible step, and so on. And the book mentions it clearly:

Deepinder admits that neither he nor his team had complete clarity about where they were headed – it was just about putting one foot ahead of the other and gradually figuring things out on the fly.

When the company grows, you need to make sure that all the employees follow a specific work-ethic-pattern, called work-culture. I found other successful businessmen (like Mr. Harsh Mariwala) also talked about the same in their books/conversations. When you are a small team, the things would be mutual and obvious. But, when you grow, you have to retain it in a specific way.

Another important lesson for anyone who wants to do a business is:

Communication is vital in keeping the clientele engaged on the platform and across social media, as well.

And if you think, the success for food-delivery market is comparatively easy, remember, in India, we always prefer home-cooked food! It is always the most reliable and healthiest option. The culinary systems around the country is a confirmation of the same. Of course, since a few years, with growth in nuclear families, working couples and influence of western-culture, the things are changed. But, to give it an emotional Indian touch is also required. The company brilliantly did it through the following wordplay to disrupt Indian market.

The common sentiment of ‘Ghar ka khana’ is inexorably moving towards ‘Ghar baithe khana’ (Food cooked at home vs. food eaten at home).

The book talks about many hurdles and challenges the company has faced during the journey and even after achieving commercial success. Running a business comprised of facing new challenges on regular bases if not daily. Another, important challenge is, prevent the company from being acquired by other business giants. For Zomato, it is not a big challenge, as of now.

Zomato and Swiggy together make up over ninety percent of the market share in India, leaving minimal scope for acquisitions here.

Of course, there are many more aspects of the journey, attributes of the book and lessons to be learnt from the same; but talking about them would be full of spoilers.

I think, the above mentioned quotes are sufficient to give you a glimpse of the book. You can now decide the quality of writing in it, and what to expect from it, in terms of content as well.

If you like such books and want to read something inspirational, and more importantly want to work hard on your idea by implementing these lessons; this book is for you.

Overall, and interesting and inspirational short EBook. Business enthusiasts will find it interesting. If you are already a “Kindle Unlimited subscriber”, you should definitely go for it.

Zero to Billions – The Zerodha Story By Ashish B. | Book Review

Previous: Vishwadarshan: A Glimpse of the Universe | Book Review
Next: Uncle Pai, A Biography by Rajessh M. Iyer | Book Review