Posted by: Editor 16 days ago in Author, Books, English, Popular Leave a comment

The latest installment of Cormoran Strike series is now available for readers worldwide. Published in 2022, The Ink Black Heart has been on our reading list since the name was declared on the fan platforms.

Written by Robert Galbraith (J K Rowling), the series has been loved by readers and we have reviewed the previous books of the series here at ThinkerViews: 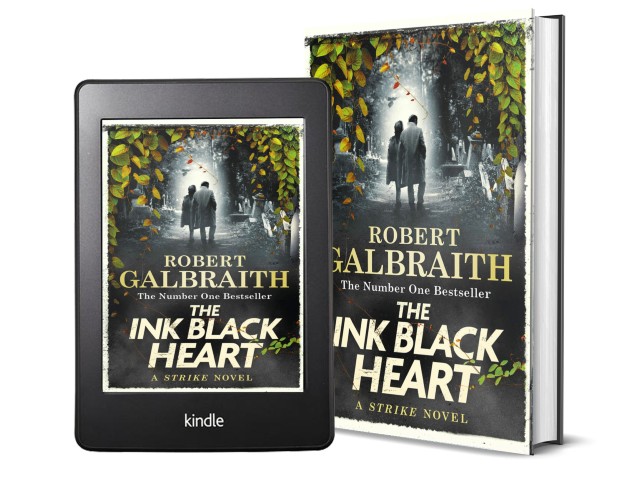 As we have noted before, the signature coverpage for all Cormoran Strike novels features the detective and/or his partner in motion, chasing secrets in dark places. This one is no exception.

We see the detective duo making their way through a dark track in a graveyard, surrounded by rubble, dislodged gravestones and tombs. The black and white background of the cemetery is made somehow more sinister with the poisonous green ivy that seems to take over everything around it.

The story starts on a positive note and we meet Robin and Strike on a celebratory dinner at Ritz. Robin is turning thirty and the detective agency is now established enough for them to mark the occasion with friendly banter and expensive dinner. The evening, however, ends on a jarring note.

While they try to bring their interactions back to normal, Eddie Ledwell comes to visit Robin at the office. Disheveled and harassed, Eddie strikes a compassionate note within Robin. But, as Eddie’s problem is more of a cyber security arena, Robin declines the job. A few days later however, Eddie is murdered in Highgate Cemetery and so Strike and Robin are pulled in to the world of the Ink Black Heart.

Eddie had been one of the co-creators of a successful cartoon called the Ink Black Heart, along with then boyfriend Josh Blay. With time, the cartoon has been turned into a Netflix series and is going towards a movie adaptation. Thus what had started as a fun exercise between friends living in a commune, enjoying happyish life has now turned into a money-making franchisee. Quite a few of the friends from the beginning are left behind and feel resentful.

But, more concerning is how the fan community for the cartoon has now taken a life of its own. Led by Anomie, a few fans created an online game based on the cartoon called Drek’s game – it is like a beautifully animated chat room where fans gather. When Eddie failed to praise the game in one of her first interviews, Anomie started a hate – campaign on social media. Over last few years, it has turned into a toxic vendetta that saw Eddie attempt a suicide at least once. And now she is murdered, the fans are speculating what actually happened.

Robin and Strike’s primary suspect is Anomie, and as they both learn to go through social media output for previous few years from all the intertwined friends and family connections, they keep discovering one secret after another, with no apparent end in sight. The investigation also brings them to attention of far-right movement and they narrowly escape a bomb attack at the office.

To make matters complex, Strike is being threatened by ex-fiancée’s upcoming divorce proceedings, which may lead to negative impact on the business and is hence forced to find more employees to cover the workload, which now also includes finding a fail-safe against Charlotte and Jago Ross.

With everyone stretched, their personal safety threatened and the illusive Anomie always out of reach, Strike also has a secret he has been avoiding persistently for years now. How will it all get resolved?

And the above is just an outline of the widespread cast and characters in this yet another epic instalment that spans over a 1000 pages, become one of the longest books to be published by J K Rowling in the Strike universe. It is definitely not for those looking for a speed read, but for those who enjoy the world of Strike and Robin. However, it is not a difficult read.

In fact, it is quite interesting to pursue the multiple threads when the author gives us the chats between various players of games, as they talk to one another on common as well as private channel simultaneously, thus creating multiple narratives, like they happen in real life.

Every Strike novel has talked about contemporary issues – poverty, homelessness, drug abuse, broken families, young people looking for hope, search for equality in modern days – and this book continues that as well. But the previous books also had the personal struggles for Strike and Robin to free themselves of the past and find their footing and success. In this book, they have found their peace with the personal lives to some extent and the agency is in a good place. The focus of this story is largely on the internet and how toxic it can become when used for nefarious purposes.

It is hard not to feel for Eddie, who has been continuously and viciously targeted through social media, so far that she is inclined to take her own life. J K Rowling has had her share of social media controversies as well and in this book, she creates that world with effectiveness.

The all-encompassing visibility of people who become celebrities, the almost possessiveness of fandom that leads to toxic infiltrations and campaigns by people around successful creators who feel cheated somehow. And worse, the attempts to claim the same level of creativeness and closeness to someone who has died and left all their wealth for family and friends to divide amongst themselves.

It is hard to not feel compassion for almost all characters here that come from dysfunctional families and how these children seek friendship and guidance on internet. Only to get a warped view of the real world from extremist and abusive groups online, whether it is Kosh’s principles or far-right movement or pedophiles parading as friends. No wonder these children will struggle with real world when they become adults. But, through the internet chats, the author also shows us how unkind and bitchy most of the conversations become.

And through it all, Strike and Robin continue to look for patterns, dots to join, that can build the persona of the anonymous entity that may have killed and wounded the creators of what they claim to love. Until the very end, the elusive entity keeps the mask on. In fact, the end sort of takes you by surprise.

If every good idea could be realised cleanly and without delay, investigative work woudn’t be the long, hard slog Cormoran Strike knew it to be.

The older Strike got, the more he’d come to believe that in a prosperous country, in peacetime – notwithstanding those heavy blows of fate to which nobody was immune, and those strokes of unearned luck like inherited wealth – character was the most powerful determinant of life’s course.

There are quite a few typographical and proof-reading errors, which are understandable considering the span of the book.

Yet another enjoyable and intriguing instalment in the Cormoran Strike series..

Previous: Complete Book of Meditation by Shai Tubali | Book Review
Next: The Wrath of the Hellfires by Shatrujeet Nath | Book Review