Exploring the modern take on Indian legends we have been reading Shatrujeet Nath‘s Vikramaditya Veergatha series and we have shared our reviews on the first three books of this series with you previously here at Thinkerviews:

And now continuing with the series, let’s talk about the latest installment in the series: The Wrath of the Hellfires. 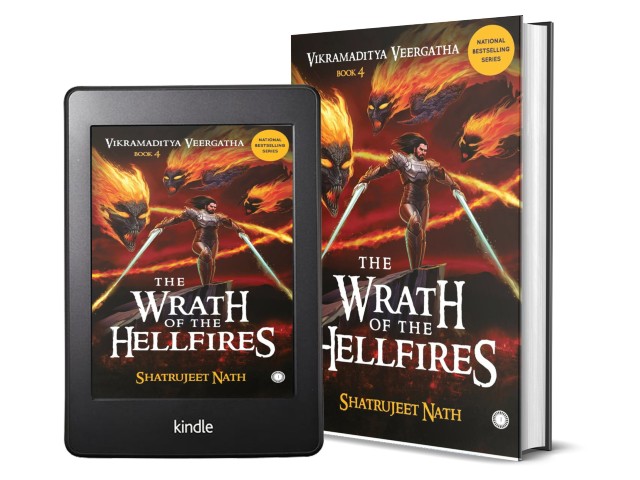 The Wrath of the Hellfires by Shatrujeet Nath | Book Cover

The book cover continues with the theme of modernistic looking warrior wielding two swords – the Hellfires – and the resultant fire spewing banshees (Churails) trailing his wake in the skies. While the face of the warrior is Eastern looking enough, his costume could have come out of a space saga 🙂

On one hand, the cover may appear appealing to western readers looking for paranormal stories. But on the other hand, there is definitely potential for a different cover page that does justice to the complex cast of characters that come to life in this series.

At the end of the third book, we left with the knowledge that Shukracharya knew where the dagger containing the Halahala was and so we expect the Asura attack on the Borderworld as we start this book. The attack is planned for speed, strength and brutality and it looks like the Borderworld will lose to Asuras.

Avanti remains divided and burdened with the external and internal attacks and Vikramaditya has too many fronts to fight at. Even when he gets the message from Betaal and he wants to rush to the borderworld, there is no way for him to get there without Vetaal Bhatta who is still away to the Eastern kingdoms.

But with the help of Dhanvantari, Vikrama devises of a way. And he is accompanied by none other than Matali on this quest. By the time they arrive, the battle is nearing its end, the Asuras running out of time and falling, but still the damage is done and once Vikrama gets the dagger back, they only just reach back Avanti in time, as it is battling with the latest attack – this time by Kinnaras. While the city is devastated by fires, the attack sees the brothers united and fighting together again.

Now that the dagger is back in Avanti, Vikrama charges Varahmihira with its security.

Amongst other threads, we follow the journeys of Amar Simha, Ghatkarpara, Shankubala, Vetal Bhatta and Kalidasa to see what troubles lay in their paths.

Frustrated with his defeat in the Borderworld, Shukracharya now plans the final attack on Ujjayini by the Asuras to defeat the human king once and for all. Secure in the knowledge that the Hellfires will not attack the children of Diti and most of the power of Nine Pearls still scattered outside Avanti, they are fairly sure of their success.

And so comes the final battles with Vyalas, Ahi, Asuras, Devas, Yakshas, Danavas and Humans – what will be the end of these struggle? Who will get Veeshada’s dagger and the Halahala?

This final instalment of the Vikramaditya Veergatha is just as enjoyable as the previous ones and the author keeps giving us lots of action packed adventure along with a few twists and turns to keep it interesting for the readers. We start with the battle in the Borderworld and then continue through multiple attacks on Vikramditya’s kingdom and outside it and the author gives us a reminder of how wars have a way of overpowering all civilised instincts:

War is not prey that anyone can chase at will. War is a predator that hunts us as it wishes.

You go into battle with blood in your head. You come out with blood on your hands. Sometimes, battles teach you more about compassion than any regilion can.

In every war, on every side, it is the innocent who die in the greatest numbers.

And like the previous books, it appears that odds are firmly stacked against Vikramaditya, especially as he has lost a friend and  a brother while fighting this battle. But he does not compromise on his principles or accept defeat. Instead he rallies his troops, shows them that he is still their beloved leader and continues to follow the difficult path and finding ways to help friends who need him.

We might plan and prepare for every eventuality, but life will always throw something at us that we haven’t accounted for. You speak of a fair test of a player’s skill, but life is unpredictable, life is unfair, Yet we play the game day after day, challenging and outwitting our fates, overcoming the odds to win. That is chausar. No matter how the dice roll, the player has to plot to beat destiny, our biggest opponent.

Unlike other kings, he does not only seek subjugation, but sees himself as dutybound to his people, no wonder he still lives in the memories of the people he wanted to serve:

And through Vikramditya and his council, we continue to find that thread of hope and adventure through the story:

If we can’t burn bright as the sun, we can still glow like the firefly. For it is not the size of the light but its intent that dispels the darkness.

We mustn’t change like that for love; it wouldn’t be love at all. If anything, it is love that changes us, transforms us, makes us better than who we are.

Regret is never a dependable friend. It invariably arrives late, and hardly ever rescues anyone from trouble.

You will discover the limits of your power only when you use it to its full extent.

I enjoyed this book for how after all the nightmarish troubles, our heroes finally get to see the end of their struggles. How every battle and journey brings them to a new solution, changes and new ways of life while secure in their friendship and love, they look forward to build the City together.

The book is a very good thrilling read, in spite of a few typographical errors. It is also a bit pricey, so we took advantage of it being available to read on Kindle Unlimited and can recommend the same to you, if you have a few hours to spend in the world of Vikramaditya and his Avanti.

In summary, an adventurous and entertaining end in the battles to protect the Halahala by Samrat Vikramaditya and his Council of Nine…